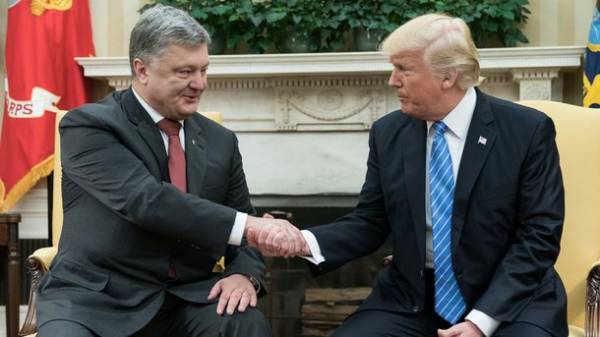 The President of Ukraine Petro Poroshenko, who is now in new York with a working visit at the 72nd UN General Assembly on Thursday will meet with the leader of the United States Donald trump. “Today” has learned that will discuss the presidency among themselves, and to speak about what Poroshenko from the rostrum of the UN.

THE “BLUE HELMETS”. The General Assembly officially opened last Tuesday, however, the “high politics week” starts today until Friday from the podium must be the representatives of all States members of the United Nations. Ukrainian President will participate in the summit of the UN security Council on the reform of the organization and countering use of the Internet for terrorist purposes.

With the Central rostrum of the UN General Assembly, the guarantor will perform tomorrow. The representative of Ukraine to the United Nations Volodymyr Yelchenko noted that necessarily raised the issue of peacekeepers: “It will be another opportunity to speak about our vision of the role of the UN in the Donbas.”

Recall that one of the main themes of last week was the initiative of the Russian Federation on the introduction of peacekeepers in the East of Ukraine. The Kremlin proposes the establishment of an armed UN mission to protect OSCE observers. The backbone of “blue helmets”, according to Russia must be Russians. The main nuance — the peacemakers will not be admitted to our country uncontrolled sections of the Russian-Ukrainian border.

However, the Minister of foreign Affairs Pavlo Klimkin stressed that in the Donbass no place for a Russian protectorate, and peacekeepers should have access to all sections of the border. In turn, President’s representative in the Verkhovna Rada Iryna Lutsenko said yesterday that Poroshenko will insist on an expanded mandate of UN peacekeepers to maintain peace which will allow the “blue helmets” to use weapons if necessary, and not only for self-defense.

THE SECOND RENDEZVOUS. On the sidelines of the UN General Assembly Ukrainian President for the second time will meet with his American counterpart. This will be their second meeting — the first time Poroshenko and trump talked in June this year. “This time, it is important to outline concrete plans for interaction on key issues in the areas of global and regional security, defense, economic and energy cooperation”, — said in his page on the social network Ambassador of Ukraine to the United States Valeriy Chaly. Appreciates the fact of the meeting and the special envoy of the state Department on Ukraine Kurt Volker: “it is Very good that they will meet. They have a lot to talk about, including what is happening in the Donbas, reforms in Ukraine, corruption and the idea of a peacekeeping mission of the UN.”

Politekspert Eugene Magda notes that the discussion with the peacekeepers — good initiative. “Ukraine should launch its own initiatives not to be the object and subject. I remind you, Yelchenko last week said that the Russian resolution did not find understanding in the UN security Council. The Ukrainian project is guaranteed to exist, although not yet registered. So there is quite a subtle diplomatic game.”

Magda also notes that trump will meet not only with the Ukrainian leader, but also with the presidents of Turkey and Afghanistan: “This is the country in which Russia is somehow threatening situation. So is this the reincarnation of the USA in the role of a Crusader of democracy, which in itself is also very interesting.”

Well, according to political analyst Vladimir Fesenko, the second meeting of leaders will be more working character, she needs to compare notes and to follow up on previous agreements. “Can be any breakthroughs, I do not exclude it, but a new phase of the negotiations required more for coordination of further actions”, — he concluded.