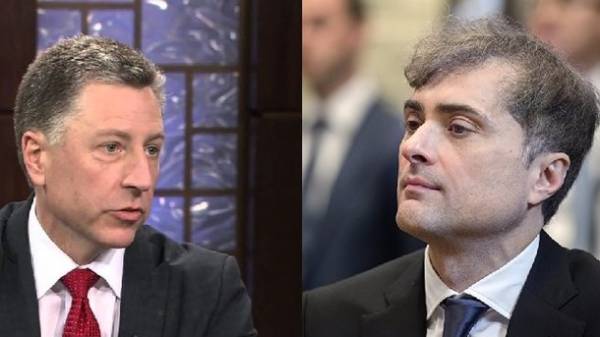 Today in Minsk will host the first meeting, state Department special envoy on Ukraine with Kurt Volker, assistant to the President of the Russian Federation Vladislav Surkov – the architect of the annexation of Crimea and the war in the Donbass. The meeting will be informational rather than critical. Before that Surkov was in talks with Victoria Nuland, assistant Secretary of state for Europe and Eurasia, therefore, the Volcker harsh criticism of Russia and supporter of granting Ukraine lethal weapons, he will still look.

According to Kurt Volker, before the presidential elections in Russia in March 2018 have a small window of opportunity to move Minsk forward. But we can hardly expect that Moscow will release Ukraine from its orbit of influence. According to experts, the annexation of the Crimea and war on Donbass, the Russian Federation is trying not to let Ukraine into the EU and NATO, and to keep, in her opinion, extending the “expansion” of NATO on its borders. Besides, according to analysts, Moscow considers Ukraine part of Russia, a country that has no right not Independence. In this regard, in the negotiations with Surkov Volker will not be easy. But immediately after the meeting with the assistant to the President of the Russian Federation in Minsk the representative of the state Department will return to Ukraine, where, together with U.S. Secretary of defense James Mattis will take part in the celebration of the Independence Day of Ukraine. Symbolic – and Putin is very fond of symbolism, even the elections of the President of Russia was moved to the day of the annexation of Crimea on 18 March – that Mattis arrives in Ukraine is August 24th. It is not only a manifestation of U.S. support for Ukraine, but also kind of a big “hi” to Vladimir Putin.

Special envoy of the state Department on Ukraine Volcker was appointed on 7 July after a long pause in Russian-American talks on Ukraine. The news came just a couple of hours before the first match, trump and Putin at the G20 summit in Hamburg. It should be noted that the position of “special envoy” (or, as it is called in the United States – special envoy) new, previously for all 26 years of bilateral relations between Ukraine and the United States Department of State was not the individual official who would be responsible for a specific European country. Specialization assistant Secretary of state shared across regions and specific areas. Under Barack Obama’s assistant Secretary of state for Europe and Eurasia was Victoria Nuland.

Her responsibilities included coordination and the Ukrainian issue with the Russian presidential aide Vladislav Surkov, who is called the architect of annexation of Crimea and the subsequent Russian military intervention in Donbass. And not always their arrangement was pleasing to the Ukraine as Nuland attributed the almost friendly relations with the assistant to the President of Russia. A vivid example – the meeting Nuland and Surkov in January 2016 in Kaliningrad. After a long 6-czasowych talks in leaked details of a plan to implement the Minsk agreements, which were as follows: first, elections in Donbass and the change of the Ukrainian Constitution, where the militants are demanding to fix the special status (and in fact, to turn Ukraine almost in a Confederation), then the border control and Amnesty.

Then the Ukrainian diplomacy managed to clearly explain to his American and European friends why the agreement Nuland and Surkov in any case can precede in life, why Russia must first withdraw its soldiers and equipment from the Donbass and to give us control of the border, and only then about the elections and Amnesty to say. Kurt Volker is different. First, it is known as a man of Senator John McCain – American “hawk”, a harsh criticism of Putin, of the lawyer of Ukraine on Capitol hill, who always calls to give us a lethal weapon. Kurt Volker, former US Ambassador to NATO, is Executive Director of the Institute for international leadership, McCain at the University of Arizona, an expert just in the European region and Russia.

After the appointment, Kurt Volker, many American experts said that this kind of political victim of Donald trump, well, you see, USA has appointed hard Russian criticism of the special representative of the state Department of Ukraine about any rapprochement with the Kremlin can be a speech? Some truth in this, as scandals about Russia’s interference in the American presidential election and relations of the environment trump with the Russians do not cease. Therefore, in agreeing to the nomination of Volker, trump could try to reduce the degree of tension on Capitol hill.

To get acquainted with Ukraine Kurt Volker came together with U.S. Secretary of state on 9 July – just after the G20 summit Rex Tillerson arrived on a visit to Ukraine. Here, the special representative met with the Ukrainian President, the press and parliamentarians. Later on July 21 with a delegation of the state Department visited the Donbass, where he said that this is not a frozen conflict, but a real war. “This is a crisis that requires urgent attention that needs to be addressed as soon as possible. Too high a price to pay as residents of controlled and temporarily beyond the control of Kiev territories of Donbass”, – said Walker at a press conference in Kramatorsk.

Kurt Waller prefers the transatlantic format of negotiations on Donbas, stressing that ending the war in 2018 is still a small window of opportunity, given the upcoming presidential elections in Russia in March 2018. The special representative supports McCain on the issue of granting Ukraine lethal weapons, because, according to him, on Donbass the Russian tanks more than all of Western Europe combined. “If we adopt this solution, it will give Ukraine the ability to defend themselves in case if Russia takes further steps on Ukrainian territory. Russia says it does nothing and is not going to do that. And if so, the delivery of protective arms is not responsible then for anyone no risk,” said Walker in an interview.

Breakthrough after today’s meeting, Kurt Volker, Vladislav Surkov should not wait. According to American scientists and experts, the new special representative of the Department of state will not surrender the interests of Ukraine and not to make concessions to the Kremlin. Certainly, the parties will discuss step-by-step execution plan of the Minsk agreement – a roadmap, or a so-called Plan of Macron. Walker will insist that the first in the Donbass must prevail, a stable ceasefire, Russia must withdraw its soldiers and equipment, give Ukraine control of the border, and only then to talk about the elections. But to expect immediate concessions from the Russian side is not necessary. In the author’s article for the National Interest Director of the Center for Eurasian, Russian and East European studies at Georgetown University Angela Stent writes that the prospects for the implementation of the Minsk agreements is very vague.

“First, the basis of the Ukrainian crisis is the contradiction of the understanding between Moscow and Washington a legitimate Russian sphere of influence. While Moscow feels it has the right to play a role in the politics of their neighbors, Washington insists that Russia should not have voting rights in the post-Soviet countries. Second, Russia has long opposed what it calls the endless expansion of NATO, considering the events of February 2014 (in Ukraine – Ed.) as a first step, which, ultimately, will lead Ukraine to join NATO”, – wrote the General Director of the Russian international Affairs Council Andrey Kortunov and senior Advisor and Director of the program “Russia and Eurasia” Center for strategic and international studies (CSIS) Olga Oliker in the report “Road map for U.S. relations-Russia”.

In an interview with “Today,” senior program Director of the Berlin Marshall Fund “Germany-USA” Joerg Forbrig said that annexing Crimea and starting a war in the Donbas, Russia tries to divert Ukraine from the reforms and to freeze our integration into the EU and NATO. According to former U.S. Ambassador to Ukraine Steven Pifer, strategy of Russia for almost three years, is to use “kipachi” the conflict in the Donbas to exert pressure, to distract and destabilize the Ukrainian government. “And, apparently, maintaining the “boiling” of the conflict is consistent with the objectives of the Kremlin, we saw the attempts of Russia to implement the second Minsk agreement”, – said the “Today” Steven Pifer.

Analyst of the Institute of world politics Nicholas Beleskov believes that the Ukrainian side managed to convince the U.S. special envoy that the approach of the official Kiev is a way to solve the conflict based on the Minsk agreements. “Therefore Vladislav Surkov Walker can be a very difficult interlocutor in terms of attempts to persuade to change the opinion of the American special envoy. And that is the problem, if you believe the Russian media, set himself the representative of the Russian Federation. At the talks in Minsk Vladislav Surkov is expected to attempt to present the Minsk agreement as involving the political process (local elections, special status) before the restoration of the sovereignty and territorial integrity of Ukraine in the East, or at least parallel the implementation of security and political agreements between Ukraine and the separatists respectively,” – said the “Today” Nicholas Beleskov.