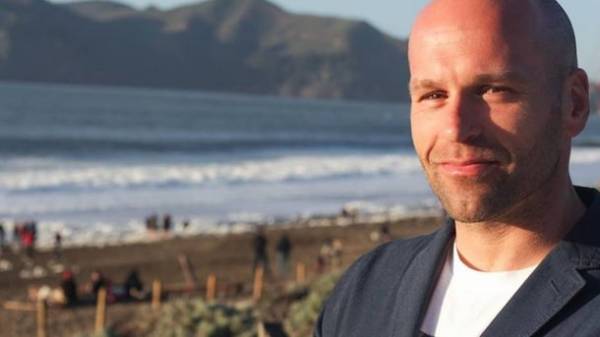 American traveler from San Francisco Peter Santello wanted to see Ukraine and after six months of living in Kiev decided to stay in the seaside near the village Osipenko Berdyansk. Yet desperate Americans like everything, except fat: soup, and stuffy compartment, and most of all our wonderful people.

FIRST IMPRESSIONS. Toward the sea, Peter went from Kiev to the usual second-class carriage, vpechatleniem his sincerity. “It’s something very communal and social. Get all your stuff, relax, read, drink beer, eat chocolate, and I like it,” said Peter in his video blog.

But in the village the traveler liking “paintings of sunflowers, yellow field, blue sky and… gold teeth” smiling he retirees! Family of immigrants from the Town that sheltered Peter immediately took him to the local bus, learned to dig potatoes, and mow the grass.

FROG AND THE WELL. On this adventure, Santello not ended — next day Asipenka began at 4:00 with a prayer, which is accepted in the family. In addition, a traveler adapted to visit the outdoor toilet, shaving over the bathroom drain and dip from the kettle.

The same day Peter got acquainted with the traditional way of finding a place for the well, and in fact by digging. “We’ve got a neighbor with small metal thing in his hands that just spin — they found us a place with water where to dig a well”, — vostorgina reports Santella. Although he was surprised by the lack of special equipment for drilling, he did not panic when he was handed a shovel, and together with the owner dug a pretty deep hole. While working he listened to Russian rock, and even managed to sing along.

Also, the American managed to eat Ukrainian mulberry and even frogs, caught in the local river on the “hunt”! Peter tried frogs for the first time, but admitted that they were delicious.

ONUKA AND THE FLY. The “today” Santello said that excited about the soup: “Just a great dish, and all the greens in it — it’s delicious! But the bacon and sausage I didn’t like”. Peter also mentioned that I don’t drink Ukrainian vodka — a long time to quit drinking. From a nice Ukrainian music groups, Santello called the singer ONUKA. But the most unusual thing he did in Ukraine — it ate a fly: “yesterday I ate a fly, I don’t know why. Just grabbed by hand and actually ate it,” said Peter to us.

But especially, Santello admires the people and the family that adopted him, “they Have a lot to learn and Ukrainians, and Americans. They are not very rich, but in spite of this, a very positive and happy, whatever happened.” The plans for the American to go away for a month in EU Affairs, and then again to return to Kiev.

OPINIONS. The network does not get tired to discuss the project, Peter Santello about life in Ukrainian village. Among the commentators — the majority of Ukrainians. “It’s really cool to see, as an American living in our country!” “Good luck, Peter!” — they write. In turn, the compatriots also discuss the videos of the blogger. “I survived, so can you” — encouraged the user Glen Taylor, which already went to Ukraine. Another user, after watching the adventures of Peter, wants to come and visit us, and some do want to try our frogs to the taste.