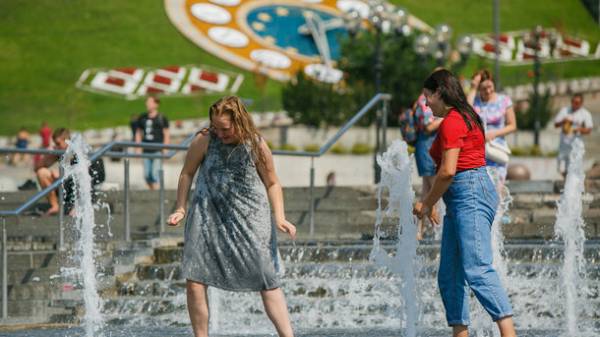 In Ukraine in the next few days are expected to be hot and overcast weather. Next week the storm cyclone will move from the West to the East of the country. While most of the country the thermometer to climb above 30 degrees Celsius. The website “Today” found out what weather to expect Ukrainians.

Sunday, August 13, is expected to significantly cold in the West of the country. Here the air warms only to 23-25 degrees – will be thunderstorms. The rest of the weather forecasters predict hot weather and variable cloud. In the South, the thermometer will rise to 34-36 degrees, in the East, centre and North the temperature will oscillate in the range of 31-33 degrees. 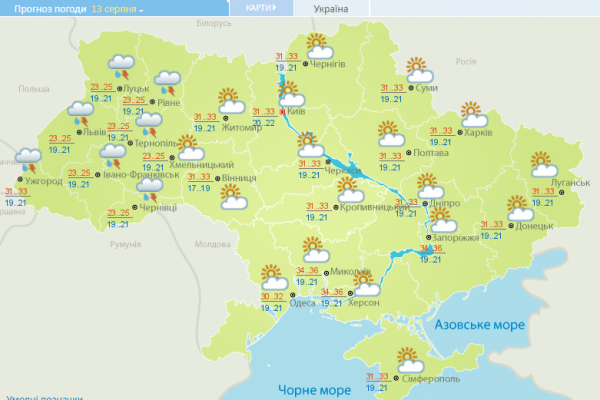 Monday storm system moved into southern Ukraine. Here, the temperatures will rise during the day to 30-32 degrees. A slight cold is expected in the centre and North. Thus, in Chernihiv region the temperature will range from 26 to 28 degrees, and in the West in the afternoon the air warms up to 23-25 degrees.

Relatively hot weather expected in the East. In the Donetsk region is expected warming up to 35 degrees during the day. In the center of the country – from 30 to 32 degrees. 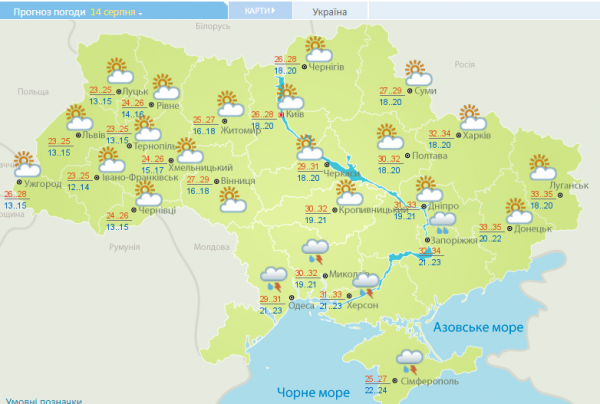 On Tuesday, August 15, in Kharkiv, Luhansk and Donetsk regions are expected thunderstorms, the rest of the – partly cloudy. The temperature will vary between 31-33 degrees Celsius. In the South, perhaps warming up to 33-35 degrees. In the center of Ukraine air temperature will fluctuate in the range of 30-32 degrees. On the North and West the temperature will range from 24 to 26 degrees.
National weather forecast

August 13 is the day of remembrance of the righteous Evdokim, informs a portal “Weatherman”. In people, this day is called Evdokimova eve, since August 14 the Dormition fast begins today. In the old days our ancestors followed Evdokim for the sunrise: if the sun is when the sunrise is bright red and soon hiding in the clouds, you can expect rain.

August 14 marks the feast of the Descent of the cross (First Saved). Our ancestors told that the Saviour of all in stock: and the rain and the wind, and raznopolaja, that is, the weather on this day was difficult to predict. If after all this day it will rain, the little fires happen. From this day begins the end of summer party, may be the first early night frost, the beginning of the cold grew.

15 August marks the transfer from Jerusalem to Constantinople of the relics of Protomartyr Stephen (Stepan). Stepan is the patron Saint of horses. Our ancestors noticed – what is the weather in Stepan, such is September. And by the way, what days 15-19 of August, determined the weather in September-January.

16 Aug revered the memory of the monk Anthony the Roman, Wonderworker of Novgorod. The people of St. Anton called Vihrova, as this day is often wind, by which to judge the coming winter. If Anton’s vortex, expect a snowy winter. Back in the old days noticed, what is this day, like Oct.

August 17 is the commemoration day of St. Evdokia (Avdotya). Rains at this time are in broad daylight, no lightning and thunder. On this day judged on next November: “What is Avdotya is November.” If the day is Sunny, clear, and November will be fine, and if it is overcast and raining to be grey and foggy.