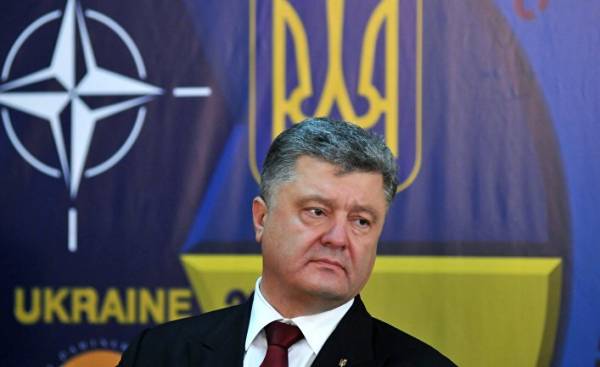 When the American political leadership possesses himself, it is, as a rule, give up the intention to involve our country in Ukrainian Affairs. So the calls to arm the Ukraine, played this week from the lips of lawmakers and analysts are a sign that the scandalous news about the connections of trump and Russia are completely messed up our political class.

Sending weapons to Kiev today is as meaningless as two years ago. You may remember when this topic surfaced in recent times. In 2015, fearing that Western-backed coup forever will push Ukraine out of the Russian sphere of influence, Vladimir Putin took the risk to keep access to the Kremlin’s black sea fleet, and annexed the Crimea. Contrary to popular belief this was not a demonstration of the Kremlin’s power, but an extreme measure. Truly a strong Russia would keep Kiev under control and keep access to the Black sea without the assistance of the armed forces. In fact, in 2010, Putin used his own popularity in Ukraine, and also diplomatic power of Russia to help the candidate whom he favored — highly corrupt crook Viktor Yanukovych to win the presidential election.

Ukraine is a deeply divided country. The last presidential election revealed a serious conflict between the agrarian, Ukrainian-speaking North and West, on the one hand, and Russian-speaking South and East. As a state she is also especially nothing to brag about. Successive governments in Kiev have been ineffective and / or hopelessly corrupt. Even the Western-backed Viktor Yushchenko dissolving Parliament in 2007, it seems, illegally taken over the Ukrainian court. Stable democracy Ukraine can not be called.

In addition, many Russian believe that the history of this country is closely intertwined with their own. The anti-Communist dissident Aleksandr Solzhenitsyn partly summed up Russia’s attitude to Ukraine, in 1990, writing: “It’s all invented recently the hypocrisy that almost from the IX century there was a special Ukrainian people with a special non-Russian language”.

Poland lost Kiev to Peter the great in 1690-ies. Needless to say that the history of relations between Russia and Ukraine in its duration can not be compared with that claimed by the United States. Periodically raised the issue of Ukraine’s membership in NATO, but to defend Ukraine, which is also little can contribute to the Alliance, it will be much harder than other countries, partly because its government is so in debt to the Russian government.

And Yes, Putin’s government continues to incite Pro-Russian unrest and separatism in the Donetsk region. However, providing Ukraine with antitank weapons is essentially constrain aggression of Moscow. Russia is a huge land power, in the Arsenal which has over 20 thousand tanks. Over the last two decades of the brutal Chechen wars of the Russian state and the Russian public has already proven its willingness to lose troops in battle. Russia has many economic levers of influence on Ukraine, those which the West couldn’t oppose anything, except now unimaginable commitments of political will and cash. Sending arms to Kiev will only pour water on the hands of Putin, who keeps talking about the Western intervention, this rhetoric has proven immensely successful in the buildup of the target audience: Russian-speaking Ukrainians perceive the United States as an accomplice in the denial of democratic results 2015, may the protection of these results is that they cheated to make them honest and fair.

In the end, Ukraine is on the periphery of the interests of the United States and Western Europe, even today all so like to irritate Russia. Sending Ukraine weapons or giving it a kind of membership in NATO, possibly, will irritate Russia, but it will also create for US a new dependent. And may encourage Ukrainian nationalists to do something stupid like the provocative actions of Mikhail Saakashvili, who in 2007 put Georgia at risk of believing that can count on support from the West.

To punish Russia is an obvious priority for our leaders today. But arming Ukraine would mean the escalation of tensions there, where American involvement can bring less benefit and is not credible. There are other, better, ways to annoy Vladimir Putin. Should take them on Board.