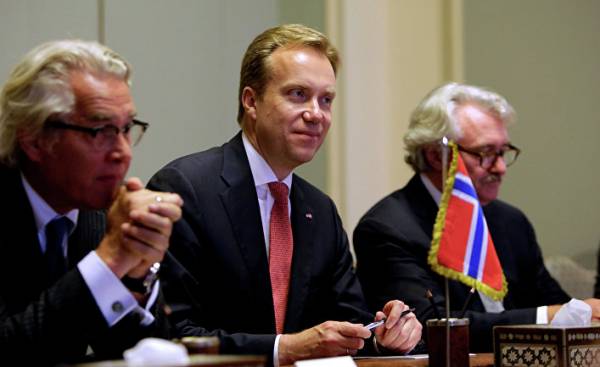 The speaker of the “Party of progress” on foreign policy issues asks the Minister of foreign Affairs of Norway (“Right”) to actively speak in favour of sanctions against Russia, imposed in response to the occupation of the Crimea, were removed.

Now, Tubring-Yedda urges that the Minister of foreign Affairs børge Brende and Norway would take over Europe’s role in initiating the lifting of sanctions.

“We must realize that Russia is not going to give the Crimea”, — he said in an interview with Aftenposten.

“But the Russians must accept and fulfill the Minsk agreements, which ensure peace and stability in the East of Ukraine. When this happens, sanctions should be lifted”.

Aftenposten: Norway Should take the initiative and to advocate for the lifting of sanctions?

“Yes. This issue is now being discussed in Europe and I believe that Norway should discuss it with the European leaders and fight for the lifting of sanctions,” says Tybring-Yedda.

Brand: It is not the government’s position

Foreign Minister børge Brende strongly rejects the possibility that he will act with such initiative.

“As well as the EU, Norway understands that the key to the lifting of restrictive measures is in the hands of Russia. Sanctions will be lifted in that moment, when Russia will comply with international law and withdraw Russian troops from Eastern Ukraine, will cease to destabilize the situation in the Donbas and to support Pro-Russian separatists will follow the first and second Minsk agreement and cease to Annex Crimea,” says the Brand.

He argues that the opinion of Tubing-Iedge “do not reflect the views of the government.”

“Government “Right-wing” a” and “Party of progress” have widespread support in the Storting regarding Norway’s accession to the restrictive measures”.

Ms. Huitfeldt (Anniken Huitfeldt), foreign policy speaker of the Norwegian labour party, believes that it is important to find solutions that would help to improve relations with Russia.

“But I would like to warn Norway to act alone. It is now important to guide the relationship between the US and Russia on a better course”.

She responds that “the foreign policy speaker of the party, a member of the government, acts so important to Norway issue against his own government.”

“Tubing-Jedda is Deputy Chairman on international Affairs of the party, a member of the government. Its signals are heard in other countries. Thus, Norway’s position becomes quite clear. Therefore, it would be natural if, Solberg (Prime Minister of Norway, Erna, Solberg — approx.ed.) and the Brand will explain whether, in their opinion, if the party that is a member of the government, based on the signals of this kind,” she said.

“Suffer the interests of Norway”

“The new sanctions impose restrictions on economic cooperation with Russia. They may have direct consequences for cooperation between Norwegian and Russian companies oil and gas companies,” says Tybring-Yedda.

It also indicates that can hurt the interests of Norwegian owners in Russia.

With Washington and Moscow, it is necessary to speak clearly

Tybring-Jedda asks the Minister of foreign Affairs to make clear to the Americans that the new sanctions will have consequences for the Norwegian economy and for Norwegian relations with Russia.

“So the Minister of foreign Affairs should be clearly defined before US that the new sanctions will have negative consequences for Norway and other allies.”

“And we need to make clear to the Russians that the Norwegian interests in this case coincide with the interests of the United States.”

Tybring-Yedda believes that the new sanctions may cause uncertainty in whether Norway predictable and reliable supplier of gas.

“Sanctions can cause the pipelines to be built, is built. This has a negative impact on European oil and gas sector, and this could potentially benefit the United States.”

The reaction in Europe

Tybring-Jedda also refers to the fact that the new us sanctions cause certain reaction in Europe. The Minister of economy of Germany Sigmar Gabriel earlier this week called on the EU to respond to new us sanctions which, in his opinion, a blow to the German companies cooperating with Russian energy companies in the construction of a gas pipeline between Russia and Europe.

The brand says will be very careful “evaluation of the relevance of the” new American sanctions.

“However, we would like to stress that some provisions in the bill adopted by the Senate, from the Norwegian point of view, are better compared to the project that the Senate approved in June.”

The brand says that Norway has closely followed the work on the bill to assess the possible implications for the Norwegian shelf and Norwegian companies.

“Norway was in contact with members of Congress. With the Norwegian position they are familiar. We feel that we are listening,” says the Brand.

“However, it would be proper to add that the bill goes against the coordinated convergence of the USA and Europe in matters concerning the measures against Russia. Norway therefore shares the concerns of Germany, France and the European Commission in connection with the fact that the process is in place, and in the aftermath of some of the new measures.”