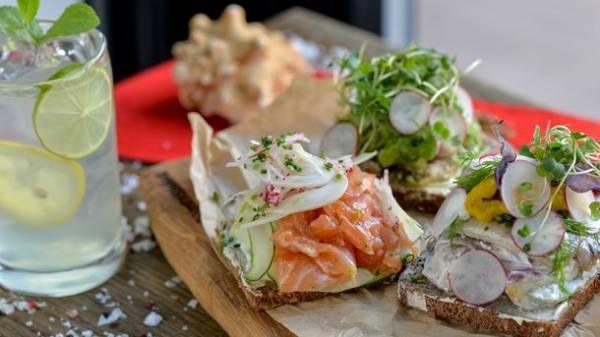 For Ukrainian borsch, or dumplings, for the Dane — smorrebrod (aka smørrebrød). It is the Northern relative of the usual open sandwich. As soups for lunch in Denmark have not been accepted (and until today they do not favor), the Danish sandwich in the kitchen, one for all — and for the first, and second.

To cope with this problem, the filling should be more. That began the Danes to build a whole edible tower. Their “Foundation” — a piece of whole grain rye bread made with sourdough, usually with seeds (sometimes used dried white bread). Further — thick layer of “cement” — butter. Well, then go to the “floors” — a variety of toppings: fish in all interpretations (marinated, smoked, dried), ham, sausages, pates, vegetables, sauces, plates of jellied meat or fish broth, boiled eggs, etc. on top of all this building the “roof” — herbs, vegetable slices, etc. And it is so lush that to guess what is hiding under this hat, quite difficult.

All this construction is, of course, bare hands can not take. So smorrebrod, usually served Cutlery.

List the products that comprise the king of Danish cuisine is endless. Confirmation of this menu in one and a half meters in length, which at the beginning of the last century was composed of 178 variants of this dish. It even entered in the Guinness Book of records — as the longest in the world.

Now connoisseurs counted more than seven hundred kinds smorrebrod. By the way, in Denmark like to call them in honor of famous people. For example, in the restaurant to order the “Hans Christian Andersen”: born this gastronomic “double” due to the fact that one of the Danish restaurateur, having examined the diaries of the storyteller, found there mention of the food of which he loved to construct your smorrebrod. It was the standard rye bread and butter, fried bacon, liver pate, tomato, plate of jellied beef broth, grated fresh horse radish root and top leaves of parsley. In General, lip, Anderson was no fool, and he did, according to this description, on a full stomach.

It is clear that learning to cook smorrebrod not on the writer’s diaries. In Denmark there are special schools in which three years of future smorrebrod drill how to harmoniously combine all sorts of toppings and taste, and appearance.

Because a sandwich should look like the picture. Called graduates of these culinary institutions smorrebrods jomfru, which literally translates as “the sandwich girl”. “One” of them came up with a hybrid of smorrebrod and sushi, which was named smushy. This mini-sandwiches, which is used instead of rice bread. In General, turned out to be cooking Scandinavian-Japanese half-breed.

In Ukraine, too, can find the result of mixing Danish and Ukrainian cuisine, for example, smorrebrod with bacon and black pudding. But I advise you to try these culinary delights after the acquaintance with the classic fish smorrebrod. Their recipes with the readers of the newspaper “Today” shared the chef Metropolitan café Smørrebrød Denis Dergun. 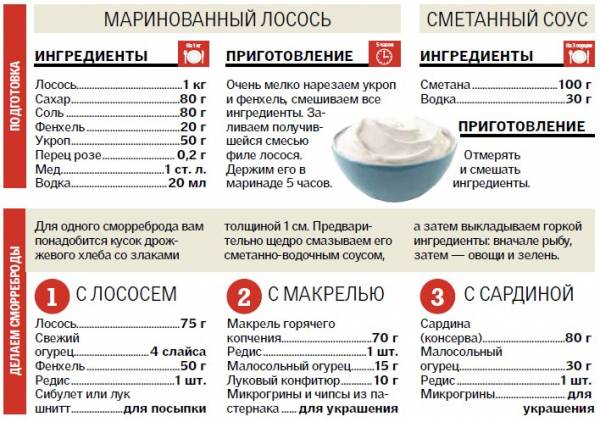