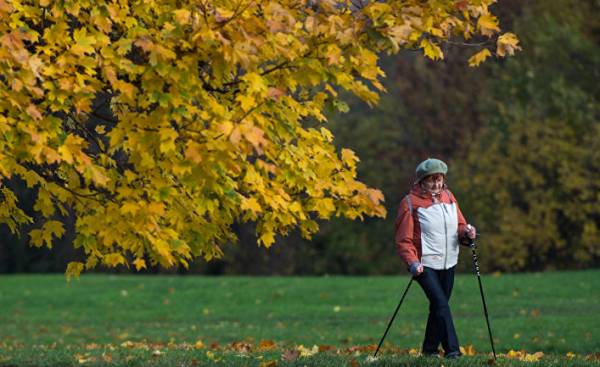 Journalist give the blue mask made of soft plastic, on the chest clip the heart rate monitor, top wear a vest, the pockets of which are sensors. Then the subject goes for a run. The journalist needs to be cut at a fast pace, then walk the same distance with sports sticks. Sensors measure the amount of inhaled oxygen volume and the exhaled carbon dioxide and heart rate.

The journalist plays the role of subject in the faculty of Biomedicine of the University of Eastern Finland. The researchers got the portable analyzer of inspired and expired gases, which is tested throughout the spring and summer of this year.

“In the autumn we will start to carry out measurements in which we find features of oxygen consumption during normal fast walking and Nordic walking,” says associate Professor of Venari Mika (Mika Venojärvi).

The purpose of the experiment is to find out how much more energy is expended during Nordic walking than during normal fast walking. On the basis of earlier studies, it was observed that the sports sticks increase the efficiency of the walk by approximately 20%.

This year will be 20 years since they started selling the first poles designed for Nordic walking in Finland started to learn to walk with them. Judging by the polls, now enjoys Nordic walking approximately 1.5 million Finns. Accurate data are not available.

Researchers Nordic walking in the University of Eastern Finland this year, too, may be noted a kind of anniversary: exactly ten years ago, the University began a study of the influence of Nordic walking on health. At the moment, the group has produced at least six research articles, ten master thesis and one PhD thesis.

According to Venari, the most important result of the research was the fact that Nordic walking has proven to be extremely useful for people suffering from metabolic syndrome and for people with risk of developing cardiovascular disease or diabetes.

Similar results can be achieved for example by Jogging, but overweight people are unlikely to run as much as they can go with the Nordic sticks. Using the correct Nordic walking technique, you can achieve the same effect as from Jogging, thus avoiding excessive fatigue.

Of particular interest is the positive effect of Nordic walking on people with Parkinson’s disease.

“For 5-10 years on this topic was conducted about 20 research studies, most of the results were very promising. However, it is necessary to conduct more detailed research,” says Mika, Venially.

In Kuopio, there is ongoing research which will be able to specify the influence of Nordic walking on health. In the fall, Venari will get a muscle biopsy.

Fans of Nordic walking took small samples of muscle tissue of the thighs before and after 12 weeks of research. As a result of study design is established the effect of exercise on the muscular level: does Nordic walking, for example, on the metabolism of glucose or fats.

Earlier it was revealed that the exercises in the hall contribute to the growth humanin protein in the muscle tissue of men. This could positively affect the glucose tolerance, which in turn can prevent occurrence of type II diabetes.

The study of samples of muscle tissue — the part of the Finnish-Swedish study. It compares the performance of the group, which is engaged in Nordic walking, the group engaged in power loads, and the control group for 12 weeks and six months and one year after the study.

The results of those doing Nordic walking, pretty good. The best impact on the indicators associated with metabolic syndrome, it was observed that the group which was engaged in Nordic walking.

“It is important to note that after the study, about 80% of people continued to engage in Nordic walking and to train in the gym continued only 40% of the subjects,” says Venially.

Grandmothers should go in the hall

They say that Nordic walking, which worked in Finland, has become very popular around the world. Research on this topic, however, is not.

“According to some estimates, Nordic walking enjoys around 15 million people worldwide. This sport has become particularly popular in European countries such as Germany, Poland, Italy and Spain. In China, many also became interested in Nordic walking. In Japan, the USA and Australia also go with sticks,” says Venially.

In Finland, many people continue to believe that Nordic walking is a sport for grannies. However, the leading Finnish athletes — for example, biathlete Kaisa Mäkäräinen (Kaisa Mäkäräinen) — are engaged in Nordic walking. Venially, and advises young people who love going to the gym, to take an example from grandmothers. Long walks with sticks help to develop endurance, which is very important in case of cardiovascular diseases.

Grandparents, too, could take an example from young. Only one Nordic walking is not enough. Different types of loads are important for the elderly.

“Elderly people should follow their muscles. Every week needed as trainings in the gym, and Nordic walking”.

With the test results of exhaled and inhaled gases, we return to the lab to see what was recorded by sensors that were fixed to the journalist during normal fast walking and Nordic walking.

“As in extensive research, even according to these results, the marked differences between fast walking and Nordic walking. Heart rate stayed smooth, and calories burned successfully”, — said Venially.

Looks like it’s time to get out of the closet old sticks for Nordic walking. 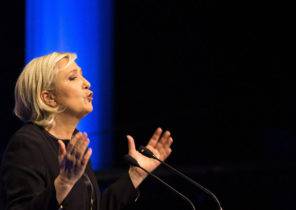 Wirtualna Polska (Poland): a controversial draft law on the subject of the Molotov — Ribbentrop Pact