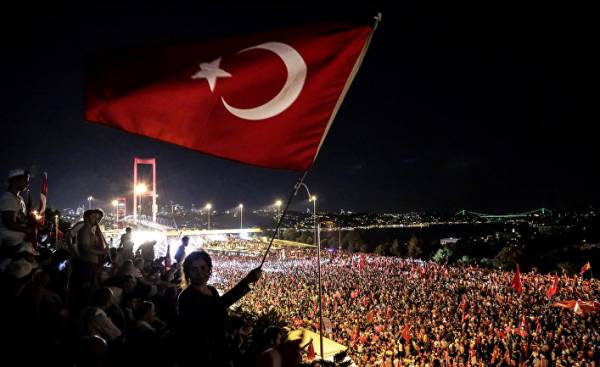 Last year’s attempted coup has been very dramatic. Military F-16 fighter jets controlled by the rebels, attacked the Turkish Parliament, which killed 249 people. But the rebels failed to capture the President Recep Tayyip Erdogan, who in time has mobilized his supporters and predetermined thus the fate of the revolution. If the coup had not been snuffed out within 48 hours, Turkey probably would have plunged into a destructive and bloody civil war, whose consequences would spread far beyond its borders.

Today in Turkey it is very difficult to find someone who would doubt that the coup was organized by the forces loyal to the mysterious Muslim preacher Fethullah gülen living in Pennsylvania. All the evidence seems to support this conclusion. When Erdogan and his Party of justice and development party (AKP) came to power democratically in 2002, they joined forces with gulenists to reset the old, authoritarian establishment and to send Turkish democracy in the course of EU accession.

But the ambitions of gulenists was much wider, corresponding to the tradition of secrecy, which originated here during the military dictatorships, when many of the religious activists in Turkey had to go underground. Since 2002 gulenist were introduced in the police and the courts, using the position to show trials and arrests of his opponents. It was at the hearing. But few knew how deeply they got into the air force and the gendarmerie.

In 2013, the way the AKP and gulenists broke that marked the beginning of a silent civil war. Given the duration of this confrontation, we can really conclude that the failure of last year’s coup is a desperate attempt of gulenists to seize power before their supporters will be expelled from the army.

Faced with such a wide network of subversive elements, the Turkish state no doubt needs cleaning and refurbishment. But for the future of democracy is very important to combating internal threats took place with the observance of laws and human rights with the support of Turkish society.

Unfortunately, some of the components of the response of erdoğan in last year’s coup attempt raises serious concerns. Out of 100 thousand detained, formally arrested and more than 50 thousand. Including minimum 169 generals and admirals, 7 thousands of colonels and Junior officers, 8 thousand 800 police officers, 24 heads of local governments, 2 thousand 400 members of the judiciary and 31 thousand other suspects.

However, many have lost their jobs, left without any future prospects. Were closed independent media, and in the last two weeks arrested several prominent human rights defenders (including the Director of Amnesty International in Turkey) at the absurd charges of supporting terrorism.

As a result, failed coup, the Turkish public initially banded together under the control of Erdogan. But now his actions polarize Turkey. In an attempt to cope with the security threats the government has expanded the network of its agents. And pushed through constitutional changes in a referendum, against whom spoke almost half of the country, including young voters. When the changes come into force, the Turkish political system will find a new format, and in the hands of the President will be all branches of government.

This retreat from the principles of the first decade of the reign of the AKP. Then Turkey was engaged in the modernization of the economy, development of democratic institutions and the provision of Kurdish citizens the full spectrum of civil rights. Serious progress in those years was fueled by hopes for a European future.

But now the future seems more uncertain. If the Turkish government by early next year will begin to show respect for human rights and the rule of law, it will put an end to the European prospects of the country. The chances of Turkey joining the EU has decreased after the failure of negotiations on peace and reunification of Cyprus. However, we cannot blame only the Turkish side. In addition, the EU has lately been directed as much rhetorical abuse that the Turkish government began to look politically toxic in the eyes of many of the key EU States, including Germany.

Without a political anchor and the prospect of EU accession — Turkish modernization can start moving in the opposite direction. And if that happens, the country will quickly suck the middle East quagmire. Turkey has made great efforts to host the millions of refugees from Syria, becoming an active participant in the conflict in that country. Moreover, Erdogan decided to drag Turkey into a diplomatic row between Qatar and other Gulf States.

The future of Turkey is of great importance, as Ankara hesitates between Europe and the Middle East. Soon the population will consist of 100 million people, besides it has considerable economic potential. The history of Europe cannot be written without Turkey, as well as the history of Turkey without Europe. If she chooses the path to EU membership, it will help to overcome differences in culture and traditions, which otherwise will threaten the whole of Europe.

But the political wars threaten that future of Turkey. The consequences of the failed coup could bring healing. Instead, they have become a real bone of contention. It is not yet too late to choose a different path, but time is getting smaller.