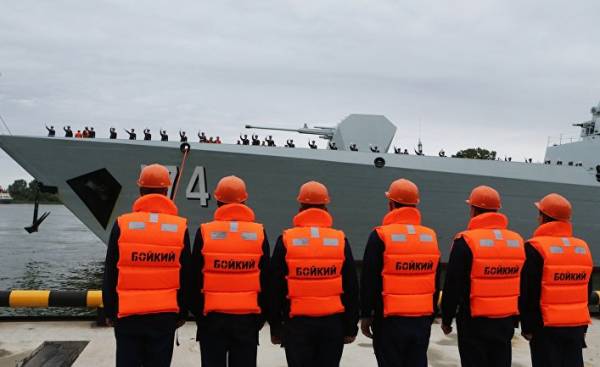 Three warships from distant China to protect the economic interests of Beijing and also in the Baltic sea. So goes one of the official justifications, the first Chinese-Russian naval exercises there, near the Swedish island of Gotland and also not so far from Bornholm, belonging to country-a NATO member Denmark. From the port of the Russian enclave of Kaliningrad came in the way to participate in the exercises “Sea interaction — 2017″ (the”Joint Sea 2017”) modern Chinese destroyers, multi-purpose frigate and a ship-supply vessels, equipped with helicopters and elite units for assignments to land on dry land.

The fact that only in 2015, which came into operation destroyer “Changsha”, the main ship of the rapidly growing Navy of China, will be in the Baltic sea to learn to hunt for submarines, and then another, and, together with the seven ships of the Russian Navy, has been summoned to the headquarters of NATO in Brussels as a surprise and dissatisfaction, including from the Nordic countries with the Baltic sea. “Now the Baltic sea turns into the North China sea,” comments, rejoicing in hard polemics, Stockholm “Kvällsposten” and thereby evokes terrible associations. After all, the South China sea with a massive presence of U.S. warships in the presence of Chinese claims to hegemony in the region is considered the most dangerous powder keg in the waters of the world ocean.

All not so is terrible, sounded before exercise from Moscow and Beijing, because both countries since 2012 annually hold joint naval exercises. However, not like now, in the middle of a European inland sea with six countries-members of NATO on the banks. When these three ships from the Russian Far East within two weeks sailed to the South-Eastern part of the Baltic sea in the British, Dutch and Danish waters, they are carefully accompanied by the relevant naval units.

The increased military and media interest into the hands of Beijing and Moscow. While China has for years promoted the goal of creating a fleet with a claim to global presence and does so increasingly, Russian President Vladimir Putin may make an attack against the hated NATO expansion right outside their doors.

Probably the same will be done and widely publicized in the media campaign “Dmitry Donskoy”, the biggest nuclear submarine in the world, from the Arctic port of Severomorsk in three thousand nautical miles to the place of these exercises. This mass of flesh, with a length of 175 meters, is not new undersea launch platform for nuclear missiles during the cold war, sailed along the coast of Norway, Sweden, Denmark. Germany, Poland and past the three Baltic countries that NATO is significantly increasing its military presence.

Local commentators believe that “Dmitry Donskoy”, officially approved, with two destroyers and together with partners from China went to such a long March to participate in the anniversary parade in St. Petersburg. “These powerful ships with their missiles remind the West that Russia will not yield to others their bastions in the Baltic sea”, — reported the state news Agency “Russia today”.

For Moscow, the benefits that China and here in opposition to the military logic of world power US own logic, and does so precisely by his presence. If the US ships run in the tens of thousands of kilometers from its shores in the South China sea and conduct exercises, says Beijing, then — why can not do ships of the Navy of the people’s liberation army, too far away from their home ports in the water, are extremely important in geopolitical terms, and as a transport route?