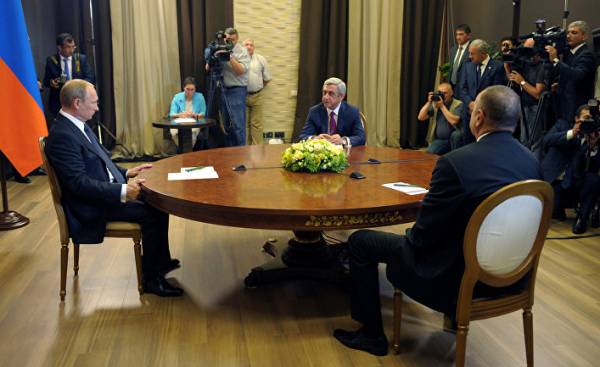 On 17 July the newspaper “Izvestia” appealed to the Nagorno-Karabakh conflict. In particular, the newspaper wrote that Russia is committed to the end of the year to organize a meeting of presidents of Armenia and Azerbaijan. Moscow became the main mediator in this matter, because the attempts of other co-chairs of the OSCE Minsk group to bring conflict parties to the negotiating table failed. About it the newspaper “Izvestia” said a senior official of the foreign Ministry.

“This only we participate. The French tried to sit down at the negotiating table with Yerevan and Baku, but of no use, to no avail. Meanwhile, the dialogue is of fundamental importance. Due to this, the region has not erupted full-scale war. However, the goals and the vision sides are still different,” said the newspaper’s source in the foreign Ministry of Russia.

In the same article, the head of the Committee for CIS, Eurasian integration and relations with compatriots of the state Duma Leonid Kalashnikov said that now the actual question of the meeting at the highest level. “It is not just necessary, but essential. No need to run on different formats and platforms to consult with countries in the 10 thousand km. The neighbors need to agree. And in this sense it is necessary to strengthen the coordination with Moscow,” — said Kalashnikov.

It is important to note that “news” is one of those Newspapers, which at the right moment to publish the necessary information to the Kremlin, citing “anonymous” sources. Consequently, the publication of the newspaper in which Moscow is presented as the only organizer of the Armenian-Azerbaijani talks, suggests that the Kremlin is again set to become the only mediator in the Karabakh conflict. This view is also confirmed by the fact that anonymous representative of the Russian foreign Ministry said the French side, as co-chair of the OSCE Minsk group, made an unsuccessful attempt to organize a meeting. France is one of the most effective members of the OSCE Minsk group, who has repeatedly made efforts to achieve progress in the peaceful settlement of the conflict. The question arises — why the Russians point out that is in France or why, for example, the Kremlin condemns the behavior of the Turkish side in the framework of the OSCE Minsk group (Turkey is also a member of this group)?

Kalashnikov, in turn, noted that the neighbors need to agree and no need to confer with the countries far from the region on 10 thousand kilometers. Apparently, the Kalashnikov, in turn, has a view of the United States. If these statements have a certain political base, Moscow no doubt has decided to postpone the settlement of the Karabakh conflict to the regional level. Another question — is Turkey in the list of neighbors or not?

Such a statement by the representative of the Russian Ministry of foreign Affairs deserves attention, considering that meeting at the negotiating table for a long time already in any way does not help to resolve the conflict. The fulfillment of agreements reached by the parties as a result of the dialogue is now more important than the dialogue.

The increase in the number of meetings of the foreign Ministers of Armenia and Azerbaijan Nalbandian and Mammadyarov does not change the situation. To achieve positive results by, first of all, should begin to perform his obligations under the cease-fire and to implement measures to strengthen trust, which were agreed last year, first in Vienna and then in St. Petersburg. Otherwise, the dialogue with frequent or rare meetings only stalling until the parties (in particular Azerbaijan) continue to arm themselves.