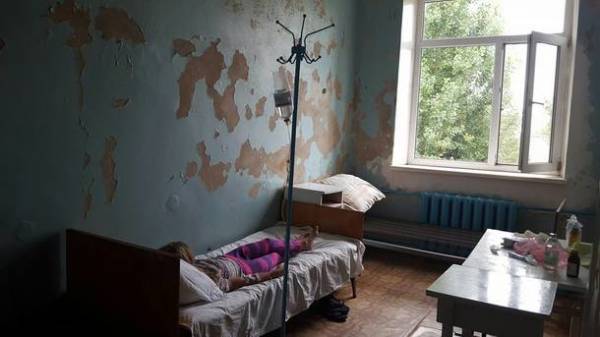 Social networks are actively discussing a post from Kiev Alina Sterakovou about the hospital in Genichesk, Kherson region. Her daughter Alice with acute tonsillitis and a temperature of 43 degrees was bad and to call “fast” refused to go. “Bring yourself, no cars. Just call again at 103 and cancel the call, and then we blame” the woman claims that she responded that way.

In the hospital the doctor had to wait in the General queue, and urgent tests done for a fee. In the end, the girl put on the hospital to the district hospital, said from Kiev.

Peeling blue paint on the walls and carelessly smeared with plaster cracks that saw the mother and daughter. The ceiling is blackened by the fungus, sometimes he has fallen plaster. In the ward of infectious Department of the hospital in Genichesk also stood two Soviet bed with tubular grid, rickety from time dresser and two desks. Hanger with a bottle of mineral water served instead of a holder for the dropper.

“New location for filming horror” – modestly described the place Alina Smerekova. – “We were told that this is the VIP conditions. Here on the first floor – there is actually a horror.”

The website “Today” tried to call in Henichesk Central hospital. In the waiting room of the doctor repeatedly said, “no Doctor. Please call later.” And in the regional state administration, Deputy Director of the Department of health, after hearing about the interest in Henichesk the hospital, hung up.

But the news Agency “Kherson” in the health Department of Kherson regional state administration stated that checked the failure of the ambulance from the call.

“This day was a call to an ambulance on the Arabatsky arrow to the sick child at 06.06 hours. An emergency ambulance from the city came to the patient at 06.19 hours and brought her in heniches’ka Central district hospital in 06.53 with a diagnosis of alimentary gastritis”, – writes the website “Kherson”.

But the chief doctor of the hospital Eldar Fetiev explained that the girl was put in this chamber because the girl needed help as quickly as possible. The house itself, he said, usually not used for admission.

“Given the serious condition of the patient and fearing for her health, it was decided to grant her emergency medical care. Unfortunately, the holiday season Genichesk hospital are crowded with patients, mainly vacationers. Child, only for the procedure, put in caretaker to repair the house, which is not used for admission. Because the disease is infectious in nature, for the patient found in a separate room. All other chambers are normal conditions for the patients. Stated the house is a short queue for repair. We regret this situation. The child should not be uncomfortable in the house. But the actions were conducted quickly and without delay,” apologized the doctor.

Note, in Ukraine, the reform will create a hospital district. As a result, in a radius of 100 km will remain one or two hospitals of intensive treatment. The rest of the hospital pereprofilirovanie. At the main hospital, the Ministry of health will allocate money for the reconstruction and purchase of new equipment.