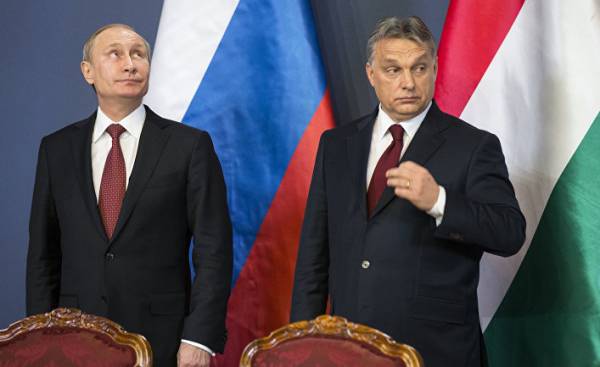 He and many of his compatriots see more and more signs of the growing influence of Putin’s regime in Hungary.

“We used a child’s orange paint. It is easy to remove, you need only lightly rubbed. We conducted a live broadcast to Facebook and then waited for the police to come”.

In the life of reggae musician George Komaromi more known under the artistic alias G Ras. This man with a rare Rasta-man beard and pigtails below the belt — a little over thirty.

He is also a political activist who fights for nature, veganism and anti-oppression of any kind. When he is not on the streets or in the clubs, it devotes a lot of time a variety of nonviolent actions, which are often broadcast live on the Internet. He is highly critical of Prime Minister Viktor Orban and his national-conservative government.

To end up in jail or pay a fine — the usual case for G Ras. But not the threat to his life.

Now he tells us about the campaign, which was held after Easter, April 17, with a friend. It was directed against the monument in Freedom Square in Budapest, obelisk, erected after the Second world war to commemorate the city’s liberation by the red army.

“Honor and praise to liberators, it says. Yes, although they have then occupied for 40 years,” says George.

He and many of his countrymen worried due to the fact that Hungary Orban is increasingly reminiscent of Vladimir Putin’s Russia.

In the Russian Republic of Chechnya, ruled by the autocratic Ramzan Kadyrov. 40-year-old leader inherited power from his father, warlord Akhmad Kadyrov, who in 2004 was killed by the Islamists, and he uses it unlimitedly, in exchange for absolute loyalty to President Putin.

Known opponents of Kadyrov have been killed in Moscow, Istanbul, Dubai and Vienna. In Russia some believe that the Chechen regime was behind the murder of journalist Anna Politkovskaya in 2006. But in recent times, many people were outraged by the information that in the Republic of tortured gay men.

A method that is often used by the regime of Kadyrov, a forced public apology. It serves two purposes: the “culprit” violated, when “apologize” appeared on TV or the Internet, and demonstrations in addition intimidates others who had the intention to oppose the government.

One such example is Ramazan Jamaldinov, the man who last year asked Putin in a video in which he complained about conditions in his native Chechen village. Among other things it was stated that teachers do not get paid.

Zalaldinov house was set on fire, and he acted on the Chechen television apology personally to Ramzan Kadyrov. “It was a mistake, I am ashamed,” said the terrified man.

For the action on the Freedom Square Here Komaromi and his friend was sentenced to a fine in the amount corresponding to thousand Swedish kronor. About it they counted.

At the same time Amateur shooting of the action remained in the Internet and spread quickly. Overall, the protest succeeded, found G Ras. But then he received a message from a user with English name.

“I immediately realized that this is Russian. He threatened me. He said that many Russians here in Budapest, angry and looking for me. People want to torture me and kill me and my family. But he said that can stop assuming that I ask for forgiveness”.

The man who demanded an apology was really from Russia. He said that his name was Magomed Dashaev, he’s 34, and he is a businessman, originally from the Chechen capital of Grozny.

G Ras claims that all thinks well and does not want to judge someone in advance. He agreed to meet and record the apology “as the perfect example of how to solve problems together.”

But he did not know that Dasaev a few days before, wrote in a closed group for Russians in Budapest in Facebook. In the discussion, in which participated also the employee of the Embassy, said that “eggs remove” to those who offend Russia.

“This bastard has not got it in the face of us, Russian. I’ll teach him a lesson.”

Three days later, after the rally on Freedom Square Komaromi and Dasaev met in a cafe with a view of the monument. An unknown Russian woman recorded a video where Dasaev in Russian says that he spent “explanatory conversation” with those who desecrated the monument, and that he agreed “to apologize to everyone who was offended”.

He then gave the floor Here Komaromi who asked an apology, first in English, then in Hungarian.

“I’m probably naive, I thought that the idea was to send this video to everyone who felt insulted. But the next day it was uploaded to Youtube and it went viral. There was a lot of threatening comments from Russian, — he says. — I felt deceived and humiliated. So you can’t criticize their own government without that you have not found the Russians with their threats. That is how the mafia”.

Ten years ago Viktor Orban was criticized by other European leaders, calling them “henchmen of Putin” and reminding of the Soviet-Russian aggression against Hungary during the uprising in 1956. But when Orban in 2010, came to power, he immediately changed the hurdy-gurdy. Now he is the best European friend of Putin after the annexation of Crimea in 2014, met with the Russian President more often than any other European leader.

Economically Hungary moving closer to Russia, including as a result of the construction of a nuclear power station “Paks”, which connects the country’s electricity with Moscow until the year 2085. In addition, the construction itself is carried out with the help of the Russian loan of 10 billion euros.

Many government bills in recent times more or less copied from the Russian sample, for example, a law that compels organizations funded from abroad to register as “foreign agents.”

And instead to demolish Soviet monuments — as is usually done in the former Soviet republics — Hungary orders to build new. Before Putin’s visit to Budapest in February on the banks of the Danube was the opening of the monument in the form of an angel five-meter height in memory of the soldiers of the red army who died on these shores.

Many Hungarians are concerned about this development, in which their country is more like the “Trojan horse” that Putin uses to split the EU. During several demonstrations against Orban, which took place in Budapest this spring, like an echo of 1956, repeated the cries of “Russians go home!”

At the same time, analysts note that Moscow is using Hungary as a focal point for their agents. Last autumn it became known that Russian diplomats were involved in the training of the Hungarian neo-Nazi group.

Embassy in Budapest is unusually large, and former Prime Minister Ferenc Gyurcsany (Ferenc Gyurcsány) claims that there are up to 800 Russian agents. In seven years, none of them were expelled.

Journalist Nyilas Gergely (Gergely Nyilas) on the website of the Index studied the case of threats against George Komaromi and considers them a sign, inspiring concern.

“This testifies to growing here the influence of Russia. They want to demonstrate its presence in Hungary and to show that to go against Russian interests dangerous.”

Dagens Nyheter: is there such a figure as Mohammed Dasaev, on the orders of Moscow?

Gergely Nyilas: We were able to show that he has connections with the Embassy. If he gave someone a job, we don’t know. But, in any case, this video could be placed to his credit in the future.

When the “apology video” is known, neither the police nor other Hungarian authorities did nothing. Only a week later, something happened: when Orban drew attention to the incident.

“He apparently came finally to the head, what’s a migrant, and even Muslim, threatened Hungarian citizen,” says George Komaromi.

Now Dasaev became a figure of the preliminary investigation. DN tried to contact him but to no avail. The last time Ras G received from him the news after the statements of Orban.

“I said that he is wanted by the police, and offered to meet again and record a new video, this time having traded roles that he explained his behavior and asked for an apology. His answer was short: no. Since then, I haven’t heard from him”.

Since 2010 Hungary is ruled by Prime Minister Viktor Orban and his national conservative Fidesz party (Fidesz).

In the 2010 elections, Fidesz scored 53% of the vote that gave the party two thirds of the seats in Parliament and the opportunity to change the Constitution of Hungary. The share of their representatives fell after the 2014 elections, but the party still in the majority.

Orban criticized, including the EU, for what many regard as anti-democratic reforms. They include in particular measures to reduce the independence of the judiciary and the Central Bank, as well as restrict freedom of the press.

In may, the EU started a process that could lead to the fact that Hungary will lose the right to vote in the Union.

From my critical position, which he held while in opposition, orbán came to the fact that in the EU it is now considered the best friend of Putin. He believes that the EU sanctions against Russia are “ineffective,” and regularly meets with Putin after the annexation of Crimea.

The largest opposition party in Hungary, right-wing extremist “Jobbik” also changed its critical attitude towards Moscow’s position and moved closer to the Kremlin.