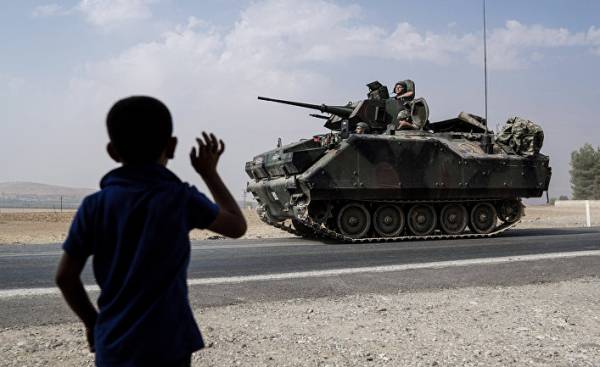 It is assumed that the operations of the Turkish armed forces against the terrorists of the Party “Democratic Union” (PYD), a branch of the Kurdistan workers party (PKK), in the Afrin in the coming days will increase. After the talks held between President Erdogan and the Minister of defence of Russia Sergey Shoigu, Russian media even gave the name of this operation. It is alleged that the operation called “Sword of the Euphrates” will put an end to the presence of the PYD in Afrin. After all these events, Moscow issued an ultimatum PYD: “Leave Afrin”.

The Value Of Afrin

Afrin is a district of Aleppo (meaning the province of Aleppo — approx. ed.). This is an important point in the system devices of the terrorist organization the PKK — PYD in Northern Syria. It borders Turkey and is located in the West of the line Azaz — Jerablus, which of the Turkish armed forces released as a result of operation “shield of the Euphrates”. Line Azaz — Turkey Jerablus cleared from ISIS terrorists (banned in Russia — approx. ed.), and PYD. Otherwise, a terrorist organization PYD, taking the corridor Azaz — Jerablus under control, would connect the district of Kobani, which is located to the East of this corridor, and the area of Qamishli in the continuation of this line with the Afrin in the West.

A heavy blow to the terrorist organization PYD

This was the project of a terrorist organization PYD and the higher mind that directs it. The result of the operation “shield of the Euphrates”, launched 24 August 2016, Turkey guaranteed the security line Azaz — Jerablus, located between the Afrin and Kobani, namely the two areas occupied by the PYD. Now came the turn to release Afrin, the continuation of this corridor, from the occupation of the PYD.

It is alleged that the operation in respect of Afrin, which is now the Turkey is on the opposite side of the border with the use of howitzers, become larger, and as a result, the Afrin will be cleared from terrorists PYD. Amid all these events from Moscow was followed by an important call for the terrorist organization, the PYD. An unnamed high-ranking Russian official said that Russia has put forward an ultimatum to the PYD: “Free Afrin, leave the city, because we will not object to Turkey’s interference in Afrin”. In other words, from the point of view of Russia, PYD or she will leave the Afrin, or Turkey enters the army and expel the terrorists.

Erdogan has warned Putin about Afrin

Before the operation in raqqa in the media leaked the photos, which the Russian military was depicted with terrorists PYD in Afrin. In early may, President Erdogan showed these pictures to Russian President Putin, the Russian leader said that everything necessary will be done.

Russia’s relations with the PYD in Afrin

Russia has always supported contacts with the PYD. After the destruction of the Russian plane in November 2015, Russia used the map of Turkey against the PYD, PYD helped with weapons and even allowed them to open an office in Moscow. But it is flirting PYD terrorists from Russia did not remain without attention of the United States. Russia has never denied its relationship with the PYD, but it is not allowed that these relations were developing in a way that could harm relations between Turkey and Russia. In other words, we can say that Russian relations with the PYD is not as profound as the Union of the United States — PYD. At least Russia, when it comes to Turkey, behave more honestly and puts Turkey on a par with a terrorist organization. For US, unfortunately, it is not the case. USA in the period of Obama, and trump showed the determination to continue the Alliance with the PYD at any cost. In some situations, you can see that between the US and Russia PYD is also in this sense is a source of tension.

Protests against the YPG in the North of Aleppo. The people called for the release of the territory from the control of the YPG.

Russia says PYD: “Go away from Afrin”. Says that Turkey will conduct an operation against this city, and stressed that it would not oppose such an operation. The Russians will not interfere with Turkey. Well, what happens after the Afrin will be cleared of PYD? The first stage will cut off the connection PYD with tel-Rifat and Managem to the West of Raqqa. Dream of a terrorist organization PYD about connecting cantons in Northern Syria will come to an end, and their promotion in the region will be completed. However, the release of Afrin following the example of the corridor Azaz — Jerablus — also on the agenda. A calculation of the Afrin, possibly associated with the transfer of this cleared of terrorists in the region under the control of regime forces.