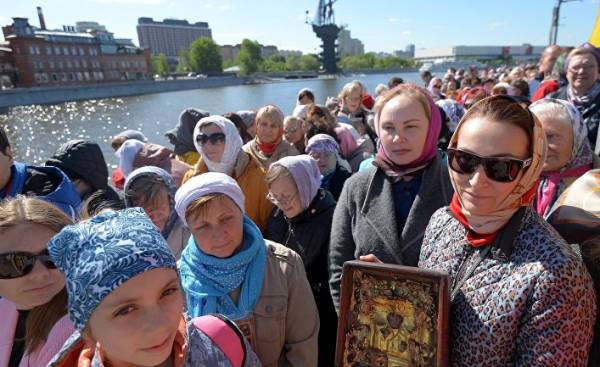 Separated by a fence lined up along the Bank of the Moskva river towards the Cathedral of Christ the Savior.

In the queue length of three kilometers, each patiently waiting for when it will come to the relics of Nicholas the Wonderworker. They say that he grants wishes.

Muscovite Luba Turkina says that requests to help his seriously ill mother. She for the first time drawn to the relics.

Pensioner Nina, Galina V. and T. N. came to the capital from the Moscow region. They already have the experience of pilgrimage. They ask for the health of yourself and your family and peace on Earth.

“I ask only good, but still — that the Americans and others behind us,” adds Tatiana.

Two hours later, pensioners are still very far away. Despite the scorching sun, they say, can survive for many hours.

The patron Saint of travelers and the prototype of Santa Claus

St. Nicholas is one of the most popular saints in the Catholic and in the Orthodox Church.

He is considered the patron Saint of wandering by land and by sea. It is believed that he is especially protective of children. He is also the prototype of the modern Santa Claus.

On 21 may, the relics of St. Nicholas were first brought to Russia. Part of the body of the Saint, brought from the Italian city of Bari, sparked a wave of interest among Russians. © RIA Novosti, Grigory Sysoev | go to photobacteria believers the Holy relics of St. Nicholas in the Cathedral of Christ the Savior

On Internet pages, brought to Moscow the relics of St. Nicholas, carefully monitored the number of pilgrims. At the end of June at the relics was visited by more than 1.2 million people.

In late July, the power needs to be transported to Saint Petersburg. Then they will be returned to Italy.

Waiting in line can last 14 hours

The majority of the pilgrims are elderly women. There are men and entire families.

The longest queue was eight kilometres away. Then we had to stand for 14 hours.

After six hours of waiting Muscovite Sergey Zinoviev have come to the corner of the Temple of Christ the Savior. The patient man waiting in line was difficult. However, the approach of the important points gives him courage.

“I ask for health for myself and family and stability in Russia. We need not worry, and stability, even if this will mean a heavier material existence”, — says Sergey Zinoviev.

Pilgrims to the Temple passed through the metal detectors. Inside the promotion of the queue is controlled by the assistants.

Waiting for a few seconds

Pilgrims to the relics of your give instructions to the flow of people is not violated.

To cross it is necessary to have in advance. You need to quickly touch his lips to cancer and at once to go further.

Before the relics of the queue is divided, because the cancer attached on both sides. At the Shrine at any given time four.

The hours of waiting ends with the singing of the choir moment, lasting only a few seconds. On the faces leaving the temple — a peaceful smile.