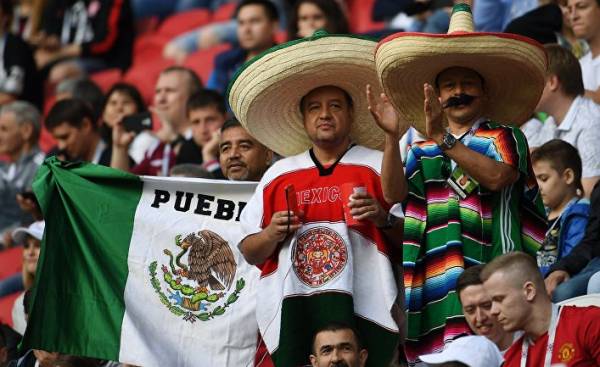 Street demonstrations, which were held in Russia shortly before the start of the confederations Cup and was pretty severely depressed, is not repeated in the period of the tournament, which FIFA organises on the eve of the world Cup. The organizers of the competitions in the four host cities (Moscow, Saint-Petersburg, Kazan and Sochi) can be satisfied with the results of their work.

Guests of the Cup taken away from Russia a sense that the 21st world championship should pass successfully. This is precisely the impression the Kremlin wanted to make on everyone who is no stranger to the world of football. In the course of the competition was resolved many organizational issues, although the confederations Cup, which ended on Sunday, its significance can hardly be compared with the forthcoming world championship, if we talk about the number of participating teams and quality of football.

So far, Russia, Brazil and Iran are the only teams that guaranteed their place in the FIFA world Cup 2018. It is expected that by the end of the next round of qualifiers, which will be held in August, this list will be added. In the world Cup will bring together 32 teams. In a year Russia will be in the centre of sports events.

The confederations Cup showed that Russian security is serious business. As a result of regional and border conflicts, as Russia is under the gun from terrorists. The Kremlin has to all the time to be alert. Subway stations in Moscow and St. Petersburg, passengers with backpacks are required to pass through metal detectors, and then subjected to additional inspection. The crowded places are heavily guarded. The same verification system used in hotels, accredited by FIFA.

In the stadiums the inspection is carried out continuously, without interruption or exception. All according to Russian standards. Special teams were subjected to thorough checking everything that moved through the front door. Turnstiles, similar to those that once spun at railway stations in Brazil, to regulate the flow of fans. Through them it was possible only by tickets or special passes. To get in on forged tickets was impossible. To the stadium it was forbidden to carry any food and drinks.

Cell phones and computers also had to be tested. Interesting detail: they had to enable in the presence of the police.

Security at the stadiums in Kazan, Moscow and Sochi was not considered with the schedule and continued the same thorough inspection in respect of late fans. To avoid the risk to miss part of the game was coming to the stadium in advance. To focus on the stadium the fans helped local workers.

All spectators had to have a passport fan. Only if available ticket is considered valid. The passport can be obtained in centers of Fan ID or in the respective places of issue in the host cities. This innovation helps the police to identify all the fans. The main concern of the football hooligans, who in this tournament does not show.

The head coach of the Brazilian national team Titus and team Director edu Gaspar had to undergo the same procedures. Even if you’re a big deal with Russia this will not work. For the matches of the semifinals and finals Titus and ed did the photos, as well as of the passport of the fans.

The police provided security to the stadium adjacent territories, avoiding them with dogs. The animals were wearing muzzles. Especially a lot of cops was observed in Moscow. In other cities — slightly less.

It seemed that was kept under control everything, even the unbridled joy of Chileans recognized the noisiest fans of the tournament. For the world Cup in Russia until the finals were about 12 thousand immigrants from the Latin American country.

Four of the stadiums which hosted the matches of the confederations Cup, meet all the necessary requirements. They have good ventilation, a convenient location and spacious corridors. They are fully prepared for the championship. Others are under construction, which takes place at an accelerated rate, and, as promised, the organizing Committee, will be completed by March. In the cafeteria you could buy the most simple food: sandwiches, popcorn, soft drinks and water. The queue in between is inevitable.

Stadiums only accepts Visa credit cards. Payment is made in rubles, the Russian currency. Toilets — clean and spacious but crowded and a rather long queue also it was impossible to avoid. Not enough paper napkins for hands.

Good visibility is provided to the audience of any sector. Closest to the field — the stands of the stadium “Spartak” in Moscow. The ball often falls straight into the hands of fans. The screens to watch the game and for time. However, in the course of the tournament will not broadcast the highlights of the meeting, and especially those cases when it was necessary to resort to “videoarray”. In these cases, the fan did not understand what was happening.

In March next year, FIFA will make a final decision about using this device for the championship. Meantime, she intends to continue testing the system for official tournaments and organize special evaluation group.

The city chosen to host the confederations Cup, also tested transport possibilities. To travel in Russia by public transport such as metro and taxi, and Uber was pretty simple. No hitches at the airport was not observed. There were always professionals ready to help people not to miss the flight. Some did it with great patience and tact, others with less.

A serious drawback was the language. In the course of the tournament it became clear that not many Russians can freely communicate in other languages, even in English. Difficulties were experienced and the volunteers — mostly young people — on behalf of the organizing Committee was to provide basic information to fans at the special information kiosks on the streets and in the stadiums. This area of work is still to improve by the beginning of the world Cup.