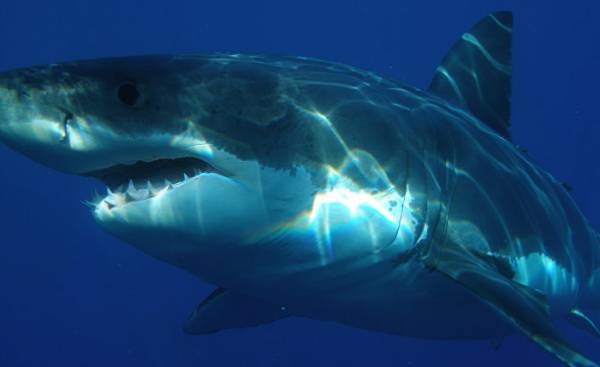 You’re in the water, swim and enjoy. Around the dark expanse of the sea, it seems that the bottom of the sea, which you don’t see infinitely far below. You might even draw little legs from fear: who knows what could be down there. You can’t see anything, but maybe someone sees you?

300 teeth, sharp as a razor blade, floating towards you with a speed of 50 kilometers per hour. Fearful white shark for many, a symbol of the worst that there is in the sea.

Many of us experienced in the water similar feelings. But then you remember that you are in four meters from the shore, in the Oslo fjord, and the fear of man-eating shark, which you really can not see, slowly passes.

But is it really so unbelievable that a white shark may appear in little Norway?

“No. It goes to the fact that the white shark in Norway will appear,” says shark expert Muren Fredrik (Fredrik Myhren), which does not exclude that the big fish might get away in the country.

Muren — adviser of the marine environment WWF Verdens Naturfond (world wildlife Fund) in addition, the head of the organization “Help the sea to the sharks”. At the time of this writing, Murin dives in the sea near Jæren (Jæren) (region in the South-West of Norway — approx. ed.), where he dives with dogfish prickly shark.

Although many have heard that as white shark and can appear in the seas of Norway, as the sea temperature rises, this is not the whole story. Despite the fact that the sharks will certainly be even better if the water temperature rises even a few degrees, nothing that would indicate that they may not be good in Norway now.

“White shark have in its body a special body, which gives it the heat. That is, her body temperature can be held at a higher level than the temperature of the ocean around. The white shark was seen even in the far North in Alaska,” explains Moren.

In addition, the temperature rise of water in the ocean has led to the fact that some of the types from the menu white shark headed North, in Norwegian waters. This applies to mackerel, horse mackerel and tuna. In Norway also large colonies of seals, which the white shark is also a very good choice.

“The young sharks often prey on mackerel, Jack mackerel and small tuna. And this means that in Norway they, too, have something to eat. There is nothing that would indicate that the white shark are not like that. In addition, it is possible that the white shark has already visited Norway,” he says. But adds that while white shark no one in the country has never seen.

When You say “small species of white sharks,” what do You mean?

From a half to three meters. In fact, in relation to our human scale, there is nothing that could be called “little white shark” — says Muren.

Reports that a white shark was seen in Norwegian waters, there have been a few times. Often in connection with underwater work platforms in the North sea. But, according to Muren has always proved that it is the Atlantic porbeagle. In the same way as the white shark, it belongs to the family of the porbeagle, and the layman they may seem quite similar. But Atlantic porbeagle danger to humans is not.

In other cases, as it turned out, it was about a giant shark. It is the second largest fish in the world, and its dorsal fin resembles the dorsal fin of a white shark.

Muren several years dives near Jæren, and even filmed a video on your dives when he is surrounded by hundreds of catamarans.

Chances of getting hit by lightning — more

In 2016 in the world in total were registered 81 cases of sharks ‘ attacks. Four cases were fatal. In other words, to panic a little, said muret. It is important for him to declare that even large specimens of white sharks have absolutely no desire to get in the menu man, and such a small number of shark attacks on humans is emphasized.

One of the killing machine that inspires the greatest fear is an animal that most of us know. This is the man. About 475 thousand people are killed by other people every year due to wars, terrorist attacks, murders and conflicts. Well, you are now a little less afraid of white shark and begin cautiously to look at the office mate?

“Think about how many billion people are at sea at any given time during the year, and only four are killed by sharks. You are more likely that you twice hit by lightning. Humans are slow, they are ill-suited to stay in the ocean compared to animals that prefer to eat sharks. White sharks have enough energy to eat people, but we have too thin a layer of fat and simply not the taste that she likes,” he says.

Muren believes that there is more reason to fear the Pacific oyster, introduced in Norway in recent years.

In contrast to flat oysters, which were more common in our waters, the Pacific oyster has such a structure that the attack on it is dangerous: it is very sharp, you can hurt yourself. So Muren believes that Norwegian swimmers should pay attention to the fact that they can step at low tide, and not to be afraid of sharks.

Group of animals, who headed the food chain before the time of the dinosaurs and that — and this no doubt can end human life in the blink of an eye, will always cause us to have fear. But if white sharks do so few fatal shark attacks on humans every year, why do these sharks have such a bad reputation?

Muren believes, in particular, that the cause may be the movie “Jaws” (Jaws). The film appeared in 1975, it is based on the novel “Jaws” by Peter Benchley,. A novel based on the history that actually occurred in 1916, when one or more sharks attacked people: just 12 days in new Jersey carried out five different attacks.

“Thanks to the film the fear that must be felt by the inhabitants of those places at that time, spread to other people, although this is, of course, had no basis in fact. Before white shark or other shark species people not really care, but after “Jaws,” every shark attack has attracted a lot of attention in the media,” says Muren.

For many the only good shark was a dead shark. Many species of sharks started the hunt, to the extent that some of them were on the Grand disappearance, having existed in the ocean more than 400 million years.

“I always say that the only danger connected with shark is that the ocean annually loses very many of them. Sharks are the group of animals in the ocean, which is most endangered due to overexploitation of fish. “Cute” facing a threat such as a tiger or elephant — help many, but few helps to the sharks”.

Although in reality the shark is extremely important for the life in the ocean. She, in particular, is necessary in order to curb the growth in the number of large fish in the coral reef areas. Without sharks there would be more large fish, which, in turn, would eat more small fish, but they do not give too harmful algae grow on reef corals.

“This led to the fact that many coral reefs are sometimes simply overgrown with algae. When algae is too close a large area of coral, they can die. A dead reef means little fish and other animals. In some areas failed to return to the sharks after the event of overfishing,” explains Moren.

“This has led to the restoration of the balance between fish and coral reefs, and life on the coral reefs bloomed again,” he continues.

As the ocean temperature in the North is growing, it turns out that Norway can live a number of exotic species. In particular, in the Oslo fjord often see the common moon fish. It is the heaviest bony fish in the world.

It is unknown whether she winters in Norway, but in summer time she was here well. And — anticipating the question you’re asking: no, it is not dangerous to humans.

In Norway saw more and swordfish. This species occurs in many parts of the world, but in the warmer waters. It is also not dangerous to humans, and sword fish uses only for hunting other fish. Swordfish swims very fast and is known for the fact that if you caught her on the hook without a fight she will not give up.

In recent years, the emergence of the “fish of St. Peter” has become commonplace in Western Norway. Tuna, which wiped out almost by the roots, returned in many places. In the Oslo fjord back longitudinally striped pelamida, and the North-Western part of the Atlantic ocean in Norway moved snow crab.

According to Muren, it is possible that in the future we often visit and exotic jellyfish. For example, such as “discomedusae” or “Pelagia nochesvetka”, which Muren and he had seen several times when diving in southern Norway.

This jellyfish, in particular, fell in love with Mallorca and even encouraged to observe extreme caution when it appears. If you are not lucky enough, and you’ll have the honour to know her better, you can count on the fact that you will experience the same burning sensation, and in contact with the usual red jellyfish, but the pain will be much stronger. After meeting with the “Pelagia” can even happen cramps.

Still oysters to life honey did not seem

Senior researcher Ali Rende (Eli Rinde) from the Norwegian Institute for water research studied some of the new species appeared off the coast of Norway after the water in the ocean became warmer. In particular, the Pacific oyster.

Pacific oysters were imported to Norway in 1980-ies. Then it seemed unthinkable that they can spread here, because for spawning they need warm water. However, this is undergoing a demographic explosion, in many places, there are lots of Pacific oysters.

“The Pacific oyster may lead to the formation of extremely sharp reefs. If she in large quantities will flood our shores, it will be necessary to go very carefully, because to step on it hurt, plus it may displace other species such as mussels, for example,” explains Rindi.

— What are the prospects for the spread of Pacific oysters in the coming years?

If ocean temperatures continue to rise, it can spread just as quickly. It can absolutely change the beaches on the coast — everywhere will be sharp oysters. And will lead to consequences for other species. We must be ready for a big change in the future, says Rinde.

Among other unfamiliar species reached Norway, there are Japanese Ghost crab, and the Japanese Sargasso weed. The latter is in Norway for several years. But as the temperature rises, no one knows how they will be distributed in the future. In the future they too can oust other species.