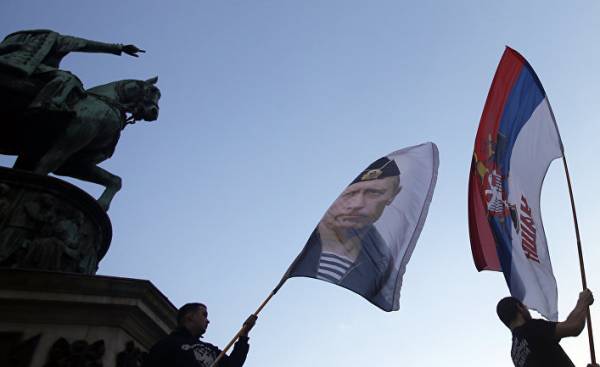 I will begin immediately with the conclusion that in the coming years, Russian influence in Serbia is reduced. Whether it will continue to grow will depend on several factors. The EU needs to accept that and find a way to operate in the new circumstances. The correct thing would be to reach strategic agreements with Russia. In the geopolitical context of the goal of Europe is not contrary to the purposes of Russia in both the Balkans and the middle East, the Sahara-Sahel region and Central Asia. In Brussels must realize this as soon as possible. Otherwise, the EU will be only two options. The first option is to allow the growth of instability in South-Eastern Europe. The EU is working with the elites and among the General public, his popularity is declining. The example of the Soviet Union does not allow us to forget what ends this protracted process. The second option implies that the EU will be fully ejected from the game and not be able to influence the fate of the Balkans. If this will be the new US position, then Brussels would be in a very difficult position.

Of course, such extreme cases, we would not say, if we analyzed the influence of the Serbian-Russian relations on the European integration of Serbia, but talking about the impact that the process of European integration Serbia has a Serbian-Russian relations. Why I put the question? Since 2008, Serbia is firmly on the “eurotelco” — so much so that one slogan (“we Have no alternative to Europe!”) the country even included in its foreign policy doctrine. However, at the same time, in parallel with the intensification of our European integration, deepening and expanding of the Serbian-Russian cooperation. This is happening at a pace that can only be compared with one period of the history of the First Serbian uprising. To some it may seem paradoxical, but the facts are that the more Serbia focuses on EU, the more Russia’s presence in Serbia. Even recently, Sigmar Gabriel, in a very emotional speech said, “I don’t understand why, for instance, on the way from the airport to the centre of Belgrade welcomes all large shield with the inscription on the Russian-Serbian friendship, and yellow and blue in Europe is absolutely not visible”.

Why should we love the sponsors of Kosovo’s independence?

The answer to this question must be sought on three levels: a narrowly national, which covers the state of Serbia and Serbian ethnic space, wide regional, which encompasses Europe as a continent and to the broadest international.

First, with regard to the narrow context, I must say that since 2008, the European Union manages the process of creating a second Albanian state in the Balkans, and in 2012 the EU also coordinates the process by which quasi-governmental entity called the Republic of Kosovo will be legalized at the international level. More precisely, this process should be completed by the introduction of the so-called Kosovo in the UN. Hence the problem with the spread of EU influence on the Serbian public opinion. Until the unilateral step of Albanians in our public establishment there was a clear border between NATO and the EU. The Alliance has committed aggression against our country, and the EU was a peace project through integration with which we could find solutions to our problems and enhance well-being. In that moment, when the EU became a sponsor of the Albanian independence, he became identified with the NATO. And now, hardly anything can change even in the long term. No new political decisions based on common to all post-Yugoslav countries the principles, we should not expect that the impact of the EU on the public will grow. The principle of the Badinter had to do the political basis for creating the relatively safe Balkans. However, in 2008, the EU changed this principle and now need to look for new solutions. To Badinter, we can’t go back.

Speaking of regional continental conditions, it is necessary to note that since 2008, the outbreak of the global economic crisis, European integration began to lose its appeal. This is a General trend that in some societies, evident, and others less visible. But it is everywhere. For a decade we listened to the talks on European integration and explanation of what wealth it will bring us, how to improve our lives and help to rebuild the state. There was a grain of truth, but it is becoming less and less, so that such theses are harder to argue. Therefore, we often reflect on the alternatives. Especially when we see that today European countries are faced with numerous challenges and threats that ten years ago simply did not exist.

Example — migration crisis and senseless war in Ukraine. The idealistic theory tried to put in the center of international relations concepts such as freedom, development, human rights and peace. But current events prove to us that the right-wing realists, who consider the Central concept of safety. Such crises raise the question about threats and security. European peoples and States are increasingly thinking about how to protect yourself against new threats at any cost. In this respect, European integration is no longer a unique solution and more like a dilemma. And this changes things.

In the end, in terms of international context, I note that, given the many indicators of military, economic and political power of the key actors in international relations, it is possible with high probability to state: we are witnessing a transformation of the structure of the world political system. The world is no longer unipolar, and Western centers of power have lost their monopoly in world politics. How else to interpret all the growing determination of the Eastern European countries to cooperate closely with China? Importance in Eastern European politics is growing. However the EU has no impact on East Asian politics, or, at least, this effect is limited to finding solutions to North Korean issues and initiatives of Germany and France (until recently still the UK as part of the EU) in the UN security Council.

As a result, the last eight years in the Balkans is constantly decreasing the impact of key Western countries and of course, the growing influence of other players. Therefore, the problem of the European Union in the Balkans are structural and systemic in nature. And it will continue. Without political decisions, as history shows, these trends are irreversible. Talking about political decisions that affect our region and our security in him, and which, as became clear, no longer can be based on imposed Western-Balkan construct. It is also about the decisions that are important for the further fate of the EU and its position in the international arena.

To support my thesis in the end I will add an example from Bosnia and Herzegovina. Among the Muslims there are subject to the influence of Turkey. According to the survey, the Sarajevo of the analytical center “Populari” in 2014, 72.5 percent of Muslims in Bosnia and Herzegovina from all countries of the world most sympathetic to Turkey. But Serbia has invested in the big six times more than Turkey, the volume of trade exchange between Sarajevo and Belgrade, in six more than with Ankara. The Turks themselves twice invested more in Serbia than in Bosnia and Herzegovina, and almost all Turkish immigrants are the EU, USA or Canada. So that Serbia and Serbs are not exceptional. Of the changing environment in which we live, and the correlation of forces in international politics impose a lasting mark on our public consciousness and, as a consequence, on political orientation. Therefore, given past events, “Berlin plus” and “new Marshall plan”, some indigenous twists should not wait.

The situation does not change, while in Brussels you do not select a new policy and are not given clear strategic guidelines for the new organization of the European Union and to maintain its role in world politics.