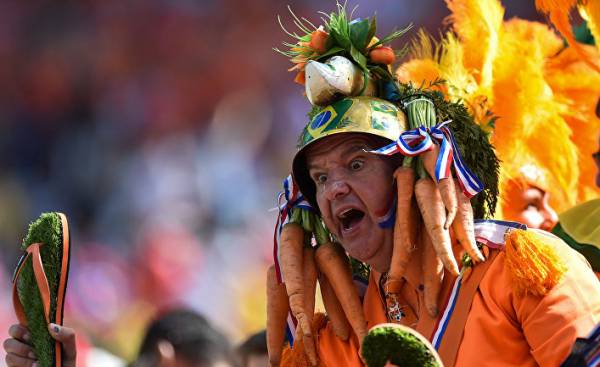 In the US, many don’t know what is in their food or where are raw foods. The same tendency is traced and in Denmark. Although not to the same degree.

A couple of years ago, British chef Jamie Oliver (Jamie Oliver) went to the USA with the TV show “Food revolution Jamie Oliver” (Jamie Oliver’s Food Revolution). His goal was to improve the food in American schools. In one of the shows he attends preschool preparatory classes and tests how well they know each other with fresh vegetables.

Jamie Oliver picks up a sprig of tomatoes and shows her class. “Who can tell me what it is?” — he asks.

All freeze. Finally, one brave boy raises his hand.

None of his classmates make more informed assumptions.

When Jamie Oliver asks if they know about the tomato ketchup, all the students immediately raise their hands. To the great frustration of chefs.

Many American adults, like preschoolers, there are problems with understanding what is in their food and where are the raw foods. This is evidenced by a new survey commissioned by the innovation Center in the field of production of dairy products of the United States, which was attended by about one thousand respondents, writes the American magazine Food & Wine.

The survey showed that 7% of American adults believe that chocolate milk came from brown cows give in contrast to whites. So said the 16.4 million inhabitants of the United States.

In the early 1990s, the Department of agriculture conducted a similar study which showed that almost one in five Americans doesn’t know that patties for hamburgers are made from beef.

Since statistics are not too improved. In the framework of the local research project, a group of scientists and educators visited one elementary school in California. There are 50% of the students did not know that pickles can consist of cucumbers. And almost every third student had no idea that cheese is made from milk.

Organization FoodCorps is working as Jamie Oliver, to improve nutrition in American schools and to enhance the knowledge of students about raw food. One of the female organizers of FoodCorps, Upton, Cecilia (Cecily Upton) told The Washington Post:

“Now we are accustomed to the fact that if we need food we just go to the supermarket. In our educational programs do not include the requirement to teach children the origin of food and where it was before I got to the store.”

We have in Denmark, the statistics look a little better. The study, conducted by Madkulturen (“food Culture”), under the Ministry of the environment and food last year, almost every second Dane responded that “it is important to know where there are raw food”. And almost every third Dane buys products locally produced food at least once a week.

But. Among Danish children and young people is the trend.

Their knowledge about the origin of raw food are becoming poorer and poorer. This is evidenced by Judit Cysts (Jydith Kyst), Director Madkulturen.

“We’re not at that stage, as the United States, where, for example, in new York began to build the apartments without a kitchen, because people don’t cook the food themselves. But this trend is. Especially young people now believes that a full-fledged home-cooked food, for example, the pizza base from Netto with some filling, and still we hear questions from kids who are interested, I do not grow carrots in the trees,” she says.

The newspaper Berlingske asked Judith Cysts, does a substantial part of the Danes, like Americans, chocolate milk flows from the udder of brown cows. Here is what she said:

“I think not. The Danes were much more ignorant in this sense, but now a number of initiatives that will help us not come to the same situation that in the United States.”