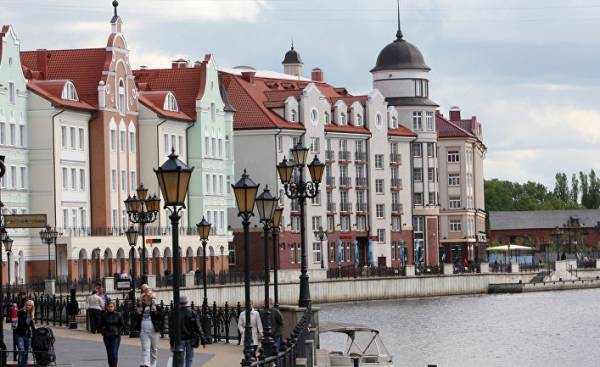 New treatment facilities for wastewater are introduced today in operation in the Russian enclave of Kaliningrad. It is assumed that wastewater treatment plants that serve the wastewater from more than 400 thousand people, a very positive impact on the ecological state of the Baltic sea.

Work on improvement of current wastewater treatment of the city’s incredibly long, and the project interfered with the notorious delays and inconsistencies associated with the procurement of contractors.

“Work on increase of efficiency of treatment facilities in Kaliningrad began in 1970. After the collapse of the Soviet Union in 1991, the project was stopped, and resumed only in 2000. the Real development work began only in 2010, when the Federal government of Russia has invested in the project money,” — says the Executive Secretary of Coalition Clean Baltic (CCB) in Uppsala Michael Durkin.

“Wastewater treatment plant wastewater in Kaliningrad is still classified as a hot spot. The object will be removed from our list of critical sources of pollution in the case that it will meet the requirements and recommendations of the Baltic Commission. It is necessary to examine the emissions, at least within the year”, — said the expert Helcom Dmitry Frank-Kamenetsky.

“For the ordinary citizens of Kaliningrad this investment will mean that their will not be more torture “flavors” the stinking sewage, which was previously played on open slope, winding along the highway on the Baltic sea,” explains Michael Durkin.

The cost of the project for the construction of new sewage treatment plants reached 85 million euros. Funding was provided by a number of participants. In addition to local forces, such as the city of Kaliningrad Vodokanal Russian state loans for the project was provided by the international financial organization “Nordic investment Bank” and the European Bank of reconstruction and development.

“Environmental issues are our main subjects. Very pleased that we have finally reached the goal with this project. If you imagine that before 150 thousand cubic meters of polluted wastewater each day flowed from Kaliningrad, it becomes clear that the current abatement is an incredible success for the Baltic sea”, — says the Executive Director of the Nordic investment Bank Thomas Bringdal (Thomas Wrangdahl).

In addition to the cash loan, the Swedish Agency for international cooperation and development (Sida) and the Environmental partnership Northern dimension (NDEP) helping with donations. For Sida, the opening of new facilities means a happy ending the nightmare that has tormented the Swedish authorities for decades. Agency Sida has allocated about 145 million Swedish kronor to improve cleaning and delve into all the difficulties which the project was postponed several times.

“All the projects on wastewater treatment in Kaliningrad and the surrounding area suffered from significant delays. That’s a concern. Local politicians try every conceivable way to delay the completion of the project. Often after the timing detected by the undone work or serious weaknesses, and as a result treatment facilities do not perform the function for which they were built,” says Director Ilya Shumanov in the office of the organization for the fight against corruption Transparency International in Kaliningrad.

But now the treatment plant is still unfinished. Although much work still remains. For CCB calculations, only 85% of all households of Kaliningrad is connected to the city wastewater system. Many newly built mansions include lack of effective systems of wastewater treatment. And indeed the urban drainage system water seen better days. The majority of the pipes serve for a hundred years, they have been preserved from the German period of history, when Kaliningrad was called königsberg and belonged to Prussia.

So much dirty water has flowed under the bridges of Koenigsberg and Kaliningrad. Most of the old environmental sins turned into sediments at the bottom of the seaside lagoon at Baltiysk (former Pillau).

“Polish authorities plan to build a canal on the Vistula spit. This project could, in the worst case lead to the fact that the toxic substances, heavy metals and eutrophying salt would get into the current and ended up in the Baltic sea”, — says Mikhail Durkin.