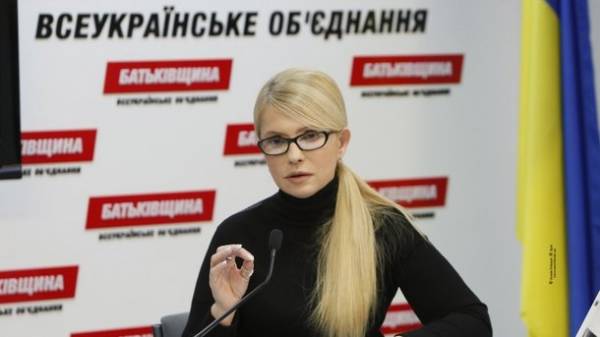 The parliamentary Committee on national security and defence will consider the question of the contract with “Gazprom”, which in 2009 concluded Yulia Tymoshenko and his national security threats. The decision was taken at the Committee meeting on 7 June, reports “Ukrainian truth”.

When voting, ex-member of the faction “Batkivshchyna” Hope Savchenko abstained.

She noted that he considers it inappropriate to submit the issue to the Committee because the Committee’s decision will be populist and will not entail any responsibility.

“So you should not waste the Committee’s time, which should work to protect the state, not on your war with Tymoshenko,” she said, referring to the leader of the BPP Arthur Gerasimov.

“There is no war with Tymoshenko,” – appealed to her MP.

“We have a contract which clearly confirmed Putin received more than $ 30 billion. Just imagine what some of that money went to the purchase of guns and tanks and weapons that kill our people.. Therefore, I sincerely ask to understand the situation,” continued Gerasimov.

As you know, the leader of the BPP Arthur Gerasimov at a meeting of the conciliatory Council on 6 June called on the parliamentary Committee on national security and anti-corruption immediately call the ex-Prime Minister Tymoshenko, and to consider the issue of treason and corruption component of the gas contract of 2009.

He also said that “Block of Petro Poroshenko” wants to anti-corruption authorities checked the 2009 contract.