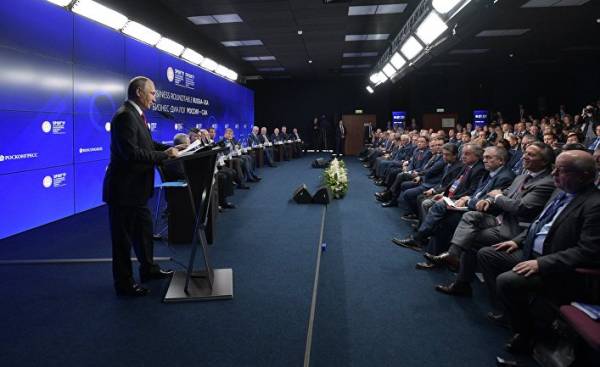 The decision of the President of the United States Donald trump about the release of his country from the Paris climate agreement has caused such a strong negative reaction of the international community, the world had not seen. One of the few leaders who verbally reacted to this decision trump a neutral, or even understanding, was Russian President Vladimir Putin.

Speaking at the St. Petersburg economic forum, he urged “not to make a noise about it, and to create conditions for joint work”. However, the presidents and Prime Ministers from 195 countries signatories to the December 2015 Paris agreement on climate, he preferred to still go on, and seriously. And we can assume that their reaction may lead to the emergence of a new atmosphere in the world, not only climate, but also political, in which the United States will lose its moral leadership.

What is the warming? We have a summer snow

Putin, speaking about the decision of trump, allowed himself to joke. “Speaking of which, we should be grateful to President Trump; today in Moscow, they say, the snow was even here (in St. Petersburg) rain, cold such. Now you can blame everything on him and on us imperialism. But we will not do this”, he said.

Then followed a nod to the “other Donald”. “President Obama said the Russian President, took the decision — maybe the acting President considers that it is not until the end deliberate? Maybe he believes that there are no appropriate resources? This all deserves a closer look. He (Donald trump) it refuses to work on this issue”.

However, almost all other foreign leaders such understanding step trump is not shown.

Politicians from Germany, France and Italy issued a joint statement. They said the Paris agreement to review not. German Chancellor Angela Merkel personally called Trump, to Express their regret. The President of France Emmanuel macron called the decision a mistake for the US and for the whole planet. Canadian Prime Minister Justin Trudeau expressed “deep disappointment” in connection with the decision of the White house.

Theresa may said: “the Paris agreement provides for a true global system of protection prosperity and security of future generations, while maintaining affordable and secure energy for our citizens and businesses”.

Doubt of the correctness of this step was expressed by U.S. Secretary of state Rex Tillerson, who apparently feared, and not without reason, that withdrawal from the Paris agreement will undermine the position of American diplomacy in the world. US media reported that even the President’s daughter Ivanka trump is having a serious impact on his father as well as his official adviser and son-in-law Jared Kushner, also urged the White house not to withdraw from this agreement. But trump did not heed their advice and insisted. He did it in the spirit of his former TV show “the Apprentice” — announced his statement on Twitter and then made a Pink on the White house lawn. It sounded like the verdict of the rest of the world: “You are all dismissed!”

In comments published on their front pages all the world’s leading media, the main idea was the following: the efforts of countries to reduce emissions of carbon dioxide and reduce so-called greenhouse effect, the fight against climate change will continue, but now all countries will act on their own. The United States will hardly seek fame, joining the group of those who have not signed the Paris agreement. And there are only two States — Syria and Nicaragua.

America with jobs, but without a place in the world

Let me remind you that under the Paris agreement of 195 countries have agreed to prevent the increase in the average temperature of the planet by the year 2100 more than 2 degrees Celsius compared to what is called “the pre-industrial era”. However, trump saw in the agreement a greater threat to the American economy. According to his calculations, due to the participation in the agreement, the U.S. could lose about 2.7 million jobs by 2025. In addition, by 2040, the loss of individual sectors of the country ranges from 12% to 86%. The loss of GDP by the same date, Mr trump estimated at $ 3 trillion.

However, many American experts do not leave from these calculations a stone. The next day after the announcement of the trump of withdrawal from the Paris agreement group of 20 former high officials in the different administrations of the White house published a statement which explains in detail the inconsistency of the position of the President.

“The big lie is the fact that the alleged Paris agreement is a killer of jobs in America, — it says. — In fact, it only helped to increase the number of jobs in the country in the twenty-first century. That is why dozens of major corporations, including those whose leaders are in the presidential Council, urged trump to withdraw from the agreement”. For example, in the letter sent to the White house, the leadership of ExxonMobil, said that “this agreement is an effective tool to combat climate change” and the U.S. can compete with other countries under the terms of the agreement.

“The industry must continue to demonstrate leadership in climate issues and not depend on the will of the government, — says the head of General Electric Jeff Immelt. The decision trump condemned the heads of such giants as Google, Goldman Sachs, Apple, Microsoft, IBM and many others. On his withdrawal from the presidential Council announced by the head of Tesla, the famous innovator Elon Musk.

The decision trump welcomed except that the head of the coal companies in the U.S., the income of which is threatened measures for introduction of clean energy, but they were in the minority.

Actions to reduce the risk of climate change and economic development go hand in hand, convinced many experts in the United States. No wonder China, a record for the portion of emissions of carbon dioxide, is investing billions of dollars to develop alternative sources of energy and thus tries to conquer the market of the future.

And the United States, coming out of the Paris agreement, far behind China (the two countries are the world’s largest “polluters” of the environment) leadership in the development of new technologies and will lead to the fact that China will create new jobs, and the United States will lose them. By the way, Beijing has hastened to react to the decision of trump and next week starts the negotiations with the European Union on joint investment in the development of clean energy sources.

But the withdrawal from the agreement creates for the United States and other threats, even in the most sensitive field for the country’s national security. As stated recently the Minister of defense and a key member of the team trump James Mattis, the danger of climate change is that they can cause new refugee flows, more hunger in the world, new conflicts and only act on up to international terrorists. As said Mattis, “climate change threaten stability in regions of the world, which are now our troops”. But Donald trump doesn’t even listen to the words of the Minister of war.

Every man for himself

Not all the long-term consequences of the US withdrawal from the Paris agreement defined. But one of the negative short-term effects may be the loss of most of the world confidence in the United States. “This will seriously complicate any efforts of the President of trump to create the anti-terrorist coalition, as well as the mobilization of the West in any political questions,” said Bruce Jones, Director of the foreign policy program at the Brookings institution. “Strange calculation. The United States did not get out of the agreement, and much to lose.”

“Coming out of the Paris agreement, by sowing doubts in NATO and destroying TPP, President trump embarked on the path of collapse of a world order in which USA was the leader — said cliff Kupchan, Chairman of the company on political risk Group Eurasia. — I think we’re going to “gabrovska” a world in which each exists by itself.”

With the greatest certainty this was said by former President Barack Obama, who signed the Paris agreement. “Out of the Paris agreement, he wrote in the Atlantic magazine, — America, causing serious diplomatic damage. Countries of the world concerned about climate change, they see them as a great danger. But they also understand that the Paris agreement could not be implemented if one of the major powers will leave him. This agreement is actually already dead. Anger and frustration — that’s what will be the emotions of the world from this irresponsible step.”

And Russia is white and fluffy

In St. Petersburg, where these days is the largest economic and political forum of the world, meanwhile, decided that the decision trump could be beneficial to Russia, no wonder President Putin did not criticize him.

For example, under conditions of confrontation between the US and Europe a neutral position of Russia, which in words remains committed to Paris agreement, you may give her significant political dividends. Without any equivocation he said at the forum the head of RUSNANO Anatoly Chubais.

And so we win a superpower. Not because it is stronger, but because the use of weakness. While its leader behaves like a bull in a China shop, we are looking from the street at all events not interfering. And look at this “shiny backgrounds”, according to the architect of Russian capitalism Chubais, “quite civilized”.