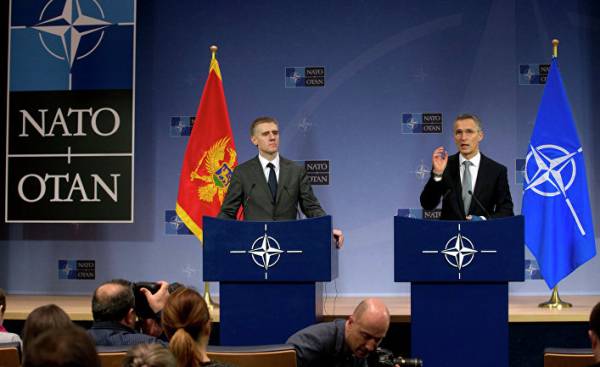 Brussels — When the Prime Minister of Montenegro, Dusko Markovic (Dusko Markovic) last week participated in his first NATO summit in Brussels, it became a symbol of the fact that a small Balkan country the size of a third of the Danish Peninsula Ulland is on the verge of joining the strongest military Alliance in the world.

But the event suddenly became a global humiliation.

The camera lens has got something like a President of the United States Donald trump pushes the Montenegrin leader in the side to get ahead of the group of heads of States and governments. The recording spread like a viral video, and was eagerly seized domestic opponents Markovic, opposed to the course of Montenegro to the West.

Russia also did something to take care of the festive mood for the reception ceremony, which will occur today, Monday, in Washington.

In the past month, the Kremlin imposed a ban on the Montenegrin wine, 10 million bottles which are exported to Russia annually. Officially, the embargo is justified health claims. Russia claims to have found pesticides in wine, but, according to Markovic, it all must be viewed “in the light of NATO membership”.

Cold wind from the East struck and also on tourism. Beautiful Sunny beaches annually attract nearly 200 thousand Russian and about 80 thousand Russian owned in Montenegro real estate. It figures that you need to consider in relation to the total number of the population is 650 thousand. But recently, the speaker of the Russian foreign Ministry Maria Zakharova said that Montenegro has embraced the “anti-Russian hysteria” and advised Russians to stay away from her.

In October, the Montenegrin government ahead of parliamentary elections prevented the alleged attempted coup, which, according to sources in British intelligence, sponsored by Russia.

So why is membership still worth all this trouble?

Within NATO the answer is simple: the strategic position of the country.

As recently announced by the Minister of foreign Affairs USA Rex Tillerson (Rex Tillerson), in a letter to the American Senate, “Montenegro is bordered by five other Balkan countries, including NATO members Croatia and Albania. And its membership will contribute to greater integration, democratic reforms, security and stability in the region.”

“Not so long ago a bloody war was in the Balkans, and powerful flows of refugees sought to us, so we are very interested in the Balkans continued on his way towards Europe,” says Mikael Zilmer-Jones.

With the exception of small strips of land which belongs to Bosnia and Herzegovina, the adoption of Montenegro also means the spread of control of NATO on the Northern shore of the Mediterranean sea that is strategically attractive. As recently as in 2013, for example, Russia has asked permission to use the Montenegrin ports, but received, to the frustration of Moscow, the refusal, as the Parliament is the capital city of Podgorica did not want to go against the interests of NATO.

Although trump words gave a beating to their allies because they do not spend the required 2% of GDP on defense, the admission of Montenegro he approved. Montenegro also comes with a very small military budget of 1.7% of GDP, which corresponds to 50 million Euro, and 53 times less than the military budget of Denmark. She also has less than 2 thousand soldiers, a total of 13 helicopters and three patrol boats.

Will contribute to the stability

In Montenegro I hope that this achievement will protect the country from unrest in the region.

In case of Serbian or Albanian leaders once again begin to dream of hegemony in the greater part of the territory of the region. After all, many people still regret the collapse of Yugoslavia after the Balkan wars in the 1990s, as shown by the survey Gallup World Poll, given to radio Free Europe.

The highest this figure was in Serbia, where as many as 81% of respondents regret the breakup.

But the opinion of Montenegrins on this issue were divided. Many believe that Russia is a historical and traditional ally. In addition, many remember that NATO in 1999, Montenegro was bombed and killed 10 people. Observers fear that this will create fertile ground for probably a larger concern than stability.

The Prime Minister Markovic, however, has not the slightest doubt:

“The Balkans for decades been a battleground between East and West. Like other countries in the region, Montenegro has strong links with the East, but in 2006 we made a strategic decision that we want to adopt the Western standards and values,” he said recently.