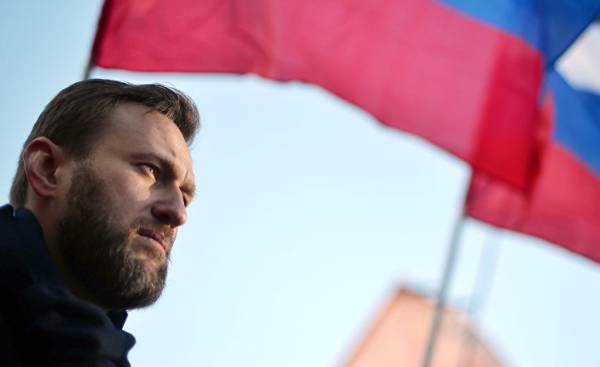 Handsome man shakes hands with his supporters, members of staff make selfi on the background of the campaign logo in the colors of the national flag. At first glance — the usual scene for the election campaign. But the man’s name is Alexei Navalny, and his campaign ahead of presidential elections 2018 in Russia is far from mediocrity. Though, because sentenced to probation for theft cannot stand for election.

Pro-Kremlin activists have done the Bulk of the target: after the attack when he was doused with green paint, he still sees the bad in his right eye. But whatever has made the Kremlin, Navalny popularity is growing. And even starting to think that this young politician could really compete with Vladimir Putin.

The Opponents Of The Kremlin

Today Alexey Navalny is, undeniably, the most prominent Russian opposition politician: heard 80% of Russians. In the conditions of information blockade in television and political environment, reminiscent of scorched earth, such a figure is literally a miracle.

In late March, Navalny managed to organize demonstrations against corruption, which was attended by 60 thousand people. And this would not be surprising, because in 2011-2012 took to the streets two times more demonstrators. However, the current protests were held in eight cities, including Yoshkar-Ola, where performances had not happened for 20 years. The majority of the protests were unauthorized, therefore the participants were threatened with arrest. Affected was probably not only the Kremlin, but also the Bulk.

Now he is experiencing a peak in his political career. In 2000, he joined the old liberal party Yabloko, and then headed its Moscow branch. But seven years later he was expelled for “nationalistic activities”. Witnesses of those events say that the main reason was the desire Bulk to take the place of the founder of the party Grigory Yavlinsky and to modernize the organization.

Alexei Navalny — a nationalist. He participated in the creation of the movement “People”, the main idea of which was proclaimed “healthy nationalism”. In understanding the Bulk of it was embodied, first, in the slogan “Enough feeding the Caucasus” (an allusion to the size of the grants for the republics of the North Caucasus and crime among migrants from these regions who came to Russian cities).

Navalny took part in the so-called “Russian marches”, where you can meet the whole group of marginalized persons, starting with Orthodox mystics, and ending with staunch neo-Nazis. But the past five years, the Bulk does not appear there. “My participation in the Russian March is turning into a hell of a Comedy: as Boniface surrounded by children, I’ll walk in a crowd of 140 photographers and cameramen who try to film me in the background ziguyuschih students. Of course, our “Kremlin friends” will do anything to these ziguyuschih around me was a lot,” he commented his decision in 2013.

A fighter against corruption

Instead of nationalism, Alexei Navalny has relied on the criticism of corruption. He once again proved that he can come up with an exciting slogan and a successful formula, calling the ruling party “United Russia” “party of crooks and thieves”.

The demonstrations in the winter of 2011-2012, Navalny was one of the most popular protesters. In 2013 he ran for mayor of Moscow and received considerable support — more than 27% of the vote. But the race can not be called normal election. At the time Navalny had to serve a five-year sentence to which he was sentenced, the court of Kirov for alleged theft (we are talking about a case more of those days, when Navalny was an adviser to the local Governor Nikita Belykh). However, in Moscow and St.-Petersburg some tens of thousands of people protested against the verdict, and the Prosecutor’s office filed a protest of the fact that Navalny is already sitting, and the verdict has not yet entered into force. This is what has allowed Navalny to participate in the Moscow elections.

When they ended, the court of appeal ruled that Navalny is guilty, but the punishment he replaced the suspended. In the past year, Navalny has won a case in the Strasbourg court of human rights, however, re-a court in Russia has taken into account all of the same evidence and confirmed the previous verdict.

Thus, because of a conviction Navalny could not participate in any election, including presidential.

However, the politician behaves as if the prohibitions do not apply to him. He has already begun collecting signatures in support of his candidacy. “We have nothing to lose. Yes, and until the spring of 2018, when there will be elections, anything can happen,” — says a source close to Navalny.

“Navalny intelligent, educated, and he is a born politician, — said Russian political analyst Alexander Morozov. — He knows how to use the latest technologies, realizes that he must speak concisely, to create “memes” and rely on word of mouth. In addition, he has the political intuition, which helps him to maintain the image of an independent policy in extremely difficult conditions.”

It is clearly seen that as the Bulk presents the results of investigations of his Fund of struggle against corruption. During the many months of work, the Bulk colleagues found that unites luxurious residence in the town of Plyos on the Volga, as well as a Palace in the suburbs of Moscow, and several companies, including winemaking in Tuscany. Them, uses Dmitry Medvedev, although formally they belong to charities, which runs a classmate of Medvedev with the law faculty of the Ilya Eliseev.

Part of ownership of these funds gave the oligarchs. For example, the co-owner of London football club “Arsenal” Alisher Usmanov gave Medvedev a house worth 89 million dollars.

All of these discoveries Fund Navalny backed up documents, extracts from registers and other things. Part of the facts were known before, but Navalny has directed the film, which included footage taken from drones, infographics, and supplied it all with sarcastic remarks. Today this video has got on “YouTube” more than 21 million views. This means that the film was watched by 20% of adult Russians.

This film gave the occasion for the March demonstrations. Some participants brought them rubber ducks as a hint that Medvedev’s residence at the lake even built a special house for these birds.

The success of the demonstrations contributed videoblogger. The phenomenon of experiencing videobloggers in Russia, as elsewhere in the world, boom, and the most popular bloggers have millions of subscribers. “The vast majority of these people were completely apolitical. But after laws were passed restricting the Internet give you the right to put people behind a comment in social networks, bloggers interested in what is happening. They suddenly realized that political issues gives them new subscribers,” — said the journalist Eugene Snezhkin, which has long been engaged in this field.

A good example of a stand-up comedian Daniel Cross, one of the first called on its viewers to take part in the campaign Bulk. “He never missed an opportunity to walk the competitors. He said he understands why others are just taking the piss and signing contracts with sponsors. But he is bolder, so it can support the Bulk and personally come to the demonstration. During the week most of famous bloggers also made a video in which they stated that they are against corruption and not afraid of anything,” smiles Snezhkin.

For example, the blogger Nikolai Sobolev, who answered the call of the Cross, on social networks 2.9 million readers.

What to do with Navalny

The Kremlin appears unable to decide what to do with Alexei Navalny. All the steps taken against him before this policy was able to pay for their own benefit. Bulk travels to Russia and opens regional headquarters — already 41. In some cities in front of the headquarters protested the Pro-Kremlin activists, and the Bulk of the attacked several times by unknown vandals, it was obligately green paint. Once she burned the Bulk of her right eye and had to have surgery.

Since then, attacks again. “I don’t know who is behind these actions, the initiative whether it is local or available to the Kremlin. But it is clear that the Bulk they only helped. I mean, in terms of PR, not health,” says Anton Krylov, a columnist for the Pro-Kremlin “server View”.

In the war with the Bulk entered and Alisher Usmanov, the fifth-richest Russian, whose fortune is estimated at 15.2 billion dollars. Co-owner of the club “Arsenal” shot a video in which he denied all accusations of its own address and the address of Dmitry Medvedev and Navalny himself called a criminal and a liar.

From the point of view of PR success is not called. Chunky Usmanov made a video on his luxury yacht. He turns to Bulk at you and speaks the language of criminals, and ends the speech with the cry: “FIE on you, Bulk!”

On the Internet, Usmanov became the object of ridicule: a photo collage on which oligarch is depicted in the role of Jabba the Hutt, a Bulk in the role of Han Solo from “Star wars”, can be attributed to the condescending jokes.

Navalny responded with a video that tells how Usmanov became rich on the export of Russian natural resources abroad, and how he evaded taxes by using the same trick practiced “Yukos” businessman Mikhail Khodorkovsky. This video was published on Monday, and by Tuesday night it has gained over 2.2 million views.

The question is, how long the Kremlin will tolerate the activities of Navalny. “They don’t need a new Khodorkovsky. They tried to close down his brother as a hostage, deprived him of the opportunity to run, but realized that the Bulk will not stop. Now, I think, in the course of going more drastic measures”, — believes Alexander Morozov.

Do not agree with Anton Krylov with the Pro-Kremlin servers. “Navalny in the Kremlin have a patron, who at least knows how to negotiate with the courts to Bulk not put. I don’t want to speculate who it could be, but this man exists. The Kremlin is not monolithic,” — said the commentator.

Political analyst Tatiana Stanovaya noted that Vyacheslav Volodin, was a hardliner in the Kremlin’s internal politics, stood at the head of the Parliament and new people who instead are engaged in domestic policies, do not prefer power, and political decisions.

One way or another, but everything that happened with Alexei Navalny to date suggests that his fate will be very interesting to watch in the future.