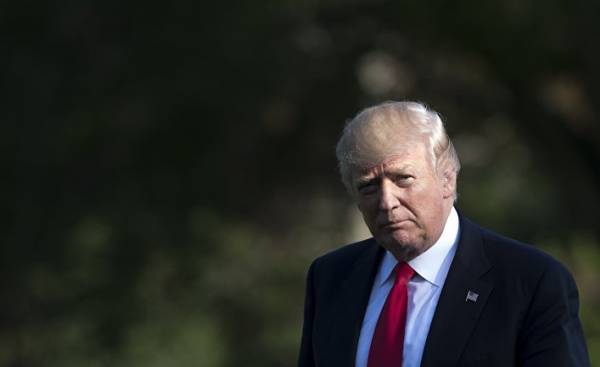 President Donald trump has fulfilled a key promise of his campaign, declaring that the United States out of the Paris climate agreement.

The Paris agreement, under which the United States had to drastically reduce the emissions of greenhouse gases in the atmosphere, it was truly a bad deal — bad for American taxpayers and American energy companies and for every American who needs cheap and reliable energy.

It’s also a bad deal for countries that continue to implement the Paris agreement. Trump was right, coming out of it, and there are four reasons.

1. The Paris agreement is costly and ineffective

The Paris agreement turned out to be very expensive, and it virtually does not help to solve the problem of climate change.

In the case of its implementation coordinated in Paris by the Obama administration’s energy rules and regulations will lead to the elimination of hundreds of jobs, harm the American industry, and by 2035 will deprive America $ 2.5 trillion GDP.

Coming out of the Paris agreement, trump had eliminated a huge barrier to achieving the three-percent economic growth, which was used to America.

But just to abandon the implementation of the Paris norms and rules is not enough. The validity of the Paris agreement substantially exceeds the period of the administration of trump; and remaining in the sphere of its action, the United States would be forced to abide by its terms.

While this agreement requires that countries every five years, starting in 2020, updating its commitments, making them more ambitious. Because of this, the United States would be unable to refuse even to maintain the initial commitment of the Obama administration to reduce greenhouse gas emissions by 26-28%.

By accepting these commitments, the Obama administration has made it clear that reductions will only increase in the future reaching up to 80%.

And if we talk about the benefits of the Paris agreement climate, they are almost there.

Even if all countries fulfil their commitments (and this is a very big “if” given the fact that China has already underestimates the data about its carbon emissions and that there are no consequences for non-compliance is not provided), changes in temperature on our planet would be very difficult to detect.

2. The Paris agreement is a waste of taxpayers ‘ money

During climate talks ahead of the Paris conference, the participants called for the establishment of “Green climate Fund” that by 2020 will annually collect $ 100 billion.

The aim of the Fund is to subsidize clean energy programs and climate adaptation and mitigation in poor countries, and to obtain from these poor countries consent to the signing of the Paris agreement (in practice due to their bribery).

In the end the Obama administration without congressional authorization transferred to this Fund of one billion dollars of American taxpayers.

Some of the main participants in these climate programs in the past were particularly corrupt. This means that the money from the Fund will pick up the corrupt government, rather than those who they really need.

And no transparency referred to in the Paris agreement, this situation is not reversed.

Free enterprise, the rule of law, private property are key components of prosperity. These principles really help people in developing countries to prepare for and cope with climate change and natural disasters. And whether their cause greenhouse gas emissions resulting from human activities or not.

3. The withdrawal from the agreement is a demonstration of leadership

The media raised a huge hype due to the fact that the only country not participating in the Paris agreement, that Syria and Nicaragua.

But it changes nothing, and the Paris deal — still bad. North Korea and Iran signed the Paris agreement, but did not become better.

Someone claims that the US is a shame to give up the lead in the issue of global warming to countries such as China. But to put a sign of moral equality between the US and China on this issue is ridiculous.

China has serious problems with the quality of the air (not carbon dioxide), and Beijing constantly falsificare data on coal consumption and air quality, though, and is a member of the Paris agreement. Any comparisons between the US and China in the field of ecology can not be.

Other countries have plenty of reasons military, economic and diplomatic in nature for cooperation with the United States on matters of mutual concern. And her exit from the Paris agreement, this situation will not change.

Of course, the world leaders in astonishment greeted the U.S. decision to withdraw from the Paris agreement. The same thing happened when the United States withdrew from the Kyoto Protocol.

But if other countries know that the US is ready and able to resist the diplomatic pressure of defending American interests, it will benefit future negotiations.

4. Withdrawal from the Paris agreement is useful for the competitiveness of American energy companies

Some supporters of the Paris agreement saying that the exit will be a lost opportunity for energy companies. Others contend that trump’s actions are irrelevant, as the pace of green energy is very high.

But neither argument do not have sufficient weight to remain in the framework of the Paris agreement.

Whether we’re talking about companies that use traditional fuel, or fuel from renewable sources, the best way to ensure the competitiveness of American energy companies is that they have to act on the market innovative and competitive, not to build their business model on the basis of international agreements.

Withdrawal from the Paris agreement will not prevent Americans continue to invest in new energy technologies.

The energy market is estimated at six trillion dollars, and by 2040 it will increase by a third. About 1.3 billion people still live without electricity, not to mention reliable and affordable energy.

This creates for the private sector to serious market incentives to develop new technologies in energy, not using taxpayers ‘ money.

The U.S. Federal government and the international community needs to stop using other people’s money to subsidize energy technologies, idly watching as because of their control measures replaced by affordable and reliable energy sources.

The Paris agreement was opened by future us administrations, the door for the distribution and expenditure of hundreds of millions of dollars on international climate programs, the Obama administration has done without the consent of Congress.