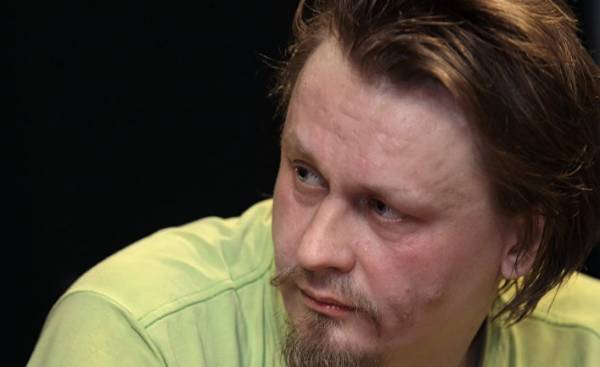 For some time now, Oleg Vorotnikov lives in the Czech Republic together with his wife Natalia Sokol and their three children. Vorotnikov and Sokol member of the group “War”, which became famous for daring performances, full of criticism of the Russian regime. The most famous action was “in the thrall of the FSB” in 2010. Then the group members drew on razvodnom bridge in front of the FSB building in St. Petersburg, a huge sexual organ. In the autumn of the same year Vorotnikov was detained during the action “Palace coup”, when supposedly in search of a lost ball, the activists have turned a few police cars. In early 2012, the Collars went to Italy, then lived in Switzerland where the whole family asked for political asylum. Russia issued an international warrant for the arrest of Vorotnikov, who is accused of hooliganism and insulting the authorities, and violence.

Asylum from “Away” and stealing in the supermarket

In September 2016 Vorotnikov was arrested in the Czech Republic: the police arrested him for stealing in the supermarket. By the time his family for several months lived in the Czech Republic. They were assisted by members of the art group “out of here”. However, over time they gradually became disillusioned in the Russian activists who were at first perceived as his colleagues and a source of inspiration. Czech activists had no appeal to the unwillingness of the Russians to adapt to the Czech conditions, as well as to cooperate and comply with the basic rules of good neighborliness. Finally, the members of the “Away” parted with their Russian counterparts on September 23, when the server Aktuálně.cz had published a controversial interview with Vorotnikov, where he praised Putin. According to Vorotnikov, President of the “United Russian people.” Roman Pow from the group to “get out”, in particular, wrote on Facebook that the family Vorotnikova robbed the apartment of one of his colleagues, Tyco, as well as a Studio in český Krumlov. Pow also wrote that Vorotnikova readily accepted the money, but continued to steal in shops expensive items.

The court released Vorotnikova from pre-trial detention, but he had to promise that he will not abscond until it is complete, and will not leave the Czech Republic. After that, the activist of the family offered shelter himself Karel Schwarzenberg. In November the family moved to castle Cimelice, which was completely at her disposal. But now, for unknown reasons, Vorotnikova again live in Prague. The collar also does not fulfill the promise given to the court, and does not come in for questioning. In addition, he does not live at the address reported to the court. Therefore, recently, the regional Prosecutor’s office again issued a warrant for his arrest. But even if the police arrest him again, it is unlikely that the Czech authorities extradited him to Russia. Moreover, recently, the family was faced with a serious problem: five year old daughter Vorotnikova was hit by a car, and with how her parents treat official institutions, and money, of course, very difficult to provide the child the necessary tests and medical care.

In an abandoned house in Venice

Negative experience with Vorotnikov and his family received and people in other countries who went to meet the Russians at different points in their wanderings. In Venice Vorotnikova lived in a squat, Ospizio Contarini. But their neighbors were complaining that a Russian family hard to live with, and drove Vorotnikov and his family in July 2014 with violence. Collars wanted to protect his home with a hatchet, but in a fight, according to local media, residents of the squat broke the Russian’s head. In April 2015, at the invitation of Adrian REC, Director of international projects at the club “Cabaret Voltaire”, the Russians came to Zurich, and then moved to Basel. In Switzerland, the family asked for political asylum and was accommodated in the squat Wasserstrasse. But after a few months of a very difficult neighborhood locals called Collar “manipulate rude, cruel, ignorant and nesolidno people.” In the end it had to intervene the police. For some time the Russians lived in the centre for asylum-seekers in April 2016 fled in an unknown direction.

May 15, 2017, i.e. during their stay in the Czech Republic, the Russian newspaper Kommersant published a long interview with Vorotnikov, in which he makes critical comments about Europe and says that he feared arrest. “”Friends” pass. We are now living in some abandoned house populated by drug addicts, and right below us the flat, converted into a cannabis plantation. After the warrant of arrest, we tried to hide in the underground, but obtained with great difficulty.”

From the conversation it is clear that Vorotnikova were only negative impressions of life in Europe. According to him, the West indeed is rotten, as at the time liked to say Soviet propaganda. “And to help them, unfortunately, impossible, and maybe it’s even better. But the thing is, that’s all, damn, I’m just here wasting time! In Russia I lived 30 years and 3 years, and for me, this country still remained a mystery, it is full of secrets — in the woods, in town, in the village. And here after six months, I you could everything about everyone to say, who he thinks, how he will hide or show how to act”. According to Vorotnikov, Europe is experiencing an epidemic of psychosis caused by fear for their high standard of living. He argues that the Europeans believe in “absolute darkness”. “In their worldview there is a place — a black hole, such an absolute darkness”.

Art activist complains about the recent incident when the police used to him and his family with force: after meeting with attorney Paul Angle Collar detained by a police patrol, and police was not satisfied with the presented documents. “Leading into the station, we shared and just started beating, and I first encountered this when a woman is hit in the face. Here the police can act arbitrarily, and the company maintains a very tough police action, because living on the front line, on paranoia: they are Russians”. His wife Natalia, nicknamed the Goat commented on the incident: “Even the Russian COP, he wouldn’t have to do so here with the woman with child.” The Prague police, according to her press Secretary, learned about the incident only after a request of the Czech radio (Český rozhlas). Allegedly, in recent weeks or months, none of the aforesaid persons was not addressed in the Supervisory bodies of the Police of the Czech Republic with a complaint against the police. Now to investigate what happened will be members of the Committee for internal control of the Regional police Directorate of Prague, which will check all the circumstances of the case.

“Immortal regiment” can be arranged better

Vorotnikov told about other such instances of brutal violence towards themselves. That’s exactly what he interpreterpath what happened in Venice and Basel. According to Vorotnikov, the cause of the whole incident one. He allegedly says that “can not speak”: “You are a dissident, so know your place, do not break a taboo. Our Pro-Russian stance twice almost cost us our lives, and in the Czech Republic, it took the form of endless persecution, lasting until now”.

If the activist will be able to return to Russia and everything goes smoothly, he plans to engage in official propaganda. Vorotnikov was praised by the famous and the Czech Republic the action “Immortal regiment” — the annual demonstration, which participants March with portraits of their relatives who died during the Second world war. So celebrating the victory over fascism. “It can be done a hundred thousand times brighter, and so it was interesting, visible and evident all over the world. Not only to us, not only some part of Russian society, calling themselves patriots, and in General all, all!” — said Collars.

The show must go on

All of his previous statements appear in a new light after answering a reporter’s question about the previous rejection of money and private property. “Well, we’re artists, we must show the people a show. We really did, we weren’t lying. The goal is to show. To the person who asks a question: and how they got there like five tons of white paint?— you said that way, and not five tons, but only 50 liters. There is a store there are and you have two options: buy or simply open the backpack and put in it”.

Clearly there is only one: the statements and behavior of the activist managed to alienate not only the repressive apparatus of Putin’s Russia, but practically all around. Is it all part of the show, which he shows to the audience throughout his life?