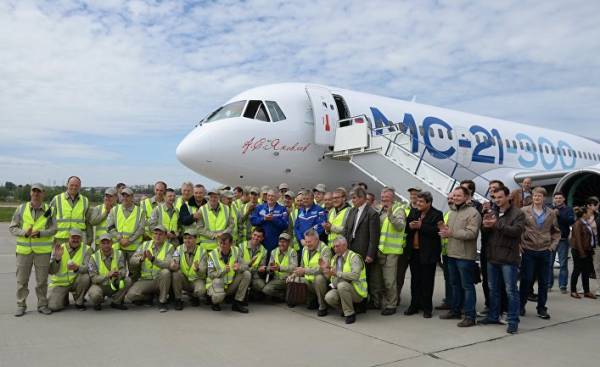 You would think that this new combat aircraft, which does not need to know the world community. Premiere flight of the first Russian passenger plane, corresponding in its characteristics to the competing Airbus A320 and Boeing 737, took place away from the eyes of the international media.

The model MS-21 the Russian company “Irkut” took to the skies almost exactly a year after the official presentation. However, this event occurred on lost somewhere in Siberia, a factory airfield. However, in Twitter, the first photos.

Secret first flight of the Russian model took place three weeks after the premiere of the Chinese competitor to the Airbus model C919. The Chinese showed the flight of his machine live, accompanying the television images a view right from the cockpit.

Moscow, in turn, made the first flight of its first large aircraft developed after the collapse of the Soviet Union in 1991, secrets. In addition to several smaller models Superjet 100, took to the skies in 2008, the Russians still do not create a new civil aircraft.

Official confirmation from the manufacturer — the company “Irkut” — was released only after several hours. According to the report, the flight lasted about 30 minutes, during which the aircraft climbed to an altitude of 1000 meters. Technical issues when this was recorded. For comparison: the Chinese C919 aircraft conducted its first flight in 79 minutes.

Both Moscow and Beijing aim to reduce its dependence on Airbus and Boeing. So they are going to produce a passenger aircraft. President Putin with billions of dollars in investment seeks to return aviation industry of their country to its former glory — as in the days of aircraft designers Tupolev, Ilyushin or Yakovlev.

About ten years ago was founded the United aircraft Corporation (UAC), in which different concerns, in particular, Irkut, MiG, Sukhoi, Ilyushin, or Tupolev, was to join forces and work towards not only military but also civilian aviation.

Although Russia and China on small aircraft are working separately from each other, in the development of future krupnopanelnogo liner they are planning closer cooperation. Recently it became known details about the future of the joint venture, which will build the aircraft with two aisles between rows of seats.

Participate in the production of German robots

Both Chinese and Russian MS-21 model are not entirely their own developments. So, for example, fuel-efficient engine of the Russian plane was developed in conjunction with the American company Pratt & Whitney. In addition, the work involved and the German company MTU Aero Engines. 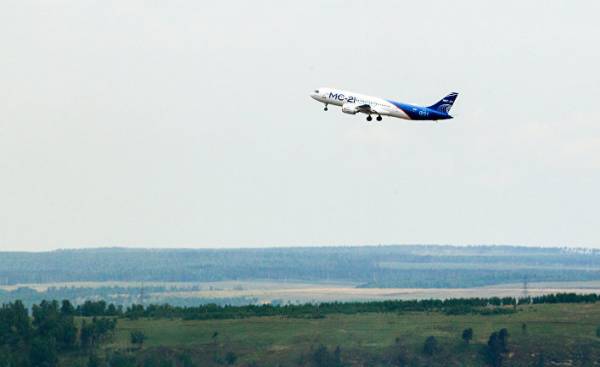 However, Russia and China have long been also developing engines for civil aircraft for which, unlike their military “brothers” at the forefront are such factors as efficiency, quietness, ease of maintenance and reliability.

During the development of the wings also needed the help of the West, in particular, the Austrian company Diamond Aircraft, as well as “daughter” Airbus Premium Aerotec. And in the Assembly of the Russian MS-21 are utilized German robots from Kuka, which, however, is now owned by the Chinese.

No chance against Airbus and Boeing

However, the development of MS-21 and C919 is constantly delayed. Even the current first flight of the Russian plane was scheduled for late 2016. And initially Irkut was going to build it by 2012, then 2015.

When the start operation of the new aircraft on scheduled flights remains unknown, because the first flight was only the beginning of a very costly test programs. Scheduled the production of three versions: the standard MS-21-200 for about 150 passengers, MS-21-300 to 180 passengers MS-21-400 for 210 passengers.

They say that the company already has in its portfolio 175 new cars. This, however, is only a small fraction of the number of orders Airbus and Boeing. The two giants in the coming years plan to manufacture thousands of aircraft small class, respectively, A320 and Boeing 737.