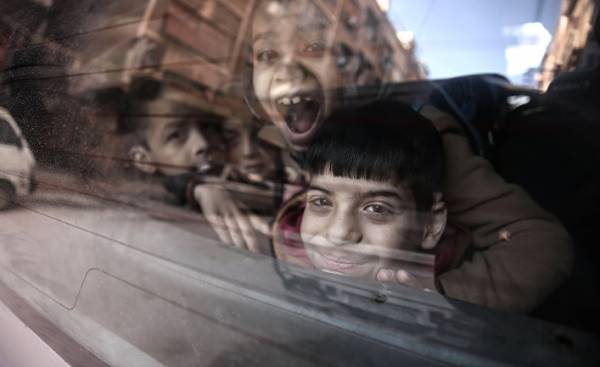 In one of the halls of the specialized center in Riyadh, Damascus, HOMS and his sister Bashar, both deaf, inventing new signs to communicate, to talk about the war that destroyed their country — Syria or six years ago. Since the beginning of the conflict in Syria, the people with special needs, e.g. deaf, must use new cues to talk about the situation on the ground and to Express their feelings and suffering, the reasons for which became twice as much.

One of the new expressions used by the Bashar al-Riyadh in the centre for the deaf in the district of al-Maidan, for example, became “ISIS” (banned in Russia — approx. ed.).

To transmit this expression, the 26-year-old Deputy Director of the center Wasal al-Ahdab twice lifts ring finger (which means the letter “A” in English) and connects the thumb with the index and middle (the letter “S” in English), which means in English “ISIS” or “ISIS” in Arabic.

Al-Ahdab award in biomedical engineering, said: “We had to invent signs (words) that were not available in sign language in Syria, to be able to communicate and share information or feelings about the current violence”. After these signals were invented, they were photographed and posted on a special page in Facebook for distribution among the deaf.

Center Director Ali Ikram said the Agency Agence France-Presse that although the war left a heavy imprint on the lives of Syrians, people with special needs become twice as stronger as they are not able to understand what is happening around them. According to official statistics, the number of deaf-mutes in Syria is about 20 million people, but Trim indicates that in fact there may be five times more.

21-year-old Riyadh, which is involved in the creation of new words and expressions, said that during the war, lived through a great tragedy. So, the war claimed the lives of his mother, brother and sisters. He also lost an aunt, uncle and three cousins who were shot by snipers in front of him. This happened when they tried to leave the quarter, while in the back of a truck, but Riyadh was not aware of what is happening.

This shyly smiling young man working in a factory producing cables, continued: “as I hear nothing, I didn’t understand what was happening around me. I saw my mother fell in front of me, and then my cousins. Only when I saw before me blew the head of my sister, I realized that they were shooting at us”. Riyadh’s suffering did not end there — his other brother was killed during a shootout when they played football in the street.

This young man, who do not leave the memories of what happened to him the tragedies, wants to go abroad: “I think, perhaps, find a better job”.

Deaf are faced with another difficulty that awaits them at the city checkpoints. Ikram explained: “They must Express themselves through some strange servants signals, while the latter usually laugh at them. Previously (before the conflict) the majority of deaf-mutes shunned in their documents was a record of a disability, but now they make this record to show it at the checkpoints”.

His sister Bashar (32 years) has had a rough time because of such misunderstandings. In 2011, while returning home, she was in the crowd of protesters against the regime, while officers tried to disperse them.

A woman with a white kerchief on her head says she tried to escape in one of the alleys of the district of al-Maidan, but she could not. “Nobody could help me because I couldn’t talk to them, and the situation only became worse”. During interrogation, she miraculously managed to explain that she is deaf. After such a shock Bashar no longer dared to leave the house, fearing to be unable to return.

Once in her house as a result of artillery shelling had smashed all the Windows and destroyed the floor. Then the family fled to Lebanon and remained there for two years. When she returned to Damascus, he discovered that everything had changed. It touched a club for the deaf, whose leaders emigrated. Bashar says sadly: “the War scattered everyone, and the people who went abroad, came up with new words and expressions. My friends have changed, they have become aggressive.”

At the end of the conversation, Bashar said, “I hope someday we will meet again, and the deaf and dumb will find a common language.”