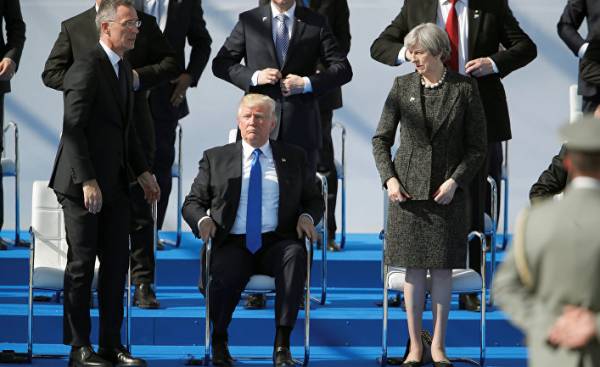 President trump will not allow to be controlled, manipulated, and that his words are interpreted differently.

This is the first conclusion I made after looking in his Thursday speech at the headquarters of the Alliance. On the eve of his first meeting face-to-face with other leaders of the Euro-Atlantic bloc, the U.S. establishment, dealing with issues of national security, tried to set up a classic campaign of persuasion and assurances of devotion. The Europeans said that despite the campaign rhetoric and the ongoing skepticism that this President, like all his predecessors, is absolutely committed to the North Atlantic Treaty Organization. It was assumed that this meeting will be a “moment of adulthood”, when trump, like other presidents of recent times “from outside” (bill Clinton, George Bush, Barack Obama), will be held the rite of initiation into the mysteries of the transatlantic relationship, with the caveat that American leadership is bound hand and foot by the willingness of States to bear most of the financial costs of defense.

It seems that trump has refused from such a scenario. He did not smoke, incense at the altar of the Alliance and to repeat the fundamental creed of the fifth article, that an attack on one is considered an attack on all. Of course, trump, in a sense, believe it or not consider it necessary to repeat, as article five stipulated in the Treaty ratified by the Senate in 1949, and the ratification has to be redone whenever the Alliance to join new members like the last kid picked for Montenegro.

Trump decided not to veto the accession of this new member, and his silence in fact is accord with the requirements of the Alliance. According to the sixth article of the American Constitution, the North Atlantic Treaty has the same weight as the laws of the country. So it doesn’t matter, again of tramp these words or not: it does not matter in terms of American legal obligations.

But the problem is that the wording of the fifth article is pretty vague. It does not oblige member countries to automatically join the war. It only States that they are willing to hold consultations in the event of an armed attack on one member of NATO. And many NATO countries, especially the Baltic sea States, hoping to hear the words of the President that he understands the article five automatic guarantee of mutual defense, which entails a US military response.

I must say that the Initiative on European security based on strategic basic premise that launched in the East a small group of troops from the United States and other countries of the Alliance will act as a cover force, and in the case of a breakthrough of their defenses will start a massive response. Trump today said nothing, and the President of the European Council Donald Tusk morning, and frankly admitted that he and the President there is a common position towards Russia. The Northern and Eastern NATO allies will perceive is not very good.

In addition, trump has demonstrated that he does not intend to completely abandon their statements of electoral campaign of “parasites”. The President directly raised the issue that members of the Alliance must make its share in the total budget for justice. He did it not encoded and the polite language of diplomacy, and sharply and openly, causing noticeable discomfort from other leaders of the NATO countries. Hence it is easy to see how to set up the following equation: devotion to the United States article five is directly proportional to the increase in military spending in other member countries. Stressing the importance of the fight against “Islamic state” (organization banned in Russia — approx. ed.), trump also said that for him the value of NATO is directly tied to its ability to confront the main challenges to national security in his understanding.

The positive is that trump’s statement about coming from the Middle East the threat the Euro-Atlantic world coincides with the point of view of southern and Western flanks of the Alliance in Europe, primarily with France, Italy and Spain. Their common position with the new administration is that the main threat is not Russia, and the growing problems of the Mediterranean basin. However, the first meeting of the tramp with the newly elected French President Emmanuel Macron suggests that a quick and easy convergence on these issues between the élysée Palace and the White house will not.

When trump flew in from Washington, many hoping that he will calm the Europeans who doubts the power, depth and reliability of American commitments to their security. But in Brussels, he did the opposite.