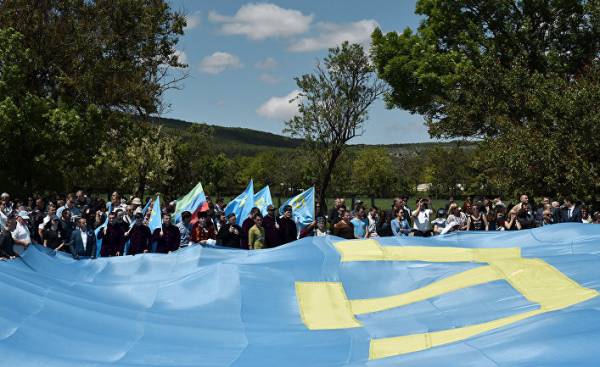 Vadim pristayko, the first Deputy Minister of foreign Affairs of Ukraine, said yesterday that Ukraine will create autonomy for the Crimean Tatars who fled Crimea after the Russian invasion.

In conversation with the correspondent of the newspaper Daily Sabah on the sidelines of the International conference organized on 25 may in Ankara, Centre for strategic studies and devoted to the 25 years of Turkish-Ukrainian relations, Deputy Minister of foreign Affairs pristayko said that after 25 years of independence, Ukraine now realizes that he made a mistake, not allowing to create an Autonomous Crimean Tatar Republic.

“The Autonomous Republic of Crimea, which was illegally annexed by Russia, was founded on geographical boundaries, not ethnic characteristics. Today our President and the Turkish President came to the understanding that we must create a place for the Crimean Tatars, where they could feel at home, said Pristayko. In this regard, our President took the initiative in the Parliament regarding the establishment of an Autonomous Crimean Tatar Republic,” he added.

Crimean Tatars — the indigenous people of Turkish origin — were deported from Crimea to Central Asia in 1944, during the reign of Soviet leader Joseph Stalin, who wanted a way to punish this community. Crimean Tatars began returning from exile about 20 years ago and pledged their loyalty to Ukraine. However, after 20 years of Ukrainian independence, the problems of the Crimean Tatars remain largely unresolved.

18 may 2016 the President of Ukraine Petro Poroshenko stressed the necessity of establishing national autonomy for the Crimean Tatars with full guarantees of equal rights and freedoms enjoyed by ethnic Ukrainians, Russians and other groups on the Peninsula. In April 2017 a bill on the status of the Crimean Tatars was registered in the Ukrainian Parliament. May 11, 2017 the Constitutional Commission of Ukraine decided to establish a working group to develop preliminary proposals for amendments to the Constitution of Ukraine concerning the Autonomous Republic of Crimea and Sevastopol, and the first meeting of this Committee was held may 22. President Poroshenko recently declared that the creation of the Crimean Tatar autonomy would require 300 votes out of 450 in the Ukrainian Parliament.

Commenting on the current level of bilateral relations between Turkey and Ukraine, Deputy Minister of foreign Affairs Pristayko highlighted the strategic political relations between the two countries, and underlined the fact that Ukraine considers Turkey to be a “natural partner”.

Providing detailed information about Minsk process aimed at restoring peace in Eastern Ukraine, Pristayko said that at present, Pro-Russian forces have not been withdrawn, and this situation does not allow you to move forward in the political dialogue and prevents the resolution of the crisis. However pristayko stressed the importance of the Minsk agreements.

“The last two and a half years we are working on implementing the paragraphs of the document called “Minsk agreement” and that the only existing agreement. It is not perfect, and we in Ukraine believe it is unfair that it is the only legal mechanism in order to stop the aggression and stop the advance of the troops, he said. — Currently, we are in a very long negotiation period. After a couple of days I’m heading to Berlin to participate in another round of talks with Deputy foreign Ministers is a special mechanism created by the leaders of the Minsk process, — said Pristayko. — In addition, all four leaders of the Minsk process soon will meet again, and therefore, all these policy initiatives should lead to greater success.”