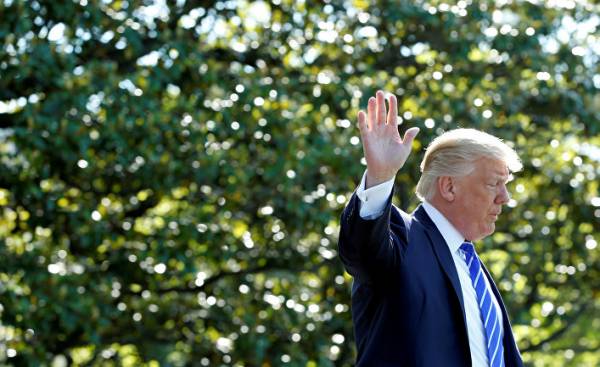 Oh, this Donald trump, he’s just tireless and omnipresent! In Saudi Arabia he performed “sabre dance” with the local king in Jerusalem, he visited the home of the Netanyahu family, and still looked to Rome to the Pope and, of course, to Brussels to European Commission President Jean-Claude Juncker. And now the US President is going to discuss with the participants the “Big seven” some questions of world order. You would think that he, the Almighty ruler of the world, travels the world and then there is a mediating talks with representatives of the three religions — eight days and the triumphant voyage.

However, the very first foreign trip as President of the United States can simultaneously be his farewell tour. On Tuesday, the day after his return to the U.S., trump fired the head of the FBI James Comey to be the speech to Congress, which could have bad consequences for the President: the situation surrounding his dubious business with Russia will not be able to solve a couple of messages on Twitter.

Former Advisor to trump on national security, Michael Flynn and is facing jail time because he refuses to lay out the documents showing the alleged links of the electoral headquarters trump with Russia. At the same time almost every day appear all new and new documents, which say about who trump — perhaps unlawfully — ordered to stop investigating the ties his team to Russia.

To write off trump from accounts still early. But it’s not too early to think about what would the world be without him at the helm in the US — the world that came to power would fundamentally religious and extremely conservative Deputy Mike Pence. After all, Pence is the man also is to be feared many liberal Europeans, because he speaks out against people of different sexual orientation, believes global climate change is a fiction and wants to abolish state benefits for the poor.

Can such a person, as a Penny, to unite a divided country around common values, to give her new, healthy self-confidence, as when did Gerald Ford after the “Watergate” scandal and the resignation of Richard Nixon? We offer to your attention three possible scenarios for the further development of the situation in the world without a President trump.

First scenario: everything will be (even) worse

Trump likes to present itself as a victim, and after dismissal he will have the whole day to write about it on Twitter. He will tell you about the “witch hunt”, about a conspiracy of elites, who from the beginning took a dislike to him and from day one began to disturb him and to try to expel it, the democratically elected President, from the White house. Now he will declare to them all “war”. Tens of thousands of his supporters will flock to the capital to protest against the hated establishment. Thus begins the campaign of Occupy Washington.

In short, the “angry citizens”, which trump has used during the election campaign, will become even more radical. These “new right”, which under the flag of patriotism require granting them additional rights and fundamentally reject globalization, free trade and international cooperation will become even stronger.

President, Pence will take, however, certain efforts on the careful adjustment of confrontational course of trump. Thus, the wall, which he intends to fence off Mexico will remain a low fence. The prohibition for Muslims to enter the USA will be cancelled. Pence also will not call each trade agreement a “bad deal” for the American workforce.

But can the Pens to unite the fans of trump with his enemies? From the point of view of the Democrats, former Governor of Indiana — reactionary. It is not only against gay marriage and abortion, but also wants to allow absolute freedom of the use of weapons, as well as to fill up the already bedstuy us army new billions of dollars. However, Tarnowskie “angry citizens” treat him with suspicion — not least because he became the heir of their idol and making common cause with the “system” in Washington.

Everything else the new President will have from the first day in power to worry about their own prospects — like his predecessor. In the end, Penny is also a member of the team of trump and, quite possibly, also participated in the alleged contacts with the Russians. In addition, it can seriously count on the support of party comrades: among Republicans after the fall of the trump there is a split over whether the presidential term construction magnate, a sort of “event production” in the modern history of the United States or a sign of the times, signal the beginning of a new era and the re-nationalization of American interests.

And what about the Democrats? They are also involved in its own problems. Political “comeback” will be too early for us left — and will be prevented by the loser of the election, Hillary Clinton, who hopes to return to the political forefront. And former President Barack Obama, who is now with insane speed monetizing your oratorical talent and relaxing in the company of various billionaires. They both strengthen the image of the “cabin” of the socialists, who still didn’t understand what everyday living concerns of ordinary voters.

In short, Mike Pence has “zero chance to reconcile the country,” said Stewart Patrick (Patrick Stewart) from the research center entitled “the Council of foreign relations”. According to him, the Penny is not necessary to expect any support from Congress or the support of the majority of Americans: “would Then be programmed political calm”.

Second scenario: everything will be (again) well

However, it will be possible again to dream about America, which perceives itself as a “beacon of democracy”, universal, the country of dreams and the country of unlimited possibilities, open to the world. About this saw her publicist, Henry Luce (Henry Luce), proclaimed in 1941 the beginning of “American century” when the country was a typical selfless mission to help the rest of the world for good.

So the Pens will once again put into use by the White house such virtues as joy discussion and fidelity to the facts. It will bring together the best of advisors representing both political camps, making the main criterion in their selection level of competence, not a coincidence of its position with his own. His party members he said that they all need to look not only at the radicals, but for all Americans. Immediately after taking office, he got on the plane and go to Canada or Mexico to try and “glue” dish, battered in recent months.

And from there he will fly to Berlin and Brussels to try to charm the EU and NATO, where we will announce the revival of the project to establish a Transatlantic trade and investment partnership (TTIP), and also about America’s determination to resolve the situation in Syria and the middle East by diplomatic means. Finally, he will visit Beijing to negotiate with China on measures for climate protection, as well as Tokyo, where they will reiterate the readiness of America to the Pacific development and partnerships. And then we can forget about the isolationist and protectionist politics of Washington as a nightmare.

But all these dreams have one drawback: they are unrealistic, and in this case especially. This is due not only to the fact that when Paying such a development is hardly possible. But public opinion in America has changed. The triumph of trump was not an accident — he was base in the sphere of real politics.

Only relatively few Americans can be called real, radical isolationists, in favour of a total refusal to participate in global politics. But many Americans really want their country turned down the role of world policeman. Idealism and the belief that America must bring democracy to the world has evaporated. Country in recent years has lost too many lives: the war in Afghanistan and Iraq proved to be prohibitively expensive “pleasure”, and people no longer trust politicians who too often invent non-existent in fact the reasons for US intervention in the situation in different countries.

“Americans don’t want to Fund expensive military campaigns abroad, while on the streets of American cities on the pavement there are new potholes and the walls in schools are covered with mold,” says Luke Coffey (Luke Coffey) conservative research center “Heritage Foundation” (the Heritage Foundation).

So trump’s slogan “America above all” is not supported by only his most loyal voters — he will remain relevant after trump, including in matters of trade. Democrats, however, will not assign this slogan myself, but in recent months, they seriously had “shifted” to the left, so now even configured the “socialist” wing, led by Bernie Sanders surprisingly agrees with the trump regarding the rejection of free trade. Therefore, the return to Pacific partnership is unlikely, and the revival of the Transatlantic partnership and does virtually eliminated.

Even agreement on the new rules in a volatile banking sector will in such of framework conditions is problematic. Republicans insist that we need to trust (sometimes blindly) market. And many Democrats dream that their party has become a sort of “movement against wall street,” “party of the people, not big money”. The majority of Democrats want (again) to take care of people — otherwise (and better) than trump, at least not about the rich and powerful.

Elizabeth Warren (Elizabeth Warren), one of the main faces of the Democratic party, wants to break up the big banks. Michael Barr (Michael Barr), the financier from the University of Michigan, all is clear: “Republicans and Democrats in terms of banking regulation pursue diametrically opposed goals.” So the partners of the United States is unlikely to expect that they will be able to rely on the United States — and that they will be able to negotiate with them.

Similarly, things in the foreign policy and security. In this area America is inclined to think that she is no longer able to be as active as acted so far. So let its allies in Europe and Asia take care of our own security and pay for it. For this reason in America, no one argues. So the next US President will insist that NATO partners, particularly Germany, have invested in strengthening their own security at two percent of GDP. The maintenance of free world both financially and militarily, more and more will be considered a common task.

The more that trump makes inviolable America’s leadership role in world politics that it plays after 1945, gradually weakening. In the middle East thanks to a new multi-billion dollar arms contracts with Saudi Arabia and the aggressive anti-Iran rhetoric revealed “in all its glory” not as mediator but as arbiter, shamelessly play along with one of the opposing sides.

Simultaneously, the Russian President Vladimir Putin enters their “kibervoyska” in America, and revels in power in Ukraine, then as China turns into something more than a market of economic opportunity and political “premium partner” shamelessly extending his power in the South China sea or, for example, in mineral-rich Africa.

So let’s summarize: perhaps it would be better if Donald trump some time be President of the United States. Really everything has gone so far that it is difficult to imagine a world without trump’s of the world, with trump at the helm?

American Javelin and the Ukrainian “government” has hit the target: unique video