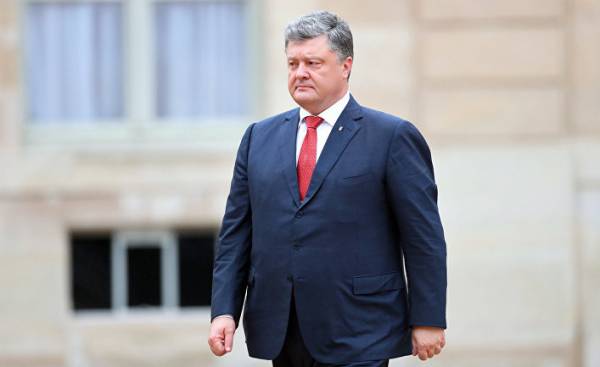 After coming to power, Donald trump has turned away from Ukraine, virtually ignoring the illegal annexation of Crimea by Russia in 2014, as well as its aggression in the Eastern region of Donbass. The costs of this neglect is very high. The conflict in Eastern Ukraine continues to claim victims (victims for today about 10 thousand people) and can easily increase. The bloodshed discourages investors and deprive the country of the ability to become a successful democracy. A violation by Moscow of Ukrainian sovereignty prevents a meaningful “reset” of relations between Russia and the West. A lot today is in a state of uncertainty, and the us President is due to arrive this week in Europe, with its policy towards Ukraine.

As a candidate, trump has demonstrated a willingness to throw Ukraine under the bus. He did hints that recognizes the Crimea part of Russia that will lift the economic sanctions against Moscow and will pave the way towards strong male friendship with Russian President Vladimir Putin. Once in the White house and faced with an investigation into communications between his headquarters with Russia, President trump refused such naivety. But in an effort to improve relations with the Kremlin and at the same time opposing Putin’s power tactics of his own boisterous hardness, trump has some chances to bring the situation in Ukraine impasse.

There are five very important components of diplomatic agreements in Ukraine. First, Washington should directly participate in the negotiations on the implementation of the Minsk agreements, as they call the mechanism agreed to end the conflict in the Donbass in exchange for granting autonomy to this region.

The Obama administration actively participated in these negotiations, but the leading role was given to Berlin and Paris, making it at their request. Now Washington needs to come out and stand in the center, joined forces with the Germans and the French to put pressure on Moscow and Kiev and force them to compromise. As a first step, the administration trump should appoint a special envoy for the talks.

Secondly, the trump must take the obligation to keep sanctions against Russia until, until it begins to comply with the terms of the Minsk agreements, and to persuade its European partners to do the same. Sanctions are the best tool of the West to influence the Kremlin. They harm the economy of President Putin and hurt his ego. They are necessary in order to make him give in. Conversely, to abandon sanctions and to weaken transatlantic solidarity in this matter before, because it is a guarantee that Putin will begin to persist and turn the standoff over Donbass into another “frozen conflict” in Europe.

Third, Washington and its European partners need to clearly tell Russia that it must cease the violence in the Donbas until Ukraine will give the region autonomy. Moscow insists that Kiev has taken the first step. But the Kremlin is well aware that the Ukrainian Parliament in any case will not accept the law, provided by the Minsk agreement, if his soldiers to die in the East. As a first step, Moscow must withdraw its troops and separatist forces from the front lines, as well as store their weapons, making it under international control.

Fourth, if Moscow will comply with these terms, and violence in the Donbass will subside, the Ukrainian Parliament will have to adopt the necessary legislative acts in connection with the Minsk agreements, including the law on elections in the Donbass, the law on regional autonomy of Donbass after the elections and an Amnesty law for the majority of the separatists. The Ukrainian leadership has not prepared for these steps nor society, nor Parliament. Western countries should convince Kiev that their support depends on the readiness of Ukraine to fulfill their part of the bargain.

Fifth, with regard to the Crimea, the West must pursue the policy of “agreement to disagree”. In a decent society that does not recognize, but the Crimea is likely to remain in Russia indefinitely. However, the Western democracies can’t close my eyes on the Russian territorial gains.

The compromise is to keep anti-Russian sanctions associated with the Crimea, and continues to recognize the Peninsula as part of Ukraine, at the same time moving to normalize relations with Moscow in case of compliance with the Minsk agreements. There is a fresh precedent for such an unpleasant juggling. Western democracies condemned Russia for invading Georgia in 2008, however, did not destroy its relations with the Kremlin.

After coming to power, President trump was determined to be friendly towards Russia and are skeptical about NATO and the EU. Then he made a 180-degree turn and became more sober attitude to the Kremlin, said that “NATO is no longer outdated,” and that “a strong Europe is very important to me.”

Arriving in Europe with a reasoned settlement of the conflict in the East of Ukraine, trump can achieve the impossible. If he will achieve a diplomatic breakthrough on Ukraine, he will be able to create conditions for improving relations with Moscow, in favor of which he spoke repeatedly, and at the same time, it will retain TRANS-Atlantic solidarity.

The author is Professor at Georgetown University teaching international business. In the past, he was special assistant to President Barack Obama on national security issues.

Eomurchu
What is striking is that the author of this nonsense is a University Professor. It does not speak in favor of academic standards at Georgetown University. Crimea will remain Russian, because the vast majority of its inhabitants are Russian. And Donbass will refuse to capitulate to Kiev, if not be sure that will end discrimination against the Russian-speaking population.
First, let deal with the Nazis in Galicia, and then ask Donbass on cooperation. Let them give up their claims to Crimea and recognize the right of the people living there to determine their own future — as Britain recognizes the right of the people of Scotland (sometimes) to decide their fate.

X10
There is no chance that the military in the Donbass will agree to “store their weapons under international control”, while they on the threshold is poorly controlled Ukrainian army and its Nazi henchmen, and while Ukraine will not accept the necessary laws. Kupchan inveterate Russophobe, and it was a lie. The article as a whole is ridiculous.

The Zeus
“The compromise is to keep anti-Russian sanctions associated with the Crimea, and continues to recognize the Peninsula as part of Ukraine, at the same time moving to normalize relations with Moscow in case of compliance with the Minsk agreements”.
This is a vivid example of the warped views of the current establishment of the world. I hope that trump will end this.
How can I do normalization of relations with Moscow, while maintaining the sanctions? That is, according to this line of thinking, Russian can cheat to force to remove the embargo of food (for normalization), while maintaining its own sanctions, and acting like we are the masters of this world! Nonsense! It won’t work. Makron has invited Putin to Paris not in order to lecture him, and to look for ways to the lifting of sanctions and the abolition of the food embargo. Otherwise we will find ourselves in the dustbin of history.