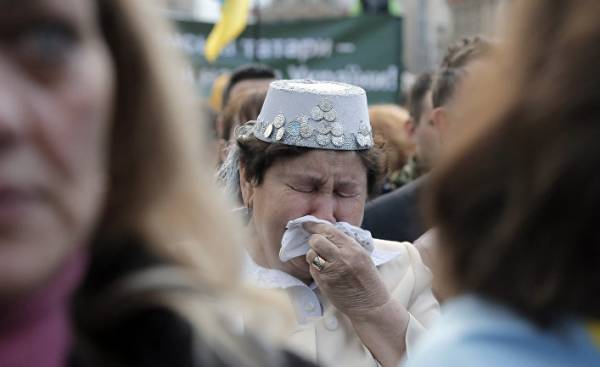 In December 2015, the Prosecutor of the Autonomous Republic of Crimea started criminal proceedings on the fact of forcible resettlement of the Crimean Tatars and other ethnic groups from Crimea in 1944. And although from the moment of the crime’s 73 witnesses is becoming less and Russia refuses to help the Ukrainian investigation, prosecutors signed the suspicion of committing a genocide against the Crimean Tatars by Joseph Stalin and Lavrenti Beria.

The symbolic date — may 18, the place of the official General Prosecutor of Ukraine, the guests of honor — the witness of the deportation Elmira Ishmuratova, the Prosecutor General Yuri Lutsenko, the leader of the Crimean Tatar people Mustafa Cemil. In such a situation, the Prosecutor of the Autonomous Republic of Crimea Svetlana bludova signs the suspicion in Commission of crime the head of the Soviet Union. This procedural step has excited the social network, saying “the dead do not answer” and the Prosecutor “nothing to do”. The questions “how?” and “why?” — sound more frequently than others.

To answer them, and to dot the i “of Crimea.Realities” asked the Prosecutor of the Autonomous Republic of Crimea Gunduz Mammadov.

“The Crimea.Reality”: What is the purpose of the investigation and perhaps later on the trial?

Gunduz Mammadov: the Fact of genocide of the Crimean Tatar people are obvious to many people, but for some it remains a subject of controversy and speculation. It is important for us to conduct legal rehabilitation of an entire people. In relation to the Crimean Tatars had committed a serious crime and it is our task to demonstrate that there is undeniable proof of that. For the first time given a legal assessment of the fact that sets the guilty and gives the right to rehabilitation, including from the point of view of the restoration of the good name.

We have one goal — the restoration of historical justice: rehabilitation of victims and the establishment of a legally significant fact. The result of the investigation must be fact-finding, including the guilt or innocence of a person on the basis of complete, objective, comprehensive investigation of all available evidence.

For many, it remains unclear — why blame those who can’t pay the penalty?

Genocide refers to crimes that have no Statute of limitations. Ukrainian national legislation allows to investigate the criminal proceedings even in those persons who are no longer alive. In accordance with national legislation, must be installed on the perpetrators. Not to say that these people are guilty — all the same that to say that there was no genocide, no victim, no crime. But the decision can accept only court, our task is to provide irrefutable facts of the crime.

Documents informing about the suspicion has to be sent to a specific person? In this case, where will be sent notification?

— The mechanism of national legislation is that we notify personally suspect, or relatives, or through official sources of the media that the suspected person or interested persons had been notified of this step. Unfortunately, other procedure no.

In this case, you use the direction through the media?

— And not only. We will take measures to establish close relatives, although the circle of persons in accordance with the requirements of the criminal procedure code, is limited. There is another procedure of international orders, we have agreements on cooperation and mutual assistance with other countries.

— That is, it is possible that the documents will be handed over to Russia?

— The current work of the office is by analogy with the conduct of a criminal case on the Holodomor of 1932-1933 years, where the accused was also Soviet and party leaders?

— We studied more than 300 volumes of the case. Let me remind you, also Stalin, Molotov, Kaganovich and others were found guilty of organizing the crime. Famine, the case was sent to court. However, there is a significant difference — the famine was investigated under the old criminal procedure code. In our situation there are differences in the decision-making procedure, including the Prosecutor.

In the case of famine were active awareness training companies to make this decision. In our case, we have no support to implement tasks, so often in society, there are misunderstandings.

— What is the future of this business?