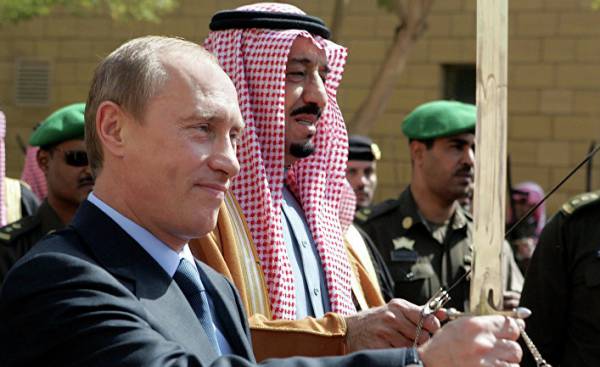 Saudi Arabia and Russia disagree on almost all issues, including the war in Syria, policy towards Iran and ties with Washington. But when it comes to the need to raise the world price of oil, between them there is complete agreement.

Note how these two world’s largest oil producer has teamed up in may to inform the markets about its willingness to extend the agreement to reduce oil production for another nine months. Leaks and official statements of Riyadh and Moscow, which appeared prior to the approval of the renewal agreement to reduce with the countries of the OPEC on Thursday, may 18, led to a rise in the price of oil by 5%.

“We are talking about two countries that are very dependent on oil,” said Igor Yusufov, who from 2001 to 2004 held the post of Minister of energy of Russia — at that time the two countries collaborated in the field of energy policy.

Their current “marriage of convenience” is the result of the urgent need to stabilize the price of oil, exports of which depend their economy and the legitimacy of political regimes. In the process, Russia and Saudi Arabia are trying to change the balance of power, which manages the processes on the global energy market now that OPEC’s influence is gradually decreasing.

The answer to the question would be whether the Alliance is strong enough, if he passes the test of time or it will quickly disintegrate, largely depends on how effective tool for increasing oil prices will the decision to extend the agreement to reduce oil production until March 2018. In the case of Saudi Arabia, the stakes are especially high because the US — its longtime and loyal customer — now strengthened their market position as a manufacturer.

Saudi Arabia and Russia have strong internal reasons to follow this course. Vladimir Putin wants to boost Russia’s economy, which is struggling to recover after two years of recession before the presidential elections in 2018. The Prince of Saudi Arabia Mohammed bin Salman (Mohammed bin Salman), who is responsible for massive economic reconstruction, a more stable price of oil to increase value of the company Aramco in anticipation of the IPO, which will take place later this year.

The price of Brent crude oil increased from 46 to 53 dollars per barrel since then, at the end of last year signed an agreement on the reduction of oil production to 1.8 million barrels a day. However, its price has already reduced by 8% compared with the peak values that were recorded during the first wave of enthusiasm, because of the continuing glut in the market.

In this situation is nothing new. The last time the Saudis and the Russians tried to coordinate oil policy — it was a five-year time period ending in 2004, their attempts failed, because Moscow has not fulfilled his promise regarding the extent of production cuts, and Riyadh out of myself.

This happened even before the us shale industry has shaken the balance of power in the world oil market and forced oil exporters to adapt to changing conditions. Since the beginning of the fall in oil prices in mid-2014, they are faced with the problem of shortfall of funds in the budget, which caused many to take out loans and drain savings.

“The main driving force is the income from the sale of oil,” says John brown (John Browne), Executive Chairman of the Board of Directors of L1 Energy, the units of the investment Fund Mikhail Fridman LetterOne Holdings, and the former head of BP. However, according to him, not less important motive is the desire to improve “the geopolitical role of energy.”

According to the leaders of oil companies, analysts and government officials overseeing these two countries, in addition to money, in this case a major role is played by political reasons and the desire to end years of rivalry over oil.

Riyadh sees an oil policy tool to influence Russian policy in the middle East, where Saudi Arabia and Russia supported opposing sides in conflicts in Syria and Yemen. To demonstrate readiness for cooperation, Putin and Prince Mohammed held a private meeting on the sidelines of the summit Big twenty in China.

In April, Prince Mohammed said in an interview with the Washington Post that collaboration ultimately came upon the friendly relations of Moscow with Iran — the enemy of Saudi Arabia. “The main challenge is to convince Russia not to do all its bets in the region on Iran,” said 31-year-old Prince in the interview.

Meanwhile, for the first time since the collapse of the Soviet Union in 1991, Moscow has sought to increase its influence in the middle East, often encountering the US.

For oil traders, the Alliance of Saudi Arabia and Russia changed the balance of power. For many years, they carefully watched the comments and statements of officials of the energy ministries of the middle Eastern countries, speaking on the sidelines of OPEC meetings in Vienna hotels, and now they have become much more attentive to the comments of the Kremlin.

Such a sudden change in the relationship occurred after a decade of antagonism in the field of energy policies: in 2008, when for five months the price of oil fell more than $ 100, Russia has refused to cooperate with Saudi Arabia to stabilize prices.

The market situation has changed

At a meeting in Vienna in November 2014, the then Minister of energy of Saudi Arabia Ali al-Naimi (Ali Al-Naimi), and Igor Sechin, head of Russian giant Rosneft, argued about how to manage the oil production. Sechin said about the unacceptability of reduction of production, adding that the Russian company will continue mining in the same amount. Naimi could not hide his anger.

“No one seems ready to cut, so I guess the meeting is over,” said he.

The new Alliance is Saudi Arabia and Russia new faces: Minister of energy Alexander Novak and Khalid al-falih (Khalid Al-Falih), who held the position Naimi after his resignation in may 2016. Six months later, these two managed to convince some two dozen countries of the need to cut production. They often talk on the phone and has already had several joint press conferences. Several times they have issued joint statements to support oil prices.

However, the discord in this relationship can occur as fast as the warming. The output of shale oil are rising so fast that, according to forecasts, oil production in America could reach a record high of 10 million barrels a day next year, according to the office of information in the field of energy. This is more than Saudi Arabia produces at this moment.

This trend could have a negative impact on the symbiosis of Russia and Saudi Arabia. A few days ago, Sechin urged the government to develop a plan for withdrawal from the agreement on the reduction of production volumes and promised to be “ready to compete”. In March “Rosneft” has warned about the dangers of “resume price war”.

If American manufacturers would not agree to go on reduction of volumes of production together with the Saudis and the Russians, which began as a result of the war for the market to destroy the market, warned a former Russian energy Minister Yusufov.