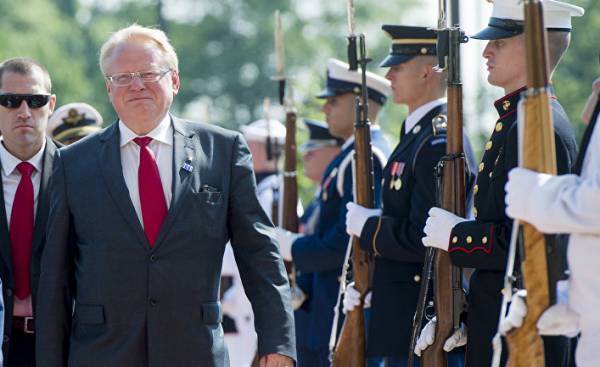 Leaks of classified information, on suspicion in the attempt to stop the police investigation of unfair contacts with the Russians and — as if all the previous wasn’t enough, suspected that the Russians interfered with the election campaign. Russia has become the Donald trump of the grinning Ghost, the President of trouble.

For Peter Hultqvist and James Mattis military aggressiveness and unpredictability of Russia, the largest common threat. It affects their planning, defense Economics, weapons, doctrine, and cooperation. The goal of President Putin, according to Peter Hultqvist, again to make Russia a world power.

On Tuesday in a speech at Johns Hopkins University he called the hard reality is unacceptable: Russia has occupied 20% of territory of Georgia, annexed Crimea and indirectly waging war in the East of Ukraine, and also supports the Assad regime in Syria committed terrible crimes against the people.

The relationship between Europe and the United States critical to balance Russia, and of course this topic will be discussed at the meeting with James Mattis, said Peter Hultqvist, the newspaper Göteborgs-Posten:

“We are going to discuss the situation in the field of security in connection with the buildup of military forces in Russia, the consequences of the annexation of Crimea and the ongoing teachings and intelligence activities. European unity and the transatlantic link strong, depends on our security”.

It is no secret that Russian in different ways want to try to split the West, says Peter Hultqvist. Together with the Supreme commander Michael Budina (Micael Bydén) he warns about the risk of Russian disinformation in connection with military exercises, “Aurora”, which will be held in the fall. In the exercises will participate and the U.S. marine corps.

“It will be the largest exercises that Sweden did for the last 23 years, they will take part 20 thousand soldiers and 40 organizations. The scenario assumes the defense of Sweden and nothing else. This is correct and incredibly important. We believe that it is very important to speak and tell their point of view. It is sometimes argued that it would be something more than a purely Swedish exercises. But in fact they do not contribute to increased tension, on the contrary”.

Cyber war — part of Russian military doctrine. Misinformation and fabricated news are used systematically, according to Peter Hultqvist, who himself suffered from this when his name appeared on a falsified document on arms supplies to Ukraine.

“False ideas spread to influence public opinion and political attitudes. Also they probably hope to subsequently affect exercise participants. I believe that clarity is the best way to counter this”.

Makron has undergone to hacker attack

President Emmanuel macron was under attack during the French election campaign. Experts from 27 countries gathered in Prague to figure out how to stop the alleged Russian influence on the election campaign. In the US, as mentioned above, the Russian intervention is also a hot topic.

“We weren’t doing enough, says Peter Hultqvist. We must realize that the information arena is constantly used by various forces to spread false representations. I think we are only at the beginning of the struggle against it. We entered into Stratcom (associated with NATO information centre, which including investigating the Russian campaigns of influence in Riga) and allocated more of some resources, but this is not the end. We must continue to develop our competence and methods of work”.

Russia conducts large-scale military exercises along the border with Estonia, Latvia and Lithuania. 50 ships recently participated in exercises in the Baltic sea, based in the Russian enclave of Kaliningrad. Other exercises, “Zapad-17”, will take place simultaneously with the “Aurora”.

“When things happen at the same time, there is space for speculation, but I’ll just content myself with stating the fact, says the defense Minister. — It is important to explain the purpose of our exercises. All aspects are within those political decisions, which were adopted, respectively the agreement on defense”.

However, what about the Crimea, he still adds:

“This operation with the use of military force for the purpose of annexing the territory of another country. In the beginning of the operation managed to cause a decent mess and issues, both in Ukraine and in the rest of the world. Of course, we must take into account that the behavior of Russia there are also strategic considerations.”

“Cooperation with Russia is possible”

Sweden has a military attache in Moscow, and Russian in Stockholm. But no military exchange does not occur.

Last year he was in the United States and together with the then Minister of defense Ashton Carter (Ashton Carter) signed a document of intention to deepen military cooperation. The result: teaching, information exchange, cooperation on equipment and resources and strategic dialogue.

“It is very important that the US participate in the development of our part of Europe, and Europe as a whole. It is important to create balance in a position where we are today. Now I hope to develop cooperation with the new administration”.

Next week Donald trump participates in the NATO summit in Brussels that will be his international debut in this area. Peter hultquist waiting for trump, as in the past and his Vice President, confirmed the importance of the transatlantic link between Europe and the United States.

The first and largest exercise of this kind for more than 20 years. Will involve all military forces and nearly 20 thousand men and women, of which a quarter — militia. In addition, participates in many organizations and military units from other countries, including the United States.

Exercises will be conducted in the air, on land and at sea. Will be affected troops all over Sweden, but the largest areas of the game will be Malardalen and Stockholm, Gotland and the water around it, as well as Gothenburg.