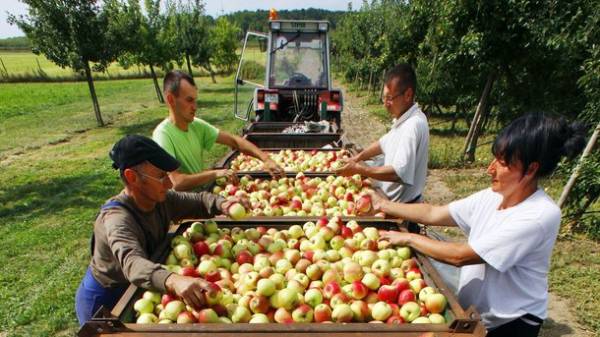 Jam will be this year for Ukrainians luxury — April frost destroyed almost completely the color of the apricot trees, afflicted gardeners across the country. And may the cold suddenly hit after the holidays, seriously damaged the ovary on the cherries, peaches, plums, which, according to experts of the sector will affect how the crop and prices. According to preliminary estimates, prices may be higher than last year by 20-30%. Fortunately, not suffered a lot of berries, especially strawberries, although it will also be more expensive.

DAMAGE. According to experts of arosita SuperAgronom.com cold killed 60-100% of apricot harvest in most regions, except the far South and the coastal zone. Most affected Cherkasy and Kirovohrad region, here the branches of the trees were 10-15% of the ovary. A similar situation in the Dnipropetrovsk region, the North of Odessa and Mykolaiv regions. “In Cherkassy region 11 may night frost on the ground was –1–6 °C and continued for about 7 hours, this happened for the first time in more than 100 years of observations. Frosts could destroy the harvest of all fruit, berry plants, early vegetables, for which the critical temperature is 1–3 °C”, — told us the chief meteorologist Cherkasy Vitaly Postrigan. It will be bad for the apples: in Lviv and Rivne, where many garden farms, due to cold weather and rains the tree did not even blossom if rotted. Manufacturers of Vinnytsia region talking about the death of 30% of the strawberry bushes. “The loss of the crop of early berries in the Western regions of Ukraine, which were the most severe frosts, reaches 90% and the fruit yield up to 50%”, — reported the experts of the Ukrainian club of agrarian business. The head of the Association “Ukrsudprom” Dmitry Kroshka told us that a more detailed assessment of the consequences of the frost will be possible only in a month.

CONSEQUENCES. The main consequence of the damage caused by the elements, — considerable growth of prices for fruits, experts say. “Prices will definitely be higher than last year, but how much is hard to say, not yet calculated yield losses, explained Baby. — You should not rely on imports of fruit from Europe, as there are also work elements: there were frosts, and floods”. But the Director of the Association of retail suppliers Oleksiy Doroshenko, on the one hand, recognizes that the yield of berries and stone fruit will be much less than a year ago, on the other, believes that the situation is not as critical as farmers say. “According to our data, no everywhere, “all is lost”, but farmers have a commercial interest to dramatize the consequences of bad weather — to justify higher prices for fruit, — said Doroshenko. — Prices may be higher than last year by about 30%. For example, early strawberries from Transcarpathia, is not affected by the may frost, may 1, cost 80 UAH/kg (a year ago it was the same. — Ed.) may 10 — 55 UAH, the cost is falling every day.” The President Ukranalittsentra Alexander Ohrimenko predicted minimum price for strawberries and cherries this year: “Not less than 40 UAH/kg in mid-June. Last year was 25-30. For plums, cherries and apricots, the price at least 20% more than a year ago — up to 50 UAH/kg.”

From the may frost affected not only the trees. “Okuchit already blackened potatoes, frozen just planted tomatoes, went missing corn seedlings”, — told us the resident of the village of Yablunivka in Cherkasy Catherine Burliuk. Experts soothe: fault in “the second bread” will not be in vegetables too. “In Ukraine of the 18-20 million tons of potatoes grown each year, lost in the vaults of a third, yet the same is eaten by people and livestock. In addition, potatoes, corn and tomatoes not too late to replant, just harvest will ripen a little later,” — said Doroshenko. Also, he said, potatoes can be imported from Egypt and Belarus. However, prices will be higher in the peak season 6-8 UAH/kg, or a third more expensive.