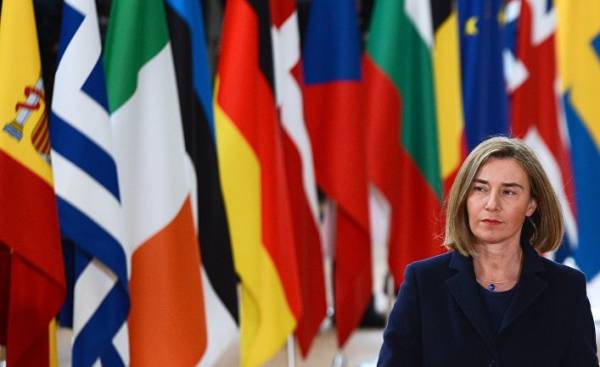 The European Union is not only not retreat, but also raises, and it is primarily concerned with the Balkan States.

La Stampa: Makron won the presidential elections in France, with the outspoken Pro-European message. What does this mean for the future of the EU?

Mogherini: After the referendum on Brexia many predicted that this vote would be the beginning of the end, but more recent elections, not only the elections in France demonstrated the opposite result. Of course, there are problems that need to be addressed because the citizens of Europe are experiencing real difficulties. But Europeans are beginning to understand that they can lose. The French clearly stated that support the European project and want to update it, because I consider it part of the solution to their problems.

— After the spread of the wave of populism Europeans are beginning to understand the value of what they built in a time when the risk to lose it?

It’s obvious, first of all, the one who looks at us Europeans, not from Europe. When I travel to Asia, Africa, North and South America, all asking me, do we realize that we have created. Our world is going through a very unstable period, requiring multilateral solutions. Other continents look to the EU as a model and guarantee the stability, they are jealous of the peace and prosperity we have achieved over the last 60 years. Instability affects everyone in the world, and we also faced difficulties and challenges inequality. However, I think many Europeans understand that the EU is a tool of overcoming problems, inspiring us even more strength to deal with the challenges of globalization. We have the resolve to move forward together. A great proof that we have seen in Rome during the celebration of the 60th anniversary of the signing of the Treaty of Rome. After all, the EU even after the withdrawal of great Britain from its composition will be the first market in the world, the first international provider of humanitarian aid, the first trading partner for most countries and second largest economy in the world: together we are stronger.

— A British exit would not weaken the EU?

I’m sure the future of the European Union is not limited to 27 States because we will have new members. I’m talking about the Balkan States with which we are negotiating about accession to the EU. Many call this process “extension”, I prefer to talk about the unification of Europe.

— Serbia, Montenegro, Kosovo hopes to join the European Union, including to allow in the EU, their difficulties and thus to overcome them. At what stage are the negotiations about their joining?

— Due to ties in each of these countries with the EU, in many respects, managed to treat the wound left after the wars that took place just 20 years ago. There is still a long and difficult road, and it will not always be direct. But I am confident that he will continue, in particular due to the fact that each of these countries have a common future in the European Union.

During the presidential campaign, Donald trump said that he expects other countries will follow the example of Breccia. As President, he said that the European Union is doing a good job, and now he supports it. What is the relationship of the EU with Washington?

Good. In Washington and Brussels, I met several times with Vice President Pence, Secretary of state Tillerson, national security Advisor to the McMaster and defence Minister Mattis. Here in new York I met with Nikki Haley. We have a beautiful, always open channels of communication.

One of the issues that you may have differences, is the nuclear agreement with Iran, which trump plans to stop.

We all very clearly explained that they intend to guarantee the full implementation of the agreement. The EU is determined to support the agreement, including the fact that the International atomic energy Agency for five time showed that Iran fully complies with its obligations under the non-proliferation of nuclear weapons. This is the Foundation of security in the region, Europe and the world.

— What can the EU do to stop the war in Syria?

— We support the decision of the UN special representative De Mistura for the resumption of negotiations in Geneva next week and act very coherently. We want to help the Syrians in a political transition, not only with humanitarian aid but also in support of negotiations in Geneva. At the international conference on Syria, which I led to Brussels last month, we began to reflect together with the UN and the entire international community how it can support the restoration of the state and peace in Syria, when will the process of political regeneration. All the obvious advantages of peace-time: for the Syrians, for the region, for the entire international community.