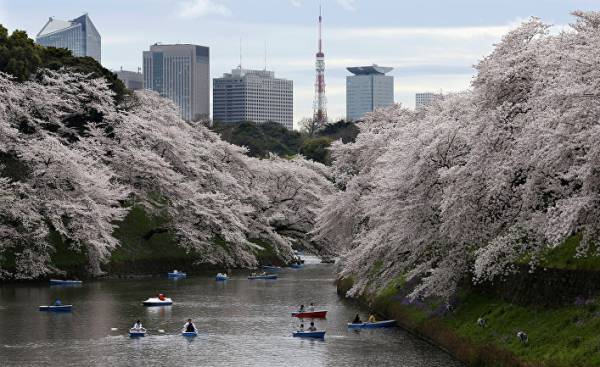 After a meeting of heads of Russia and Japan, held in December last year, the Ministry of foreign Affairs of Japan this year, has simplified the requirements for issuing visas to Russians. With this increased number of Russians visiting Japan. According to the Japanese Minister of state for tourism, in the period from January to March this year Japan was visited by the Russians 22.6% more than in the same period last year. The total number is 15200. Especially in March: the number of Russians increased 43.9% to 7,100 people. As for March, then for the first time since 1964, when the Department began keeping statistics, the number of Russians has exceeded seven thousand people.

In addition, the number of flights between Russia and Japan. Stakeholders expect a further increase in flow.

Regarding simplification of procedure of issuance of visas for Russians (1) was introduced multiple-entry tourist visas valid for three years, (2) simplified procedure for obtaining a business multi-entry visas, but their duration increased from three to five years.

The government of Japan believes that the increase of human exchange between Russia and Japan will promote negotiations on a peace agreement, including the problem of “Northern territories”.

Meanwhile, in Japan last year was attended by 55 thousand Russians, which is only 0.2% of the total number of foreigners in Japan. In comparison with China (6.37 million people), South Korea (5,09 million) and other neighbouring countries is an extremely small amount. Among the 20 countries for which the tourism Ministry focuses in connection with the increase in the number of tourist trips to Japan, Russia was in last place.

Against this background, in December last year, the leaders of Russia and Japan have agreed to make 2018 the year of Russian-Japanese exchange. During the April meeting with President Putin, Prime Minister Abe said: “I hope the Russians will closely communicate with the Japanese.” President Putin also welcomed the extension of exchange between people.

In this regard, the airline JAL has decided since July this year to increase the number of flights route Narita — Moscow from five to seven a week. Russian airline “Aurora” also in March, increased the number of flights on the route Yuzhno-Sakhalinsk — Synthetase from two to three a week. Airline S7 at the end of April launched a new flight from Vladivostok to Osaka. The aircraft on this route will fly twice a week. “In addition to Tokyo, Osaka, and Kyoto, in Russia, also popular is Hokkaido. If you advertise the fact that summer in Hokkaido is not very hot, most likely, the number of tourists will increase”, — said the head of the Russian office of the Japanese Minister of state for tourism Valentin Shestak.