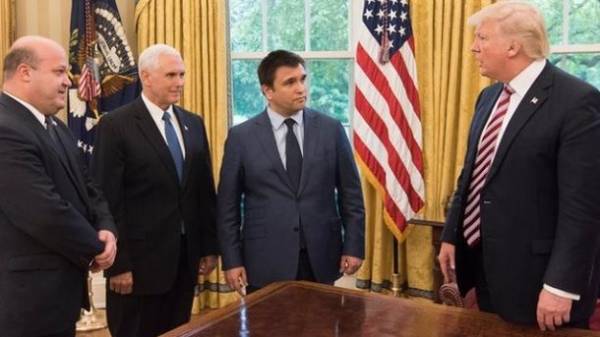 Foreign Minister Pavlo Klimkin during a meeting with the leadership of the United States received assurances of full support of Ukraine by Washington. This was stated on air of TV channel “112 Ukraine” the speaker of the foreign Ministry Marian Betz.

According to her, Klimkin managed to convey to the President of the United States Donald trump Ukraine’s position on Russia’s actions and the situation in the Donbas.

“We received clear assurances of the support of the American party to the sovereignty and territorial integrity of Ukraine within its internationally recognized borders. Discussed in detail the situation in the Donbas, execution of Minsk agreements. We are very grateful to American side for unwavering stance in support of Ukraine. What took place on those visits, is a great success of Ukrainian diplomacy. We were once again convinced that we have a clear support and understanding from the American side, what is aggression and how it is threatening,” said Betz.

In turn, Pavlo Klimkin and Ambassador of Ukraine to the United States Valeriy Chaly after the meeting, Donald trump said that the Americans claim in support of Ukraine.