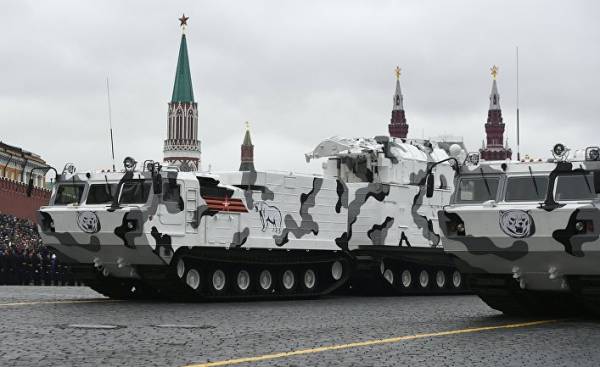 “And can I have one more picture?” — ask curious Russian Lieutenant A. B. Kulakov on Tverskaya street in Central Moscow.

“Of course,” smiles fists and puts down a white helmet.

Kulakov and his colleagues from the new Arctic brigade called “bears special forces”. Here, on the street, he is now the most popular person. Children and women lined up to do a selfie.

His task as an officer in a brand new anti-aircraft complex “tor-М2ДТ” missile Pantsir SA to shoot down fighters, helicopters and missiles in the Arctic.

These weapons now demonstrated for the first time in Moscow during the Grand parade on the occasion of victory Day.

They must operate at minus 50

Kulakov and his fellow soldiers serve in one of two new Arctic brigades.

After holidays in Moscow “spetsnaz bears” will go to the Kola Peninsula and the new Russian military base on Alexandra Land, 300 km from the Eastern part of Spitsbergen.

The technique is a special track, which was tested in winter conditions: they must work in ice and snow.

Weapons must be able to endure the monstrous Arctic cold of minus 50 degrees and shoot down fighter jets at a distance of 20 km.

Comments about the North escalate

“Conflicts in the Arctic region have no potential,” said Putin in Arkhangelsk in March and proposed to expand the cooperation in the region, which in the future will become the most important Russian region in terms of extraction of natural resources.

“This is one of the most important problems for security in the modern world”, — Putin said.

Subsequently, the rhetoric has escalated — and in relation to Norway too.

In March 8 thousands of NATO soldiers held one of the largest military exercise in Finnmark about 30 miles (300 km — approx. ed.) from the border.

“The military structure of NATO is moving in the direction of the Arctic”, — said the Minister of defence of Russia Sergey Shoigu in April, the Russian conference devoted to problems of security, and then moved to criticism of Norway.

“In the North of Norway, near the border with Russia, created a modern training centre, where military contingents of NATO are hosted on a rotational basis,” — said Shoigu, reports TASS.

Near the border with Russia in this base there. But since January, 300 us Marines are in Bernese — 1.5 thousand kilometers from the border.

Managed from the Kremlin TV channel “Russia” claimed in the “60 minutes” that “NATO is preparing for an attack on Russia.”

The assertion that Norway and NATO provoking Russia

In February, the Russian Ambassador in Norway has described relations with Norway as “unsatisfactory” and in an interview with High North News asked the question: does Norway “to expose the dangers of the border”?

Russia is also very rapidly reacted to the fact that the NATO parliamentary Assembly 8-10 may decide to hold a conference in Svalbard.

“This is a provocation which could lead to further escalation of tensions in the Arctic,” — said in this connection the Russian authorities.

The Norwegian side has rejected the criticism, citing, in particular, that MPs are not formally part of NATO.

May 8, NATO launched a new military exercise in Estonia, which Moscow also used as an argument in favor of the fact that Russia is surrounded by.

Russian military construction in the North

Russia claims that a new team must defend the Northern sea route length of over 5 thousand kilometers and to ensure the security of Russia in the Arctic.

Here are just a few of many examples of the strengthening of military power of Russia in the North in the last two years:

• The number of exercises in the North Atlantic and the Norwegian sea has increased dramatically and the Russians shortened the period of time during which they should inform about them to neighbouring countries, in particular Norway.

• Nuclear forces on the Kola Peninsula near Norway are increasing that the newspaper Barents Observer this week confirmed documented with a few satellite photos.

• The Northern fleet, which serve 5 thousand soldiers and sailors, after 2015, has received, according to Interfax, 25 new ships.

• NATO exercises in the Baltics in 2015, Russia responded to the direction to the Arctic for the very short time of 80 thousand soldiers and military equipment.

• Up to 2020 will be created a number of new military bases, said in March the Russian Minister of defense.

After a visit to Putin in April, the new Arctic military base, the Russian military has posted a virtual tour of the base.

The Russian demonstration of force over Alaska

But Russian military activity is still inferior to the activity of the Soviet Union.

Compared with NATO, the Russians have a much smaller military resources — unless you count nuclear missiles.

4 may Russian played again muscles in Alaska, when two Russian strategic bombers Tu-95 in support of the fighter entered the area of American PVO over international waters.

According to the American media, the bombers were only 80 km away from Alaska, it’s closer than ever.

Circus and show of force

The Russians, with which the correspondent of Aftenposten spoke on the streets of Moscow on may 9, felt a sense of joy and pride, although bad weather and could significantly spoil the occasion.

May 9 parade must also show that the Russian have something for the 600 billion crowns (as in the original article — ed. ed.), who last year was spent on the military.

In 2016, the military budget rose 5.9%, while spending on most other articles are reduced, and the standard of living falls.

“Look! Here our polar bear!” — enthusiastically says Russian dad and asks Lieutenant Kulakov whether he could take a picture with his son.

“You are the best in the world!”

How to get rich Ukrainians in 2017: how many Ukrainians live in poverty, and how they will grow revenues