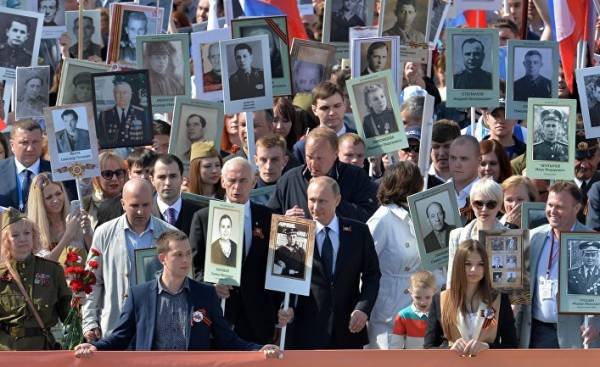 According to official figures, on Tuesday March in memory involved in the Second world war ancestors in Moscow alone-took part 800 thousand people, including President Vladimir Putin. The memory of participants of war underlies Putin’s version of Russian patriotism and became an important part of the ideology, the strengthening of Russia’s geopolitical self-confidence. However, the so-called movement “Immortal regiment” there is another side that undermines this ideology. Its leaders argue that according to the declassified statistics, the Soviet Union lost during the war, the astronomical number of lives of 42 million people is officially recognized 27 million.

“Immortal regiment” — tradition to go out on 9 may, the anniversary of the Soviet victory, the procession with photos of relatives who fought — emerged in 2000. It was started as a grass-roots movement. The name he was given three journalists from Tomsk. The Kremlin’s decision to lead this initiative replaced the Patriotic impulse of local activists officious propaganda efforts aimed at the transformation of the victory of 1945 in support of Russian national pride. The issue of rapprochement with the authorities stirred up a quarrel between the organizers and in the end, the Moscow branch of the “Immortal regiment” broke and completely subordinated to the Kremlin’s instructions.

However, the original idea of “Immortal regiment” there was something contrary to the official approach. In the end, almost all the people in these photos are dead. Many of them died in the war that destroyed a hefty portion of the population of the Soviet Union and left entire families and even villages without men.

In February, the Russian Parliament held hearings on “the Immortal regiment” as part of “Patriotic education”. The event was attended by many deputies and a number of representatives of various government offices that was a sign of support at the highest level, which was the movement. Opening the hearing, the MP Vyacheslav Nikonov spoke about the need to protect the Russian victory against hybrid attacks, and from the revival of Nazism in Ukraine. However, after that, another parliamentarian, Nikolay Zemtsov, who was one of the founders of the “Immortal regiment” and one of the most active supporters giving him an official character, made a surprise announcement.

Prepared for hearings report Zemtsova was told that, according to declassified in the post-Soviet era figures, Second world war killed 41,979 million Soviet citizens — about 19 million soldiers and 23 million civilians.

In Russia the calculation of the losses of the Second world war has always been a matter of state policy. Joseph Stalin downplayed Soviet losses — it was about seven millions. Later, Nikita Khrushchev admitted that killed 20 million people, in 1970-ies and 1980-ies in the Soviet school I was called this figure. In the last years of Soviet power, President Mikhail Gorbachev, officially began to talk about 27 millions. It was an uncomfortable figure: Germany lost — according to official estimates, which some historians believe is understated, is 7.3 million people. Huge price paid for the Soviet victory led many to wonder about the quality of Stalin’s leadership and how the Soviet state valued human life.

Further 27 million official figure. Putin referred to it in his speeches. According to the famous work of General Grigori Krivosheev “the Great Patriotic war without secrecy” published with state support in 2009, the total number of victims is 26.6 million. This figure was obtained using extrapolation on the basis of certain censuses. Assessment Zemtsova, based on the work of historian Igor Ivlev, relies on other sources. The State planning Committee, statistical and distribution center of the Soviet planned economy was more specific data, but, as was said Ivlev, they were not military personnel, which are accounted for separately.

The population of the Soviet Union, according to Ivlev, amounted to a total of 205 million people in 1941 and 169,8 million in 1945. When you consider 17.6 million births, and assumed natural mortality at the level of 1941, which means that war-related losses reach 42 million people.

Although the approach Ivlev doubt from some historians, his data is now semi-officially discussed by the people responsible for the use of the memory of the war for “Patriotic education.” If these numbers are correct, they underscore the scale of the Russian tragedy and the price that the country paid for ridding the world of Nazism. But at the same time they testify to a Pyrrhic victory of a dictator who didn’t care how many people die, according to his orders. Pompous celebrations in honor of the anniversary of victory in the aftermath of the 2014 invasion of Crimea, and the ubiquitous slogan “Can you repeat” look on the background derived Ivleva casualty figures just ominous.

Russia’s losses were so great that it would have to be the most peaceful country in the world — even less warlike than Germany, consciously holding military activity at a low level, despite a complete rejection of the heritage of their aggressive leaders of the 20th century. If she really lost the Second world war a quarter of the population, it must strive to ensure that never again is not a “repeat”. However, Putin’s raids on neighbouring countries and its readiness for military operations far from the Russian border, ignore those sad memories that awakens the “Immortal regiment”.

Even the cost of victory is sometimes incredibly expensive. Putin could have thought about that when he went along with the crowd, carrying a portrait of his father, who fought and came back alive — but not his brother Victor, who died of diphtheria in the besieged Leningrad. 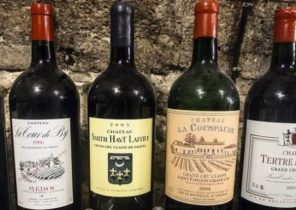