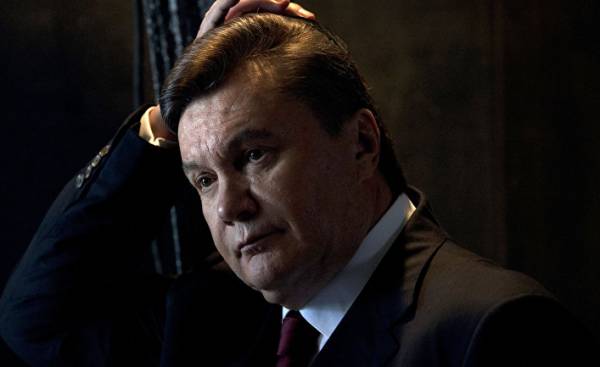 In the state budget of Ukraine received about $ 1.5 billion from the previously arrested assets of fugitive ex-President Viktor Yanukovych. Despite the fact that the confiscation procedure, the money, comparable to the amount of the tranche of the IMF as promises the government, will be used for the benefit of the domestic economy. Experts recommend the approach to their expenditure wisely, and “Apostrophe” understood to go to such means.

District court of Kramatorsk in Donetsk region last week decided to transfer to the state budget of Ukraine about $ 1.5 billion, which were blocked in the accounts of fugitive ex-President of Ukraine Viktor Yanukovych and his entourage in “Oshchadbank”. This “Apostrophes” reported in a press-service of Secretary of the national security and defense Council (NSDC) Alexander Turchinov. These funds on 28 April was transferred to the state account “oschadbanku”.

The President of Ukraine Petro Poroshenko on may 3, said that in total we are talking about $ 1.3 billion of which $ 1.1 billion deposited on the accounts of the State Treasury service, and another $ 200 million in securities will be transferred to the Ministry of Finance.

Legally or by law?

The return to the Ukrainian budget money Yanukovych and his entourage discussed in 2014. Then the financial monitoring Service has identified more than 40 companies, non-residents, close to the former President, and blocked the accounts of 19 of these companies about $ 1.5 billion. However, the confiscation of these funds was hindered by the absence of relevant legislation — the Parliament several times refused to consider the bill on special confiscation, and in December of 2016, successfully failed.

“Given that Parliament was not able to make this decision, I want to thank the attorney General personally to the General Prosecutor of Ukraine Yury Lutsenko for what they are without any PR professional has worked the case and was not just a decision on provisional confiscation, and the sentence of the court, the final decision about crediting of these funds to the accounts of the State Treasury to the state budget of Ukraine”, — said Alexander Turchinov.

According to Yuri Lutsenko, since the verdict has been a month designated to appeal, the decision entered into force. The President, in turn, believes that everything is done within the law. “I want to inform you that as of now (may 3) no complaint to this decision is not received. And the so-called owners to certify their claims on the money, and did not appear”, — said Petro Poroshenko.

However, the people’s Deputy Serhiy Leshchenko argues that the confiscation was carried out with serious violations. According to him, the case of “Yanukovych’s money” is not the jurisdiction of the court in Kramatorsk. In addition, according to the MP, the funds associated with Yanukovych and his entourage have been arrested in one case and confiscated — on a completely different. Besides, since the opening of criminal proceedings according to which confiscated funds until a decision is passed only two weeks, said Leshchenko.

The money for the army and not only

However, the money credited to the state budget, and now the main question: what they will spend? According to Petro Poroshenko, they will be directed, primarily, at strengthening the capabilities of the Armed forces of Ukraine, the National guard, State border service, the police. In particular, they planned to build a munitions factory, to buy the latest electronic warfare systems, counter-battery radars and UAVs. In addition, the President noted that part of the funds should be directed to the construction of a rehabilitation center for soldiers ATO. Another area of their use — social protection of the most vulnerable segments of the population — “so they (money — “Apostrophe”) was not eaten, and invested in infrastructure, and for many years worked for the Ukrainian people.”

How much money is really sent to the army, is still unknown, however, we can say that the defense Ministry is unlikely to rely on all $ 1.5 billion (as mentioned above — in fact the actual amount is less). Assuming the amount of 1 billion dollars, which is also very conditional, it is easy to calculate that specifically you can buy for the money. Ukraine produces tank “Oplot”, which is the latest domestic technical development in the field of armored vehicles. The Ukrainian army a “Bulwark” do not buy, these machines are exported. The main reason is the high price. The contract price of such a tank is us $ 4.9 million, respectively, for the conditional 1 billion to buy 200 tanks “Oplot” (whether this is done is an open question). More budget option — tank “Bulat”, which is a modernized version of the Soviet T-64. Its price — about $ 1 million. This machine is in service with the Ukrainian army, and because counting the number of “Bulatov”, which Ukraine can buy for these money is not idle. Purely arithmetically obtained 1000 pieces.

Possible estimates and other types of equipment. For example, counter-battery radars. For today Ukraine gets such a technique from USA for free. Assuming the price of such equipment (for upper limit) to $ 10 million, then $ 1 billion dollars you can buy 100 of the radar.

The Ukrainian army needs ammunition, as the only cartridge plant in Lugansk in 2014 is under the control of insurgents. Despite the fact that since the Soviet Union there remains a significant amount of ammunition, the construction of such enterprises is an important element of strengthening the country’s defense. That is why the new munitions factory was included in the list of priorities for the expenditure of seized Yanukovych funds. In 2016, the project was proposed the construction of a plant worth $ 80 million. Even if the “round up” that amount to 100 million dollars, which fits into the Ukrainian realities, for these money you can build ten such plants (as, in fact, need such enterprises is to be addressed to specialists and the authorities).

To spend or to save

The government expects to “Yanukovych’s money”, but because of the unresolved issue at the legislative level in the budget 2017 from about 40 billion UAH (about $ 1.5 billion) planned in the framework of the special confiscation, was laid a total of 10.5 billion UAH (about $ 400 million). In January of this year, Prime Minister Vladimir Groisman said that the government expects to receive from the special confiscation of 12 billion UAH (around 450 million dollars).

The Executive Director of the Bleyzer Foundation, President of the Harvard club in Ukraine Oleg Ustenko draws attention to the fact that in the state budget enrolled significantly more funds than that provided financial estimates for the current year. “I believe that there is a serious risk that if you go money to the state budget more than this amount ($400 million), the deputies of the Verkhovna Rada, the Ministry of Finance and the political class of Ukraine there is a huge temptation to use these funds this year,” — said the expert comments, “Apostrophe”.

According to him, the amount of income in excess of that included in the state budget should be directed to a special Fund for use in future years, “because in 2018 and 2019, Ukraine is facing huge payments on external debt — total exceeds $ 10 billion for two years.” Ustenko also noted that if these funds are in foreign currency, then they need to stay “in order to reduce the burden on the Ukrainian payments in 2018-2019”.

Reserves will increase, debt will decrease

Confiscated “Yanukovych’s money” is a significant financial resource. “$1.5 billion is as a tranche of the IMF”, — said in comments “Apostrophe” sales of debt securities at Dragon Capital investment company Sergey Fursa (in April, Ukraine has received from the International monetary Fund tranche in the amount of $ 1 billion and hoped that the following will amount to 1.9 billion dollars — “the Apostrophe”).

According to Petro Poroshenko, the money will be used to replenish gold and currency reserves (GCR) of the National Bank of Ukraine (NBU). The President said that these funds will increase gold reserves to 18.4 billion dollars. “This will ease the pressure on the foreign exchange market by the NBU, and, most likely, at year-end gold reserves of Ukraine will grow by 300-400 million dollars more than expected. I think that is the main economic effect (from the confiscation of “Yanukovych’s money”),” say “Apostrophe” member of Ukrainian society of financial analysts, chief financial analyst of RA “Expert Rating” Vitaly Shapran.

With regard to securities on the $ 200 million that is transferred to the Ministry of Finance, according to Oleg Ustenko, the seized bonds can be spent on the secondary market with a view to their sale. However, as the expert believes, it is much more correct “to write them with the amount of public debt that are hanging now in Ukraine”. Most likely, it will, at least, this was stated by the President. “Reducing debt is an important and positive factor”, — said Sergey Fursa. However, “the Finance Ministry and investors this event will not notice, because the reduction will be minimal”, — said Vitaly Shapran. By the way, as of April 1, state and state guaranteed debt of Ukraine amounted to 72,35 billion.