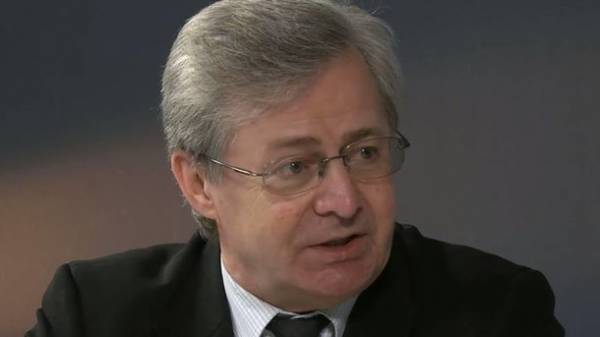 The head of the Constitutional Commission, the current Prime Minister Volodymyr Groysman, who is known as the ideologist of the reform of decentralization, advocated the adoption of another draft of amendments to the Constitution, decentralization. As repeatedly wrote, the site “Today”, moreover, that the text was unperfect, and in clause 18 of the transitional provisions provided for so-called “special status of Donbass”. Its adoption in the first reading on 31 August 2015, has led to the deaths of four national guardsmen under walls of the Verkhovna Rada. Later, despite the tragedy, the constitutional court ruled that the project (contrary to the requirement of the Constitution), you can vote in any next session, not necessarily regular. In fact, the problem of “frozen” for an indefinite period, until it again becomes a question of adoption of the draft amendments to the Constitution on decentralization in the context of the implementation of the Minsk agreements.

About the intricacies of the constitutional process, the law on the special status of Donbass, which Russia strongly promotes, and the chances of adoption of the draft amendments to the Constitution on decentralization read in the first part of an interview with the website “Today” with Deputy head of the Constitutional Commission, scientific Advisor for legal Affairs of the Razumkov Centre Viktor Muzykoy. 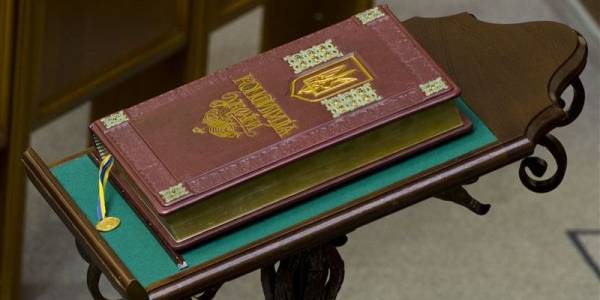 – Two months later – on June 28, we will commemorate Constitution Day. For example, the U.S. Constitution consists of 7 articles and 27 amendments. In the Constitution of Ukraine, article 161 and transitional provisions.

– It is not the number of articles. The US Constitution (adopted 17 September 1787 – Ed.) considered to be the first in the world, although we are trying to defend their superiority by referring to the Constitution of Pylyp Orlyk of 1710, Constitution of the United States appeared almost 80 years. But the essence of the other. The mechanism of amending the US Constitution is very rigid. Among the 200 amendments considered by the Congress, only 27 have become the body of the Constitution. Why? When Congress makes a decision on amendments to the Constitution need 2/3 of the votes of the two houses – the Senate, plus representatives of the Lower house. And then the parliaments of 3/4 of all States must approve these changes. But there is one more detail. In the early 19th century (1804-1805). the U.S. Supreme court began to interpret the Constitution so that his interpretations have become the basis for perception of how to understand the Constitution. One of the judges of the Supreme court of the United States (there are only 9), a few years ago spoke the following formula: the U.S. Constitution is 7 articles, 27 amendments and more than 500 volumes of Supreme court decisions. So keep that in mind when you’re talking about the 7 articles and 27 amendments. Not do we have many articles? Let them be even 300, but the trouble is the other. Why is the question, not how many articles? Because before that you could say that there is a Constitution and cases in the state is not very…

– Nobody does the Constitution…

– Perhaps no country in the world the Basic law is not changed so often. It is good or bad for a developing democracy?

– It all started in 2000. Then-President Leonid Kuchma referendum even started to have the Constitution rewritten. But the attempt to “crush” the power for themselves without success, and went on a compromise version of the amendments to the Constitution of Ukraine became a parliamentary-presidential Republic and became President Viktor Yushchenko.

Legs grow more from the process of adoption of the Constitution in 1996. People who then surrounded Leonid Kuchma, used it as a tool, trying through him to initiate constitutional changes. At the time, Leonid Kuchma has actually created the country that we now call the “oligarchy” through the medium and large privatization. There was a group of people, economic interests which grew into a desire to master the tools of government. They understood that political power is a guarantee of economic power. And so in 2000, the year initiated the referendum on changes to the Constitution. What did they want? Wanted the President could dissolve the Parliament, the Parliament to be reduced from 450 to 300 deputies, to expand the powers of the President… that is, had to be very strict presidential vertical. They didn’t work. Why? Yes, the results of the referendum showed 80-90% response “for” on some issues, in some areas even more than 100%. Overdone, you know how “honest” was held the referendum. But to realize the results are unable. What they made a mistake? They had previously to change the law on all-Ukrainian and local referendum of 1991, to bring it into conformity with the Constitution and to provide mechanisms for the implementation of the referendum results. But in the current then the text of the Law “On all-Ukrainian and local referendum” it was said that the VR should consider the results of the referendum. She examined them, and did not vote.

– All of our presidents until this one, were influenced by their environment, and the constitutional process was initiated on their behalf. The President Yushchenko wanted to bring back the Constitution-96. By the way, in 2004, when changes were made to the Constitution for a year until January 1, 2006 (and according to some authority before April 2006) Yushchenko had the same powers as that of Kuchma. But Viktor Yushchenko they are not very used. But, whatever it was, had the idea to bring back all the powers. How? Tried to do what Yanukovych did in 2010, through the constitutional court. But it so happened then the fact that a number of judges of the constitutional court ended the term of office. BP had been influenced by political forces, who do not want to return to the Constitution-96. Therefore, BP just didn’t give the new judges the opportunity to take the oath, effectively blocking the work of the COP. Then I went to the second attempt began to create a constitutional Council, then it seems to have started to work on amendments to the Constitution, which allow it to change outside of the Parliament – the referendum: what is present in the current law “On referendum” adopted “poperednik”. Viktor went to the polls in 2009 in fact, with the draft of the new Constitution, which he wanted to offer the people. The Venice Commission, by the way, said that this document was not solved the major problem of the relationship of subjects of power: remain grounds for conflict.

– The dualism of power…

– Let’s say: the dualism of power wanted to overcome through the actual submission of the Executive power, the President, as it was in 1996.

– When came to power, Yanukovych, of course, immediately arose the idea of a return to the Constitution in edition of 1996 with a strong presidential component. How to return? According to the Constitution of the people – the sovereign authority, although all these years, the sovereign did not want to give the referendum act. Old of 1991 was new and didn’t want to accept. And then suddenly, when Yanukovych came, began to develop a law on referendum, and Ukrainian. Why? It was necessary for the people to accept the new Constitution. But the new bill on national referendum has filed thousands of amendments. To the vote it was thinking of putting in the summer of 2010, when there was only a couple of dozen people. In the end, deputies round up to the vote could not and decided to go for a more sophisticated way. In the fall, the COP decides: the law number 2222 amending the Constitution in 2004 to declare unconstitutional and to return to the Constitution in edition of 1996.

– The current government also undertook to rewrite the Constitution. Today’s redrawing of the Basic law is openly and honestly?

– Here you need to remember when Yanukovych fled, the Parliament returned the Constitution of 2004, and a little later they had created a Constitutional Commission, which was headed by Vladimir Groisman.

– The Constitution does not stipulate how to act when the President fled. And the state should operate, it’s understandable. In that situation the only legitimate government body remained the Verkhovna Rada. Other solution but to return to the Constitution in edition of 2004, she could not accept. I had an idea that was not taken. I found grounds in the law on the constitutional court, allowing him to return to the 2010 and revise it. I think it was the most legitimate way. But chose another, then Russia annexed Crimea, began all of these processes in the Donbass, and Russia began to generate ideas of federalization of Ukraine. Europe began to support the idea that it is necessary to amend the Constitution and expand the powers of local government. Our bait gave in, and went the process of preparing amendments to the Constitution, decentralization, etc. by Itself, the process of decentralization and empowerment of local governments is normal. But what it had taken shape in 2015-2016 is unacceptable. 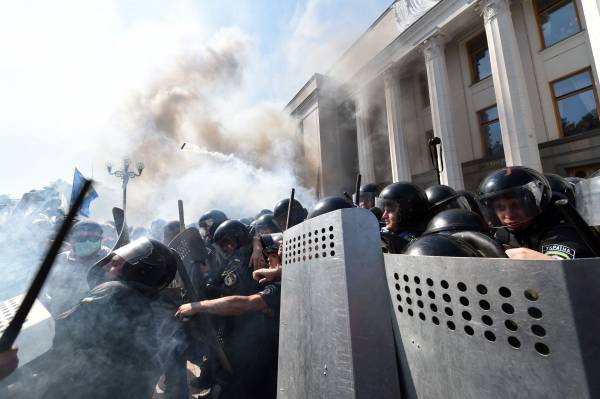 – I agree, unacceptable. When August 31, 2015 Parliament in the first reading voted changes to the Constitution on decentralization, under the walls of Parliament killed four national guardsmen.

– Why? At the time of voting amendments to the Constitution under the Parliament, protested against this. Moreover, the text of the amendments to the Constitution on decentralization is imperfect, so there is also clause 18 of the transitional provisions is to “ascertain” “On special order of local government in certain districts of Donetsk and Lugansk regions”. Until today nobody knows who threw the grenade at national guard (in production about the attack are Igor Gumenyuk, who is accused of throwing grenades, and Sergey Krainiak, who allegedly staged a smokescreen. Both do not recognize the guilt – approx. ed). But after this tragedy, the process of change of the Constitution regarding the decentralization stopped.

It was a controversial decision, the COP that changes to the Constitution in the second reading may be taken at the next regular session, and any of the following, which is not necessarily the next…

– Article 158 of the Constitution clearly says, if at the next regular session finally, a decision was taken on the bill, then only a year to serve in the Parliament and start the process again. But what to do? Actually “froze” the bill, waited for a situation when it is possible to vote “on any of the next session” due to this idiotic decision of the COP. Differently just can’t call a decision on the principle of “what would you like?”. And if the situation turns so that you can vote changes to the Constitution on decentralization in the second reading, if it will be 300 votes, will do it at any time. Because you will have to fulfill the Minsk agreements, which is prescribed at the constitutional level to fix the special status of the Russian-occupied areas of Donbass. As you’ll recall, was adopted in 2014, the law that shamefully a special status called “special order of local self-government”?

16 September 2014 off the scoreboard in Verkhovna Rada…

– And if suddenly the government will try to deliver to the Parliament a final vote on constitutional changes on decentralization with clause 18 of the transitional provisions, which recorded a special status, it can cause explosive processes in society.