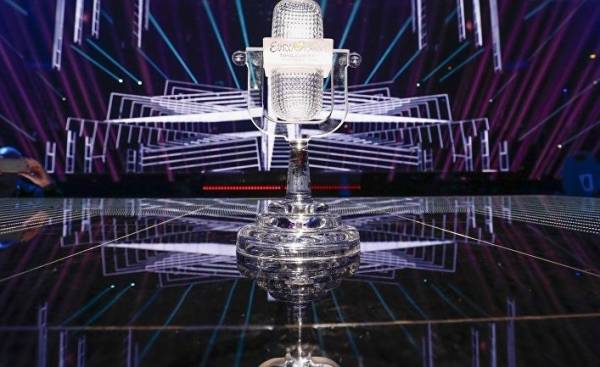 Director of production of the Eurovision song contest-2017 Olga Melzig stands in the center of the main hall of the International exhibition centre of Kiev.

On a stage built in the gym, lowered lighting, reminiscent of the grapes. Now they set the camera.

The first semi-final of the Eurovision song contest this year will hold in this hall two weeks later, on may 9. The final will take place on Saturday in the same week.

The group, led by Melzig, organized the venue for the Eurovision song contest just over a month. Construction work began on 27 March. Now set the camera and the last spectator chairs. A group of people are painting the concrete floor in black.

The construction is in its final stage, as it should be. Main stage and beyond, wall light finished, like a small stage for the leading and the place where the speakers will wait for their scores for performance. Lodges resemble cropped diagonally across the pipe.

Outside the International exhibition center, the atmosphere seems a bit more chaotic. Everywhere you can hear the sound: workers lay new pavement on the place they dug up the sidewalks.

“All the organizers need help, because at the Eurovision song contest broadcaster will have to broadcast the most difficult gig in the world,” says Melzig.

“Eurovision — it’s as if you went to McDonald’s and ordered a pizza. State television and radio that take the Eurovision song contest, do not know the secrets of organizing such a Grand event. And they don’t have to know them, it’s none of their business,” she says.

Melzig took an active part in the early stages of construction, because it has a main requirement: the design must withstand the weight of a hundred tons. Around must be a lot of space, even the space of the great hall may not be enough to hold this event — to be allocated even their own generators.

“Chosen by the organizers the venue of competition determines the details of construction of the stage. Here for example, we had to build a big and wide scene because in this chamber can only be such. And, for example, a covered arena, Hartwall Arena in Helsinki was enough and the scene less”.

Scene weighs 30 tons and a surface area of 350 square meters.

Every time the competition is different, because the host country’s own distinct culture and its own political situation.

Melzig participated in the conduct of the Kyiv Eurovision of 2005. Now everything is slower and a bit heavier, and that’s a good sign. Because the slowness stems from the fact that in transactions arranged tenders.

“The hardest to organize Eurovision in democratic countries,” says Melzig and laughs out loud.

This year the hall will be slightly larger than last year. Capacity — about nine thousand people.

And, in fact, the show itself. What can we expect?

The TV program will consist of two parts. The contest and show host broadcasting company of the country. According to Melzig, it is worth seeing.

“Ukraine will give their message to the world. Will tell how it originated, where it is now and where it is going,” she says.

“It will be a lot of creativity, which is annually present in the speeches of Ukraine at the Eurovision song contest. This creativity we are going to show the world”.

The representative of the press service of the Eurovision song contest-2017 Pavlo Shilko said that Ukraine has something to show.

“Over the past years Ukraine was remembered by the world, largely by military action. We want to show that significantly advanced. This is a great opportunity to demonstrate their mental strength,” said Shilko.

He recalled that, despite the continuing war in the East, Kyiv is a European city. No problems with security, no.

And about the show.

“We combine tradition and modernity. Will not only the Cossacks.”

The motto of Eurovision this year — Celebrate Diversity, “Celebrate diversity”.

According to Shilko, with the slogan goes well and that this time the leading — three men.

“Things are different now. Once the leading was some girl.”

When you come out of the hall, it is hard to imagine that inside the building soon will take place the Eurovision song contest. On the bright building with Golden glass surfaces still no banners.

Exhibition center, however, is not the only place where all the work is completely dedicated to the Eurovision song contest.

State TV and radio company of Ukraine is located in the building of the Soviet era, reminiscent of the tower, which is fit to convert into a Museum. On her 14th floor Yaroslav Kaminska involved in the organization of work of volunteers at Eurovision.

900 volunteers will assist delegations, to perform security tasks and to work in the press center.

In Ukraine there is no hype about the Russian participant

On trees in Kiev now shoot forth leaves, and in the evening Khreshchatyk, main street of the city, strolling people.

“I always stress that Eurovision is not a political event,” says Elina Sukach.

“Russia thinks so too, but then she began to engage in provocations”.

Sukach, of course, is referring to the sensation of the Eurovision song contest this year.

In March, Russia put forward a candidate Yulia Samoylova, from his childhood confined to a wheelchair. Samoilova performed in 2015 in the Crimea, which Russia invaded in the spring of 2014.

According to the international legal status of Crimea belongs to Ukraine. Therefore, Ukraine considers the visit to Crimea violation, and the singer Samoilova received a ban on entry into the country for three years.

First problem was trying to decide, but Russia did not agree to send someone to replace Samoilova, and Ukraine refused to cancel the restriction on the entry.

According to Deutche Welle, the head of the European broadcasting Union Ingrid Deltenre (Ingrid Deltenre) threatened to ban Ukraine make Eurovision, if the country does not make concessions.

In the end, Russia said it will not participate in Eurovision. Press Secretary of the Kremlin Dmitry Peskov said that “the organizers do not comply with their own requirements”.

In Ukraine, many thought the choice Samoilova provocation. Russia has chosen Samoylova without an open vote.

Sukach, who moved to Kiev from the Crimea, I do not think about Samoilova. She is very excited about the upcoming Eurovision song contest.

“This is a significant event. The Eurovision seriously,” she says.

She has no tickets for a single stage of the contest, but she plans to watch Eurovision live.

The story of Samoilova, it seems, has excited few. In relations between Russia and Ukraine have bigger problems.

Julia A., which collects on the Maidan money to help wounded soldiers, said that nothing was heard about the scandal with the singer. About Eurovision — of course.

“This is a great event. It’s a small victory for Ukraine is that the competition is carried out here at this time”. 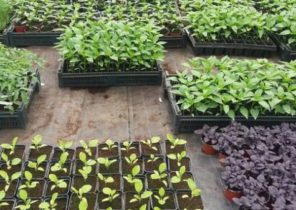