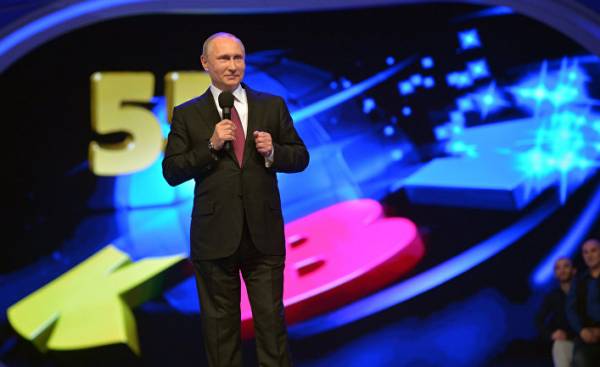 Despite the fact that since the collapse of the USSR has been more than 25 years, in Russia continue to feel nostalgic for Soviet times and dream of recreating the “big and friendly” Soviet family under the “wise” leadership of the Russian people.

The paradox is that most Russians are experiencing on an emotional level extremely negative attitude toward immigrants from the former Soviet republics, especially Ukraine, Central Asia and the Caucasus, can not get rid of the need to constantly see them next to each other, to taunt them, to come up with funny stories and anecdotes, as it was in Soviet times. Thus the people of Russia like to lift their self-esteem and satisfy the Imperial ambitions against the backdrop of economic degradation and failure in absolutely all spheres of its development.

One of the permanent symptoms of this particular syndrome is show KVN, which is broadcast in Prime time on the Russian channel. It’s an old idea, which arose during the Soviet era, today turned into a personal family business Maslakovic where unknown comedians get paid a lot of money to get on the big screen under the guise of students and to seize the last chance to acquire a wide popularity.

Despite the fact that the concept of the show is borrowed from the Komsomol matinees 50-XX years, and the level of jokes can compete with a similar show Yevgeny Petrosyan, the WHC for many years, is one of the most popular entertainment programs on Russian television and has a huge impact on Russian youth.

That is why the Kremlin is actively using the KVN for propaganda purposes. Almost always in the repertoire of various commands contained anti-American or anti-Western jokes, jokes about gays and immigrants and, of course, there are always skits, praising Russia and its leadership. In gratitude for these services in November 2016 one of the concerts of KVN, even personally visited by Vladimir Putin.

In addition, the show misses no opportunity to support Pro-Kremlin separatists — so, one of the most popular members of the “KVN” for several years there was a team from the occupied Abkhazia, popularized and glorified the Abkhaz separatist regime.

Against this background, more amazing looks at the emergence of this ideological incubator wit team calling themselves “Team Georgia.” This week they made the air of the Russian First channel showed the level of humor that can cheer is that working with Uralvagonzavod.

Not surprisingly, the team who came to conquer the main propaganda channel Russia (in Georgia about them nobody knows anything), portrayed the image of Georgians of Soviet jokes, which had disappeared from reality, but continues to live in the collective consciousness of Russians, burdened with complexes of the “titular nation”.

There is no point in repeating all the nonsense, announced from the stage that the so-called “Team of Georgia”. It is enough to mention a song about “Orthodox archies” (as they called themselves and the entire Georgian people) to understand the level of their intellectual development.

Against the background of economic developments in Georgia in recent years and visa-free regime with Europe, jokes about “Givi, which must be the ballerina in every Russian city” look just shamelessly plagiarized from greasy anecdotal collection 1980-XX years.

However, his own imagination of these clowns is also shown and was pleased with Putin’s electorate is the song mocking the former President of Georgia Mikheil Saakashvili.

Then they were joined by the famous Russian ballet dancer Nikolai Tsiskaridze, who stressed how “as well in Russia got the Georgians” and proposed a toast “for the art of uniting Russia and Georgia.”

Here’s a representation for the mentally retarded, the ensuing broadcast of Russian television, is the way relations between the Georgian people and Russia as it is represented in the Kremlin.

Stupid, uneducated, and stupid — such in Russia want to see their neighbors, to make them easier to manipulate and subjugate its influence.

“Georgia” is a typical example. On the way to Moscow, they did not stop nor the 2008 war, nor the occupation of Georgian territories, nor the daily suffering that brings Russia to the Georgian people.

It is obvious that for young people, with no outstanding abilities, who failed to get famous even in their own country, and I certainly don’t claim to Western level of development, participation in the Russian ideological show is the only opportunity to somehow realize themselves in life.

Today, Georgia has developed a whole range of political and public figures who receive funding from Moscow and openly defend the interests of the Kremlin. Attempts of the Russian leadership to find supporters in Georgia apply to absolutely all areas, and even humor is no exception.

The Georgian nationality is a sought — after commodity that always sells well in the countries that wish to enslave Georgia. Only of the millions of Georgians only dozens have agreed to bear the stigma of traitors.

And if the names of their heroes, the people of Georgia reveres and passes from generation to generation, the names of the traitors quickly forgotten and disappear into the dustbin of history, as images they are trying to portray.

World war II: American bombers in the defeat of Dresden