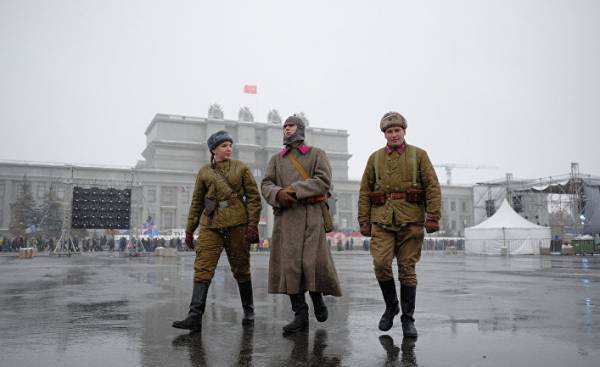 What to do when the army destroyed, and again and again? For Russia in the mid-twentieth century the answer to this question was clear: to create a new army.

In the period from 1918 to 1942 the Russian army was destroyed and recreated four times: once at the end of the First world war, then at the end of the Civil war in Russia, then in the years of the great purges and then in the first six months of operation “Barbarossa”. The recently published excellent work about the history of the red army debunk established myths and show how resilient and innovative were the armed forces of this country, despite terrible political turmoil and difficulties.

Such cycles of death and rebirth of the red army carry many lessons for those who study modern armed forces. The red Army prevailed and defeated for several reasons: it has retained (often at the cost of huge losses and difficulties) military tradition of its social basis; she freely and in large quantities (but reasonable) borrowed the experience and technology of others; and she adapted the (sometimes awkward, but often very practical) to the specific political conditions of Soviet Russia. These lessons retain their advantage for the United States, who continue to rebuild the armies of other countries under the slogan “partnership”.

The Imperial Russian army in the second half of the First world war acted more effectively than commonly believed, especially given the quality of the German troops with which she had to fight. In the famous Brusilov breakthrough was exclusively used innovative battle tactics in many ways ahead of everything that was used on the Western front. But the tsarist government lacked the political skills to survive the hardships of war. Kerensky’s provisional government was no better; by 1917, the army began the riots, and she began to suffer defeat.

Then came the revolution, and after the Civil war. At the beginning of the red army were many of the king’s officers, who (often at risk to themselves) gave her a certain professional traits. But in the Civil war in Russia had few modern technical features of the First world war. The cavalry were galloping across the steppes, getting involved in the fighting with varying success, and often acted without artillery and air support. Of course, during the Civil war was the traditional fighting and battles, for example, during the Polish-Soviet war of 1919-1921. At the end of the Civil war, the struggle for the future of the army and for its character. Political needs of the Bolsheviks in the preservation of their own power, sometimes contrary to the needs of the army in maintaining the combat readiness and modernization. Officers with experience of service in the Imperial army remained politically unreliable. However, many of the key military leaders (primarily, Mikhail Tukhachevsky) tried to join the Royal military tradition with the experience of the Civil war and the needs of the new Soviet state.

At the end of the Civil war, Soviet industry turned out to be very low. The chaos of war and revolution led to the destruction of a significant part of industrial infrastructure, as well as to supply disruptions and lack of investment. The Soviet elite had high hopes that the emancipation of the proletariat will lead to massive increase of production and innovation, but these expectations are mostly not materialized.

But thanks to a strong investment and public investment due to concerns about the security of the Soviet Union on its borders the Soviet military industry in the late 1920s and early 1930s, years suddenly showed its high performance and innovative character. I must say that in the early 1930s, Soviet industry was able to create military hardware that can compete with any army in the world. In fairness it should be noted that some of the other major powers in this period were given a breather of its military industry and has not invested a lot of money. Germany it was forbidden, but France, Britain and the United States have focused on civil aspects of its economy. But Soviet industry is very much borrowed from the West, purchasing military equipment, machines and licenses as rigid export controls on military equipment did not exist.

Technical revolution was accompanied by significant progress in military science and doctrine. The red army emerged from the flames of the First world and Civil wars, had many shortcomings, but she had the almost unique advantage of realizing the necessity of the combination of mass and maneuver. Cooperation with the armed forces of Germany in the years 1927-1933 gave the Soviet officers an opportunity to test their most radical ideas, comparing them with the art of war a powerful and experienced opponent. By the end of this period, “theory of deep operations”, which was attended by innovative elements of offensive maneuver. These elements survived until the 1980-ies the doctrine of air-land battle the U.S. army.

And then began the cleaning. Developing a reasonable and even a radical system of warfare, which combined massaging shock and maneuver, and backed by this doctrine of military equipment, capable of withstanding a load of modern warfare, the Red army became the most effective ground fighting force in the world.

And suddenly Stalin decided that he should settle the score. The exact figures of the great purges in the red army, unknown until now. Subjected to a cleansing officers eventually returned to service, and someone very quick shot. But there is no doubt that the most advanced thinkers and innovators of the red army fell victim to Stalin’s paranoia. Among them were many of those who have learned a lot from the German army.

Costs cleansing soon became evident. Although the Red army proved itself in the fighting on Khalkhin -, acting against a lesser opponent during the Finnish war it suffered a crushing defeat from a tiny country, lost in three months 150 thousand people dead. Smart people in the army and beyond understand the issues, but are unable to solve them, while the Red army received a series of crushing blows of the Wehrmacht.

Neither Civil war, nor Stalin’s purges — can’t compare with what happened with the red army from June to December 1941. The Wehrmacht with its allies inflicted unimaginable defeat the Soviets by destroying ground forces and aviation of the red army in forward areas for the first few weeks of the war. In the first battle of Kiev, the Germans destroyed and captured more than 600 thousand Soviet soldiers. Part of the problem was due to shortage of equipment. The red army at the time, rearmed too quickly, and the bulk of its huge tank and aircraft fleet for ten years out of date. There were other problems: poor training of the troops, and inexperienced officers and a disorienting political demands, sounding from Moscow.

But already in the first weeks of the war the Germans realized that the Red army is not broken. She retained the ability to mobilize and training new recruits with their subsequent sending to the front line. It has preserved its military-industrial base, throw it to the East of the Ural mountains, and by December of 1941, Soviet industry has already supplied advanced troops with modern tanks, which the Germans did not have. Soon Moscow was sent to the front equipment, obtained under lend-lease from Britain and the United States. And most importantly, the surviving officers and soldiers have learned the mistakes of the first years of the war, which helped to radically increase the organizational efficiency of the army. From the camps back subjected to purges of commanders and military high command learned how to behave with Stalin. The red army has become a huge and effective killing machine in 1944, but its potential revival became clear in December 1941 near Moscow.

We can learn a lot from the experience of the red army. After the Vietnam war the army and the U.S. air force faced a crisis that seemed to threaten their very existence. To resolve this crisis, they were able partly thanks to the creative interpretation of traditions. Of course, no military organization in American history not going through the cycles of destruction and rebirth that had to endure the red army, but in the last decade, the United States had to solve the problem of rebuilding the armies of the partner countries, such as Afghanistan and Iraq. A careful study of how the red army managed to keep the military tradition of tsarist Russia, despite the purgatory of the revolution, can provide useful lessons about how the armies of Afghanistan and Iraq to establish contact with the local population.

Robert Farley is a frequent contributor in The National Interest. He is the author of The Battleship Book. Petersenovskaya Farley teaches at the school of diplomacy and international trade (Patterson School of Diplomacy and International Commerce) at the University of Kentucky. His work includes military doctrine, national security, and Maritime Affairs.