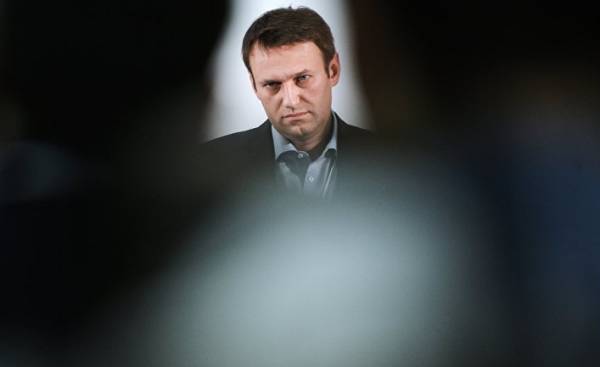 Alexei Navalny is a dangerous man. That was the absolutely clear message to the students of the University of the Russian city Vladimir. This week they gathered in a large meeting and showed a film in which the leader of the Russian opposition called vile criminal. And this was only the beginning. Bulk is so dangerous that it can be compared with Adolf Hitler, argued from the rostrum of the regional clerk after the film screening.

“You know that now there is a deliberate war against the Russian Federation. Information war, cyberwar, and the emphasis is on youth,” said, according to local newspaper “Provladimir”, Alla Byba, head of the regional law schools for the prevention of extremism among young people.

Not the first time Russian authorities are using heavy weapons against the opposition leader, who said that the presidential elections of 2018, he announced his candidacy as a rival of Vladimir Putin. And in recent weeks the activities of the Russian authorities intensified. Wednesday, social media was circulated another video with the same message. “Hitler 1945/Bulk 2018” is the title of the movie showing next to Hitler caricature manipulation with a photo of Navalny with the Nazi armband.

“Nazi corpse begins to decompose, when he raises his hand in a Nazi salute,” says an anonymous leading a professionally trained voice.

The new campaign began after Alexei Navalny last month called for new protests against corruption in the government of Vladimir Putin. Unexpectedly for seasoned politicians to take to the streets of more than 60 thousand people in 82 Russian cities. Only in Moscow were detained more than a thousand people, in particular, the leader of the opposition. The protests were supported by the youth and people with higher education who are familiar with the news first on social networks and not on TV.

The estate in Tuscany

In the presidential administration in the Kremlin, sounded an alarm bell. Until recently there, according to the main analysts, was thought that Navalny was an issue but not a real threat to the popular President Putin. So now you must completely suppress information about the tireless fighter against corruption Navalny and his investigations. His name should not be mentioned in the official review at the government level.

But Navalny’s anti-corruption campaign in recent times has a strong effect. A map of the Empire of ownership, in particular, of the vineyard in Tuscany, owned, allegedly, Prime Minister Putin, Dmitry Medvedev, has received 19 million views on Youtube. And in less than a month Medvedev lost 10% of the votes in the polls, although the state TV channels not a single word is mentioned about these charges. What happens if you pop a similar video about Vladimir Putin is a hot topic among Russian political soothsayers and fortune tellers.

The Kremlin does not want to risk it. Four sources told the TV channel “Rain” that the presidential administration after demonstrations created command headquarters, whose task is to wage a campaign against Navalny before the election in March next year.

According to the channel, the initiative comes from Deputy head of Putin administration Sergey Kiriyenko. Chief strategist fears that Navalny’s campaign against corruption and an incredible wealth of officials in power can thwart “beautiful big victory” of Putin in the country, where 23 million people live below the official poverty line. Therefore, the Kremlin responds with a release of their own commercials that, according to the plan, should become a real hit among young people.

“They do video, clips and a small computer game to discredit Navalny. They struggle with him, as with Hitler,” says a source to the TV channel “Rain”.

This is not the first time. Before the parliamentary elections last year, one Russian TV channel showed a leak sex video with Putin critic Mikhail Kasyanov and his Secretary and secretly carried out audio. This shocking video inflicted political wound to the veteran of the opposition.

Despite all the difficulties

Navalny fights with election difficulties. It had just been released from prison where he was serving a two week sentence following the March demonstrations. He opened campaign offices in several Russian cities, but, according to the Kremlin, Navalny still has no right to stand as a candidate. Navalny still has a suspended sentence after process 2014 — according to him, the verdict was a political act.

At the same time last campaign against Navalny focus on the real tensions that have arisen in some part of the opposition as a result of his attempts to unite the liberal and national conservative forces. Navalny had previously used nationalistic slogans, and although he lowered the tone of his rhetoric, he nevertheless remains, in contrast to the Kremlin, in favour of limiting migration from Central Asia.

Against this background, the comparison of Navalny with Hitler could easily turn into a riposte. At the same time a loud campaign and preventive lectures in schools and universities can contribute to the dissemination of information about the opposition candidate in an election year, and the attention to his fight against corruption can be the deciding factor.

But the Kremlin can no longer pretend that the Bulk does not exist. During the annual speech of Dmitry Medvedev in Parliament on Wednesday the Prime Minister was directly asked about vineyards. Medvedev replied evasively that he would not comment on “false accusations of a political charlatan.”

Thus, again began to talk about the revelations of corrupt Bulk. As a result, under Putin’s Prime Minister has rattled the chair.