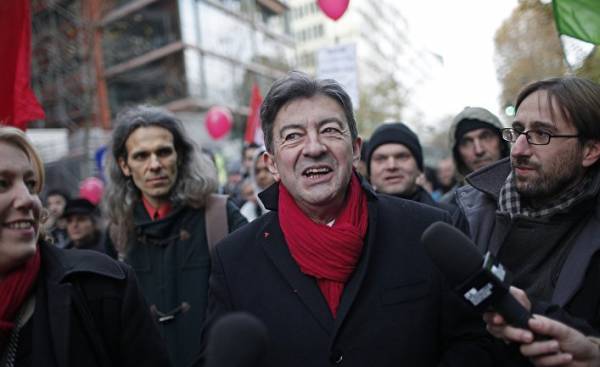 A number of experts on Russian history, sociology and political science judging the wrong assessments and trade-offs the leader of the “Rebellious France” against the regime of Vladimir Putin.

Here already at least a century in French politics there is a split on the question of Russia. Although the alternative to Soviet times (the rapture or rejection), apparently, in the past, desire for leadership figure and critic of American imperialism nourish pandering to Vladimir Putin, who is at the helm of the country since 1999. At first it embraced the far right and of the right, and in recent years spread to Jean-Luc Mélenchon. In March 2015 he called a “political bully” Boris Nemtsov, whom shortly before he was shot in two steps from red square. Mélenchon, of course, responded to this criticism, shrugged off the idea of “relations” with Putin and recognized the existence of an atmosphere of violence in Moscow. However, these explanations do not seem satisfactory. Application of a candidate from the “Rebellious France” in Russia and Ukraine are contrary to our personal experience, our research and many investigative journalism. Moreover, they often echo the positions of the Russian government, which is simply unthinkable for a person who is not the first month criticizes the French “official media”.

This is primarily related to its estimates of the Russian authorities. At a rally in Le Havre March 30, Mélenchon said: “I struggle with Putin’s policies, but (…) I do not agree to be a part of a club of raving that hope at the beginning of the conflict with Russia, as it is monstrous. I am for peace.” His Advisor on international Affairs of the George kuzmanović (Djordje Kuzmanovic) said on March 28, the Association “Franco-Russian dialogue” that the post of President of the Republic Jean-Luc Mélenchon would have established “a warm and (…) a partnership with Vladimir Putin or any other President elected by Russians”.

Focus on its rhetorical structures that the strong criticism of Putin implies a desire for war with Russia, and that Putin — it is a normal head of state. Such language is smooth against the regime, which, despite the appearance of pluralism, was formed by a former secret service agent who arranged for the arrival in the Kremlin the horrific war in Chechnya under the pretext of “anti-terrorist operation”. Since the mid 2000-ies of the presidential elections in Russia, the inherent impossibility of participation of opposition candidates in a reasonable democratic conditions: the lack of debate on radio and television, the restrictions demonstrations, violations at polling stations and intimidation including physical violence. Although Mélenchon openly denies these facts, he, consciously or not, pushes them into the shadows. His views on Russia and Ukraine in the debates confirm this on a number of points.

First and foremost, we are talking about his mistaken assessments of the Russian opposition. She lined up in the course of the winter 2011-2012 demonstrations against election fraud and corruption, and covers the “liberal” party (close to European social Democrats), part of the nationalist movement, including the lawyer and blogger Alexei Navalny, environmentalists and human rights activists, and Marxists of the “Left front” (the movement which is now behind a lattice Sergey Udaltsov). Given their coalition against Putin and Medvedev, to oppose them to each other is absurd, despite their heterogeneity.

Called Nemtsov “a fanatical liberal,” as did Jean-Luc Mélenchon in the blog in March 2015, was entirely unjustified, since the year before the murder, he has organized a “peace marches” (15 and 21 September 2014) against the war in Ukraine. Personal enrichment Nemtsov during his career was insignificant in comparison with the actions of Putin and Medvedev, have provided control of their environment over the entire Russian economy. As for Bulk questionable statements on the Holocaust and Jews in 2013, they are no longer heard in his speeches. At the same time, he enlisted the support of a considerable part of the public investigations of corruption at the top of Putin’s state, as evidenced by the success of the demonstrations on 26 March.

Not the best impression and opinion of the candidate “Rebellious France” on the protests on the Maidan in 2013-2014, despite the fact that similar meetings in USA, Spain and France welcomed him. According to many experts, it is about revolution, which (as the events in Petrograd in February 2017) formed a motley coalition against the President of Ukraine Viktor Yanukovych. He was democratically elected in 2010, however, alienated a part of community in Kiev and in the West (especially the youth), when turned away from the European Union and created a corrupt oligarchy. He provoked his own overthrow, giving the order to open fire on a crowd of demonstrators on February 20, 2014 (75 dead).

The official Russian media saw this as a joint operation of the CIA, NATO and the EU for the formation in Ukraine of the fascist regime. Mélenchon followed suit and attacked the “adventurist, putschist and neo-Nazi government”. Although independence and was ultra-right elements in favorites in October 2014, the new Ukrainian Parliament there are only about 30 representatives of this current (when the total number of seats in the 450), which gained 15% of votes. Dozens of Pro-Russian activists actually died during a fire in Odessa on 2 may 2014, and the atmosphere of violence continues in connection with the war in the Donbass, which has already claimed 10 thousand lives in three years. Anyway, the Ukrainian government is not fascist.

Consider the situation in the East of Ukraine. Writer Andrey Kurkov wrote in March 2014, referring to Vladimir Putin: “I don’t need to protect me, and I demand immediate withdrawal of Russian troops from Ukrainian territory”. Russia has indeed committed an act of aggression against neighbor: the invasion and annexation of Crimea after a referendum undemocratic, the outbreak of the conflict in the Donbas with the help of irregular forces for the formation of a protracted low-intensity conflict, with the support of special forces and armored vehicles. The statements of Minister of Mélenchon that “different powers and particularly the United States and Putin used part of the country in their own interests” are a set of stereotypes. In addition, he says, “as for Putin, we draw the line between its domestic and foreign policy. He is a Russian nationalist, and liberal”. Understand this: the first characteristic is acceptable, the second is not.

New current of Russian nationalism draws and part of the opposition: the Communist party and Udaltsov (Mélenchon openly supported this opposition) approved the annexation of the Crimea. As a result of such partial support, and repression from the authorities “Left front” has lost many members and almost ceased its activities. One of its founders, Ilya Ponomarev is now in exile in Kiev. Anyway, in addition to the Bulk, which offers an intermediate path by carrying out in Crimea of a new referendum, there are other Russian policies that could bring change in Russia. In such circumstances, the support of only one of the “Left front”, as does the leader of the “Rebellious France,” only plays into the hands of the authorities.