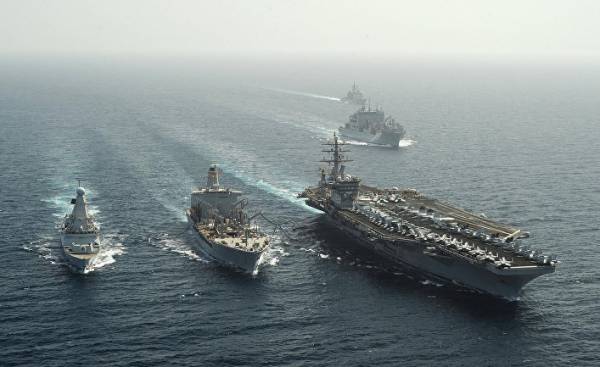 As on the Korean Peninsula tensions, Admiral Harry Harris (Harry Harris) made a surprise announcement: the aircraft carrier was ordered to stand down the eighth of April from the shores of Singapore and heading North to the Western part of the Pacific ocean.

Press Secretary Harris led Pacific command of the US armed forces have linked this directly with the transfer “the number one threat in the region” — North Korea and her “reckless, irresponsible, and destabilizing program of missile tests and the desire to develop the capacity to produce nuclear weapons”.

The Minister of defense of Jim Mattis (Mattis Jim) told reporters on 11 April that “the way” aircraft carrier “Carl Vinson”. President trump in an interview with Fox Business Network, which aired April 12 on the question of the transfer of the ships said: “We send in the Armada, very powerful.”

The American media have intensified, and April 14, Fox Business Network reported that the carrier group “heads” to the shores of North Korea.

But, judging by the pictures posted of the U.S. Navy, it is not so — or at least not yet.

In the photo published by the Navy, see the aircraft carrier, which is Saturday, April 15, was in the calm waters of the Sunda Strait between the Indonesian Islands of Sumatra and Java. Judging by the photos of the U.S. Navy, later that same day, he was in the Indian ocean.

In other words, the very day when the whole world anxiously watched a Grand military parade, hosted by North Korea in honor of the birthday of the founder of the country Kim Il-sung and when the media talked about a preemptive strike of the United States, the Navy, the U.S. sent the aircraft carrier “Carl Vinson” and its accompanying group of two missile destroyers and cruisers to the other side. 4.8 thousand kilometers to the southwest of the Korean Peninsula, more than 800 kilometers to the South-East of Singapore.

Instead of holding the course on the Korean Peninsula, carrier strike group actually went in the opposite direction to take part in the “planned jointly with the Australian forces exercises in the Indian ocean,” according to the publication Defense News, which first wrote about it.

Asked to comment on the situation, representatives of Pacific command and the Pacific fleet has not yet responded. On Monday, the official representative of the US Pacific fleet second rank captain Clayton Doss (Doss Clayton) said only that the aircraft carrier “Carl Vinson” and its attendant group of ships “follows the waters of the Western Pacific ocean.” He declined to specify a precise location of the ships, saying only that in the waters off the coast of South Korea or Japan they are not.

The presence of American strike aircraft carrier groups and the threat of the application of the United States military strike on North Korea seriously influenced the views of Chinese rhetoric and local media. Foreign Minister Wang Yi (Wang Yi) has warned that going to “storm clouds”, and increases the risk of conflict.

On Tuesday, the Chinese media greeted the news that the ships are not where all assume with some glee.

“It is necessary so to cheat! — gleefully wrote the publication Global Times on the page in social networks. — None of the American aircraft carriers, which are so desperate looking forward to South Korea to see!”

Was this a misunderstanding or deliberate confusion of the situation?

Cai Jian (Cai Jian), expert of the Center for Korean studies at Fudan University in Shanghai, believes that this is “psychological warfare or a bluff”, which is part of an elaborate game waged by the United States. He argues that Washington really was never going to launch a military strike on North Korea right now.

“At the peak of the confrontation of psychological warfare is very important,” he says.

According to Ross Babbage (Babbage Ross), freelance senior researcher at the Center for strategic and budgetary assessments, a Washington think tank specializing in military issues — it is possible that this step is “military signal” of the United States.

“This is more than a bluff, he says. — Bluff means a lack of serious intent. And the current US administration, as I understand it, not joking and acting very seriously. Attempts to force North Korea to abandon nuclear weapons have been taken 40 years.”
According to Babbage, is not excluded that the administration trump decided before sending a carrier strike group to the North to give China a little time that he put pressure on North Korea. Trump met with his Chinese counterpart, President XI Jinping (Xi Jinping), 6 and 7 April, and 11 April, spoke to him on the phone. Therefore, it is possible that he wanted to give the Chinese some “breathing room” before you begin “influence” (on North Korea), says Babbage.

And by itself the presence of the carrier should not be given too much importance, he added, since any pre-emptive strike on North Korea, it could perhaps cause using the long-range aviation.

Mattis said the US administration to solve the nuclear program of North Korea is closely cooperating with China.

“You know the leader of North Korea once again foolishly tried to arrange some kind of provocation, launch a rocket, said Mattis journalists on Tuesday on the way to Riyadh, Saudi Arabia. — This explains why we now, after a meeting in Mar-a-Lago, working closely with the Chinese to try to get this under control and to achieve a Korean Peninsula into a nuclear — free zone- what is a common interest of China and the United States, South Korea and Japan.”

That the aircraft carrier “Carl Vinson” has headed in the direction of Korea, the world media reported as an undoubted fact. While the press and have been hints that he might be sent there not as fast as we anticipate. April 11, Bulletin of the Institute of the naval forces reported that the carrier had canceled visits to Australian ports, however, he did not cancel the participation in the exercises in order to accelerate its movement toward the Korean Peninsula. And he would need another week, to enter the waters off the coast of Korea. Just this item and missed out on the background of the sensational reports about the “war”.

Judging by the other photos published by the US Navy, the aircraft carrier “Carl Vinson” from 12 to 14 April was in the South China sea.

Whatever it was, it is possible that a carrier battle group is now in fact still heading North.

Citing an unnamed South Korean officials, Korea Herald reported that “strike carrier group will join the naval forces of South Korea to conduct large-scale naval exercises, the purpose of which is to counter provocations from Pyongyang”.

CNN also quoted representatives of the Ministry of defense of the United States, said that the aircraft carrier will arrive to the shores of the Korean Peninsula at the end of April.