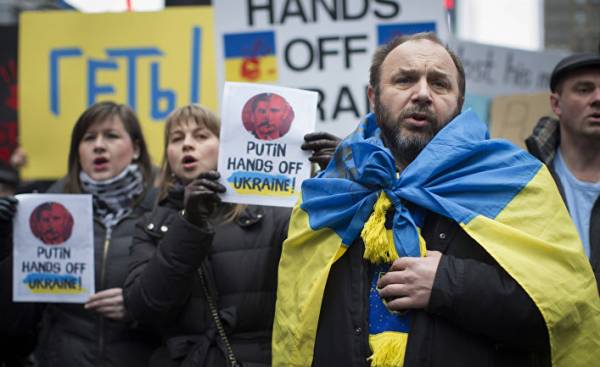 Does not happen aggressive Nations are aggressive regimes, considers the Russian expert Andrei Zubov. And he adds: the regime of Putin is already close to Nazi Germany. Teeth visited Kiev to speak at the 10th Kyiv security forum. NV wrote the text of his speech.

I’m sorry that my country had caused such trouble Ukraine and I apologize for that. Yesterday I watched the movie, and felt how the Germans feel when they show that created the Nazi regime with other Nations during the Second world war. I feel the same way. Everyone was shocked by the actions of the Germans, but the Germans themselves were shocked twice more. I am in a similar condition.

On Russia today saying she is in a state of endless war. Exactly the same as Germany in the early twentieth century: everybody was saying Germany will fight endlessly, this is the eternal aggressor nation because of the Franco-Prussian war, First world war, the Second world war. Believed then that Germany is the cause of all wars in Europe. Churchill recommended to divide Germany, to exclude the possibility of war with her in the future, and to further other countries could not so agressirovat in Europe. Coalition have done differently: there was one Germany, but it is demilitarized, destroyed Nazism. There were four program changes during the time of Chancellor Adenauer. Now we see a different Germany, was not aggressive, one that is a pillar of stability in the EU. It is impossible to imagine the European part of NATO without Germany. Germany has ceased to be the center of aggression, and became the center of the world.

Russia now has two chief goals — decommunization and deputinizatsiya. These two goals are connected and interdependent. Because Putin — the continuation of the Communist totalitarian mentality. He’s KGB, a typical representative of his organization, because the KGB was the main base and pillar of the totalitarian Communist regime. Stronger than the Communist party itself. And the mentality of Putin — the man in the first half of the twentieth century, the man may not be all social.

I believe that the main reason for Russia — the struggle with the regime. Not personally with Putin, because with him there is also his associates, the same generals of the KGB, the only other. You need to struggle with the remnants of the Communist past in our mentality, in our politics, everywhere. Not only in terms of monuments or Mausoleum. Of course, it is important to erase from the life of these elements, but the overall problem is much worse. In Russia, we look at the countries of Central-Eastern Europe. On how to conduct de-communization in the Baltic countries — the same as Estonia, as it was carried out in the Czech Republic, in Poland, in East Germany. I hope that we will follow their example. I’m a member of PARNASSUS. February 10, our party adopted a special Declaration about the system de-communization. And I hope that it will be the same as held denazification in Germany. And we will have another Russia, which will become the center, core stability and peace and economic and cultural integration in Europe. Not the center of the constant wars, as it is now.

Andrei Zubov, a Russian political scientist, historian, Professor. From the very beginning of the Russian aggression on Ukrainian territory have expressed public support for Ukraine, which, after the annexation of the Crimea was expelled from the University. Today is a member of the people’s freedom Party — PARNAS, the leader of which — Russian public figure Mikhail Kasyanov.